A case for raising the minimum wage

One of the arguments against raising the minimum wage in the United States is that many of those in minimum wage jobs are young workers, either in their teens or early 20s. Such workers the argument goes, either lack experience, or in the case of workers under 18, live at home and don’t rely on their income to meet their basic needs.

There are several problems with this argument. 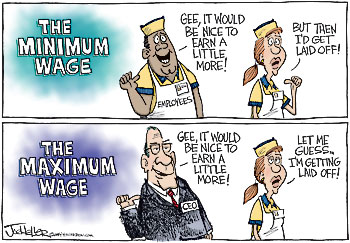 In the first place, there is ample research showing that only half those who earn the minimum wage are under the age of 24. Only one in four is a teenager. For every younger person in a minimum wage job, there is another who is older. For many of these workers, their minimum wage job brings home half the family’s earnings.

But this discussion of whether minimum wage earners are young misses a central point of Catholic thought on just wages: The moral claim of the worker to a living wage is grounded in the worker’s inherent dignity as a human being, not the worker’s age, education, sex or political clout. It doesn’t matter how young the worker is. His humanity entitles him to the living wage.

Further, Msgr. John Ryan, in his influential writings on the just wage, addressed the issue of wages due younger workers. He argued that paying a young worker the same as an older worker was just because it allowed the younger worker to save money to meet needs he or she would face later in life. Doing so would also discourage employers from discriminating against older workers in hiring.

Moreover, the economic realities facing younger workers in Wisconsin further strengthens the case for raising the minimum wage in our state.

An 18-year-old freshman entering the University of Wisconsin in 1968 could hold a minimum wage job and earn enough to cover most or all of the tuition then because the taxpayers and legislators of that period adopted a policy that pegged the UW tuition for Wisconsin residents at 25 percent of the cost of instruction. As a result, the minimum wage jobs I held before graduating from college allowed me to finish school with very little student debt.

Today, college age workers face a different set of rules. Not only is the minimum wage they earn lower in real terms than the minimum wage I earned in the 1960s, but we give those workers less support for their education than my parent’s generation gave me. Today, the tuition at the UW is far higher than 25 percent of the cost of instruction. Today, the average tuition for undergraduate state residents in the UW system is about 71 percent of the instructional cost per student.

It should come as no surprise, then, that student debt is a growing burden for young people today. It should be just as clear that justice compels us to do something about it.

People of good will can disagree over how much and how quickly to raise the minimum wage. But those of us who were treated so generously and justly when we were young should ponder both our good fortune then and our social obligations now as we debate the issue of the minimum wage today.