UPDATE: View the Kickstarter video at the end of this story.

GREEN BAY — Tom Wall, Jr., was in Fond du Lac on business last September when he got the call. His father, Tom, Sr., who was admitted to Bellin Hospital in Green Bay that morning for minor heart surgery, was having complications. 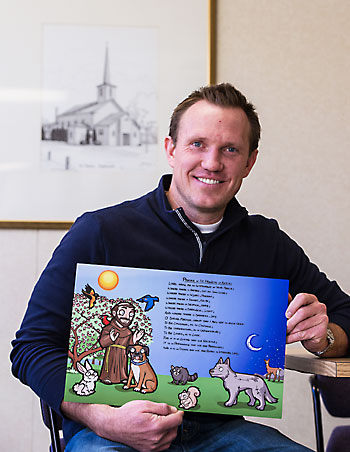 Tom Wall, Jr., holds a poster with an illustration of St. Francis of Assisi and the Prayer of St. Francis. He made the poster as a Christmas gift for his niece and nephews and now plans to create a Catholic children’s book for Lent. He is using the online website Kickstarter to help him raise money for the project. (Sam Lucero | The Compass)

“They actually poked through his heart with a catheter and they had to repair that hole,” Wall said. “Two days later, when they were pulling all of the stuff out, it tore through and he went into cardiac arrest.”

The family was told to begin planning for a funeral. For the next few weeks, they were on needles and pins.

“I spent a lot of nights, for like three weeks, at the hospital, because my mom didn’t want to leave,” said Wall. “In all of that, I am seeing how important my faith was … when I came to this situation.”

He recalled the role his great- aunt, Sr. Mark Szczepanik, a Franciscan Sister of Christian Charity, played in his faith development.

“She lived in California and Hawaii and every year for our birthday … she would send us these kids’ prayer books with a little note inside,” he said, referring to his older brother Francis and younger sister Christine. “So we were always looking forward to her gift. As a kid, I had all of these people who were always supporting my faith formation. That’s when it hit me.”

Wall decided he wanted to pay it forward. He wanted to help his niece, nephews and friends’ children develop their faith, just as others helped him. Thus, the seed for a children’s Catholic prayer book was planted.

With the help of a professional illustrator, Marty Whitmore, whom Wall has worked with to help design and develop materials he uses for training and coaching employees in the dairy industry, Wall took the first step by creating a poster and prayer card as a Christmas gift for his niece and nephews, Jack, Tommy and Sophie. Both feature the Prayer of St. Francis of Assisi and an illustration of the saint.

The next step is a prayer book that Wall calls his Lenten project.

Using the online website Kickstarter to help fund the book’s publication, Wall officially launched the project on Ash Wednesday and it closes on Easter Sunday. He created a video that is posted on Kickstarter to describe the book project.

“My friend Marty will be doing all of the illustration work and I’ll be doing the rest,” said Wall.

He won’t be writing any prayers. Instead, he will be choosing prayers to feature in the book, which he is calling “Aquinas Kids: A collection of Catholic Prayers.”

“We are going to stick to a lot of traditional Catholic prayers, maybe a few things from the Mass,” he said. “I would like to include the rosary, try to simplify explaining the rosary, the seven sacraments, Stations of the Cross — things that kids can get an introduction to.”

One of his favorites, a guardian angel prayer, is based on a childhood experience.

“As a kid, my grandma would be our babysitter,” he said. “Every night before we’d go to bed, she would make sure to wash our faces. The deal was that our guardian angel comes every night to tuck us in and kiss us on our forehead.” 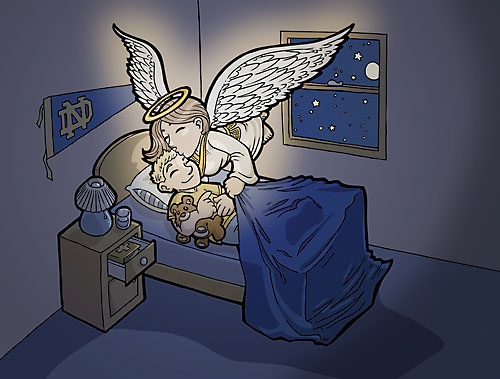 One of Tom Wall’s favorite illustrations in his Lenten book project shows a guardian angel kissing the forehead of a young boy. He said it is based on a childhood experience of his grandmother washing his face before bed so his guardian angel could come and kiss a clean face. (Illustration by Marty Whitmore | Special to The Compass)

While he didn’t like getting his face washed, Wall said he acquiesced to his grandmother’s washcloth “or our guardian angel wouldn’t come.”

“So the prayer of the guardian angel is an illustration of an angel who comes down and kisses a kid, and tucks him in as he’s falling asleep. And we’ve got a Notre Dame pennant on the wall,” said Wall.

Wall said he is dedicating the project to his father, who spent six weeks in the hospital and continues to recuperate.

“My father is on the road to full recovery. There were a lot of people praying for him,” said Wall. That included the Discalced Carmelite nuns at the Holy Name of Jesus Monastery in Denmark, located near his parents’ home.

He said the nuns prayed for the intercession of the late Archbishop Fulton Sheen, whose sainthood cause was elevated in 2012 when Pope Benedict XVI declared him “venerable.”

“When all of this went down, (the nuns) immediately said, ‘We are going to pray to Archbishop Sheen for the intercession of your dad’s recovery,’” said Wall. “I’m really convinced that it was his intercession and the power of prayer that everybody was sending our way.”

Wall’s parents, Tom and Judy, became friends with the Carmelites when the nuns moved from Champion to Denmark in 2002. “It was right around the time my dad was retiring and they just kind of became our new neighbors,” said Wall.

“My dad did a lot of volunteering” at the monastery, he added. “His hobby in the winter is making crosses from trees that we’ve cut down on the land. He has a friend that planes the (wood) and he donates crosses to the monastery.”

He also donates crosses and crucifixes to All Saints Church in Denmark for funerals.

Wall hopes that his Lenten project is successful. He believes the illustrations created by Whitmore will generate interest.

“The illustrations in most prayer books for kids today, are like 1950s,” he said. “They are not very attractive for kids, who have got all of these other books to choose from at night.”

“There are three special ‘religious order’ reward levels as well,” added Wall. The Franciscan, the Carmelite and the Norbertine levels are $295. Each includes 10 books, a large, full-color aluminum print of the saint associated with that religious order and 10 handmade rosaries from the Carmelite nuns in Denmark. In addition, for those contributing to the religious order level, $100 will be donated to a religious charity.

So while other Catholics are giving up something for Lent, Wall’s sacrifice is sharing his faith with a younger generation.

“I probably would have come to this (book) somehow down the road, but it hit pretty strong because of the whole ordeal that my dad went through,” he said.