Is there such a thing as a “Pope Francis effect”? If you use The Compass Facebook page as an indicator, the answer would be an indisputable yes.
On the heels of the pope’s first anniversary on March 13, several polling outlets released surveys about the influence of Pope Francis. A Pew Research poll found no clear sign of a “Francis effect” on increased Mass attendance or lapsed Catholics returning.

A survey by Foundations and Donors Interested in Catholic Activities (FADICA) reported an increase in Catholic giving credited to Pope Francis.

The Compass did not commission professional pollsters to gauge a Francis effect. Instead, it relied on the cartoon mastery of Joe Heller. 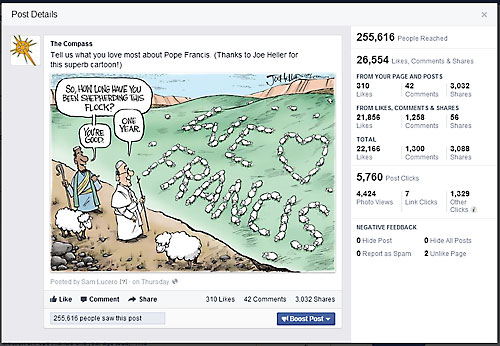 Heller created an editorial cartoon for the pope’s first anniversary. It depicted Pope Francis as a shepherd tending to sheep in the field. A fellow shepherd asks, “So, how long have you been shepherding this flock?” The pope responds, “One year.” Looking out at the sheep, which have formed a “We (heart) Francis” sign, the shepherd says, “You’re good.”

The cartoon was posted to The Compass Facebook page on Thursday afternoon, March 13. Soon followers began sharing comments, likes and posting it on their own pages. By Monday, March 17, the cartoon had reached more than 255,800 people and was shared by 3,033 people.

By contrast, the second most popular post on our site last week (a Pope Francis message from his Twitter page) reached 367 people.

“Over the course of this post’s first four to five days, 22,000 individuals liked it and 3,000 shared this cartoon on their own wall with their friends,” he said in an email. “The Compass’ Facebook page reached over a quarter million individuals with one post. Just think about that — this is two and a half times the population of the City of Green Bay! It’s just another sign that the relevance and benevolence of Pope Francis’ loving Gospel witness just keeps growing and growing.”

When the cartoon was posted, Facebook viewers were asked what they loved most about Pope Francis. The comments were overwhelmingly positive, many mentioning the pope’s humility, love and compassion. John Heagney wrote: “I have been a lapsed Catholic for more than 50 years. Popes come, popes go and nothing changes. Until now. This man is a walking, humble miracle.”

It’s not scientific, but The Compass Facebook page gives the impression that, yes, there is a Francis effect.

One last note: The second most popular Facebook entry ever posted by The Compass reached 41,520 people. What was the post? Another Joe Heller cartoon on Pope Francis. That cartoon, marking Catholic Press Month last February, depicted the pope driving his Renault and holding a copy of The Compass.