DE PERE — Joe Lombardi never knew his grandfather, Vince Lombardi, but he shares the same credo as the legendary coach of the Green Bay Packers.

Faith, family and football, in that order are priorities in life for Lombardi, the new offensive coordinator for the Detroit Lions. 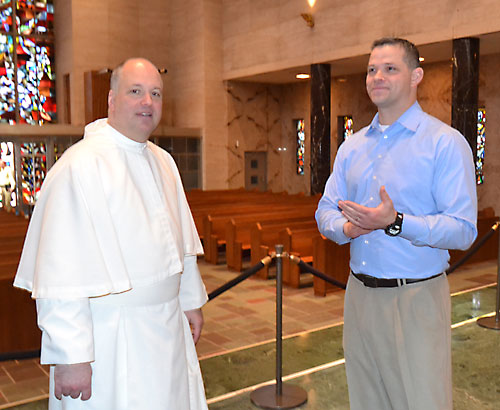 Joe Lombardi, grandson of the legendary coach of the Green Bay Packers Vince Lombardi, is pictured with Norbertine Fr. James Baraniak in the church at St. Norbert Abbey March 29. Fr. Baraniak invited Lombardi to speak at the abbey’s “Day for Men.” (Jeff Kurowski | The Compass)

“This job can be very consuming,” he said. “Some may say that I have my priorities reversed at times, but I try. Those are the three things in my life. I don’t have any hobbies. I don’t golf, hunt or fish.”

Lombardi, who was born in 1971, the year after his grandfather died, delivered the keynote address at  “A Day for Men,” March 29, at St. Norbert Abbey. He said that he isn’t most comfortable talking about his faith, but feels it’s his duty to accept such invitations when his schedule allows.

“I feel like if somebody asks me, I have a responsibility to do it,” he said in an interview with The Compass. “I kind of have these old Catholic sensibilities where I like to go into a quiet church, sit in the corner and say my prayers. It’s not something that comes natural to me to stand up there and talk about religion, but it’s something I feel deeply about, and if that opportunity is given to me, I have a responsibility to go ahead and do it.”

He also spoke about the need to be mentally tough both as a football player and as a Catholic. A quarterback cannot “let a bad play turn into a bad game and a bad game turn into a bad season,” he said. We need to display mental toughness in remaining faithful, he added.

“Like most coaches, I tend to be a perfectionist,” he said. “I start the day with morning prayer. I pray the rosary in the car on the way to work. I do evening prayer. It’s tough sometimes because life is busy. It’s important to understand that we are not going to be perfect, but we need to bounce back. If you get away from your prayer life, bounce back.”

Other connections between football and faith addressed by Lombardi included being committed at all times, being coachable or in faith terms, “being on board with the teachings of the Catholic Church,” being consistent and showing leadership.

Lombardi began his coaching career at the University of Dayton in 1996. His first NFL coaching position was as an assistant with the Atlanta Falcons in 2006. He was on staff with the New Orleans Saints from 2007 to 2013, including the last four years as quarterbacks coach. Becoming a head coach in the NFL is not a current goal.

“I concentrate on doing the job I have the best I can,” he said. “I knew that I wanted to be a coordinator. I had a good job in New Orleans working for Sean Payton and being Drew Brees’ coach. It was a good gig. I feel that we can have the workings of something similar in Detroit. Head coaches have to do a lot of things that I didn’t get into coaching to do.”

Does his faith help in his profession?

“I’ve never had a good answer,” said Lombardi. “When you are living your life in accordance to your faith, there is a smoothing out that happens. Your problems don’t go away, but that turbulence goes away a little bit. You are able to handle it. I think that football helps me to be a better Catholic. The characteristics you look for in players and coaches can apply to my faith.”

Lombardi and his wife, Molly, have six children, three sons and three daughters, ranging in age from 2 to 12. Going home to his family after a tough loss has provided more comfort in the past, he said.

“My oldest kids are old enough to be in the tank with me when we lose,” said Lombardi with a laugh. “It’s nice. You can get away and immerse yourself in family. My faith and family life serve as an anchor and help in not getting too worked up about the things in everyday life.”

Crucifixes, statues of Mary and a painting of The Last Supper are found in the Lombardi home as part of instilling faith in the children. Lombardi shared a humorous story about naming one of his sons. He and Molly asked the older children for suggestions. Two of his daughters offered names more suitable for a dog, so he directed them to think of the names of saints.

“My son, who was 7 at the time, said ‘Like Reggie Bush’ (a New Orleans Saint at the time). There is discouragement along the way, but we try to give our kids good food to grow in faith,” said Lombardi.

Norbertine Fr. Jim Baraniak, prior at St. Norbert Abbey and chaplain for the Green Bay Packers, met Lombardi eight years ago at the NFL Combine in Indianapolis.

“We wanted to expand this event. There were other names, coaches and athletes, Hollywood names from my work with Major League Baseball, but the name recognition and the Lombardi heritage was the perfect fit and Joe is outstanding.”

Judy Turba, director of the Norbertine Center for Spirituality, said that the event filled up quickly. There have been discussions to move “A Day for Men” to a bigger venue, such as St. Norbert College, but it will remain at the abbey because of the sacredness of the space.

“I was just able to hear one speaker, Chris, and he was great,” said Lombardi. “You not only learn something from conferences like these, but get a lot of energy. You leave here motivated and refreshed. Your batteries are charged up to go out and live your life the way you are supposed to.”