‘Novena to Queen of Heaven’ is latest shrine booklet from Looney

GREEN BAY — “O Lady of Good Help, today I bring to you the families of the world. … The family is under attack … please pray for the sanctification of families.” 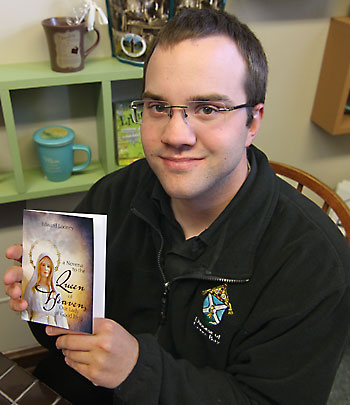 Will the phrases from a newly-authored, nine-day novena to Our Lady, Queen of Heaven, attract the attention of the Vicar of Christ?

Novena author Edward Looney hopes and prays so, generating such confidence that Looney plans to send a copy of his 25-page booklet, “A Novena to the Queen of Heaven, Our Lady of Good Help,” to the Vatican for papal review.

Looney, who will be ordained a transitional deacon of the Green Bay Diocese on May 31, said he hopes his small, but powerful novena catches the eye of Pope Francis as the pontiff plans a visit to the United States in 2015 for the World Meeting of Families in Philadelphia.

“I think it (papal visit) is conceivable,” Looney said, noting Green Bay Mayor Jim Schmitt has extended an invitation to Pope Francis to hold a Mass at Lambeau Field and to make a pilgrimage to the Shrine of Our Lady of Good Help near Champion, where the Virgin Mary appeared to a young girl, Adele Brise, on Oct. 9, 1859.

The shrine has attracted international visitors since 2010, when it became the only church-approved Marian apparition site in the United States.

“I would encourage people to pray the novena for the intention of having the Holy Father come to the shrine. We can only hope he (Pope Francis) comes,” Looney said.

Attracting Pope Francis to the area is a fantasy wish of Looney, who wrote the prayers in the booklet, his fifth religious-oriented work since starting in the seminary.

“I wrote the novena in hopes it will help to raise awareness of the shrine because a lot of people don’t know about the shrine,” Looney said. His inspiration for the booklet came in 2013 when he was praying the Divine Mercy novena from Good Friday to Divine Mercy Sunday.

“I thought it would be really nice for the shrine to have its own daily intention book for a nine-day novena,” Looney said.

A fourth-year theology student at the University of St. Mary of the Lake/Mundelein Seminary in Chicago, Looney has been a devotee of Mary and the shrine since high school.

“I heard there was talk of having a novena for the shrine, but nothing came of it, so I proposed writing a novena and they (shrine officials) accepted my proposal,” Looney said.

He said the novena can be used in different ways such as praying nine days before or after the Oct. 9 anniversary of the apparition sighting; before making a pilgrimage to the shrine; or for graces received at the shrine.

Looney said the novena booklet brings together two other prayers written for the shrine: one for Adele Brise, praying her soul would be with God, and the other, by Green Bay Bishop David Ricken, praying for the intersession of Mary, specifically at the Shrine of Our Lady of Good Help.

Looney said he wrote the novena prayers “while praying myself, mostly prayer periods at the shrine and from thought I had.”

“I wrote all the prayers initially in the context of journaling and then refined them later,” Looney said.

Looney said the booklet is modeled loosely after the Divine Mercy novena.

“It’s in line with what other people are doing in this genre of devotional books,” Looney said. “Each day has a specific intention which is intimately connected to the history of the shrine and the story of Sr. Adele Brise. The first day, for example, is for the sick, especially those who suffer eye disorders.”

Sr. Adele Brise lost sight in her right eye and was permanently disfigured as a little girl during an accident involving lye.

Looney said the second day’s prayers are for immigrants. Sr. Adele and her family emigrated from Belgium.

Immigration is a top focus for Pope Francis.

Looney said the novena is designed, over time, “to help people understand the apparition at the shrine.”

The booklet, released on March 25, is currently available for sale at the shrine and will soon be on the bookshelves of local retailers, except for one very special copy.

That copy is heading toward the Vatican and, hopefully, the eyes of Pope Francis.