GREEN BAY — Members of the Diamonds in the Rough co-ed slow pitch softball team enjoyed a light moment prior to their June 9 game at Bay Beach Park. The team represents St. John the Evangelist Homeless Shelter, an emergency shelter facility operated by the Diocese of Green Bay and housed in the former gymnasium of the St. John School building next to St. John the Evangelist Church. The team was warming up when Abbie Nies, case manager at the shelter, shared an observation that drew some laughs. 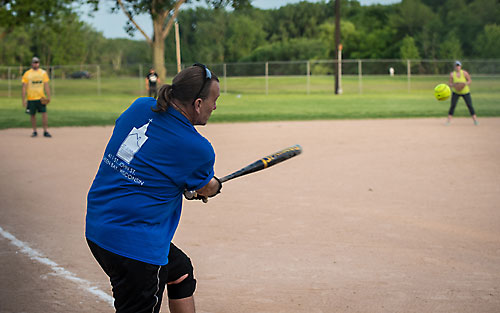 Third baseman Randy Biederman connects on a pitch for Diamonds in the Rough, the St. John The Evangelist Homeless Shelter softball team. (Sam Lucero | The Compass)

Nies, who played the rover position in the team’s 10-player defensive lineup, mentioned that the squad was in its fifth week of the season and had suffered only one defeat. The Diamonds had lost their only game played on May 5 and three others were postponed due to rain.

“Abbie is the eternal optimist,” said Alexia Wood, shelter executive director.
The team fell to 0-2 after a 13-6 defeat, but the success of this group is measured in more than wins and losses. The roster is made up of past guests, staff and volunteers at the shelter. The goal is to bring people together as a means to stay connected and have some fun.

“Most of these (past guests) are in recovery so it is an opportunity to maintain a positive relationship through the summer so they can maintain their sobriety,” said Wood, who played second base.

The shelter is open November through April. During the remaining months, services are offered on Tuesdays. Guests may stop by to retrieve mail, pick up personal care products, take a shower, eat lunch and visit. The softball team serves as another means to build on those relationships when the shelter is not in full operation.

The idea for the team grew out of a dinner conversation at an event where Wood and some past guests spoke about the shelter.

“We suggested it,” said Sherry Smestad, the team’s starting pitcher. “I was thinking, ‘Let’s do something in the summer so we are not just sitting here.’”
Smestad credits the shelter for helping her make positive changes in her life. She was honored with an award for her accomplishments.

“I’m staying sober, I got a job, I got a house,” she said. “Now, I’m going to volunteer there and help them out. It’s my family. Lexi (Wood), Angela (Mihalko, program manager) and Abbie are like my second family. If you get down in a rut all you have to do is pick up the phone and call and they will be there cheering you on and pumping you up.”

League games are scheduled for Monday evenings at parks throughout the city. The environment is positive, especially for team members in recovery, as opposed to a bar volleyball league, for example. For some of the players, stepping on the diamond marks a return to fun days of the past.

“I played. I was a pitcher,” said Smestad. “It’s been a while. It’s been about 15 years.”
“I played when I was a kid,” said Chad Zingler, the team’s shortstop who was a guest at the shelter this past year. “It’s great. Everybody gets involved. It occupies time, keeps people busy.”

Gary Baumann, a St. John’s volunteer, opened the game at catcher and pitched a couple innings. He said that he didn’t know what to expect five or six years ago when he first stepped into the shelter.

“I was invited to serve breakfast,” he said. “I have met so many good people. I have done some maintenance repair work, but mostly I’m just a volunteer. I have the time to give.”
Baumann, an Army veteran from Hobart, said that he likes that the team is focused on having fun.

“The game before us, guys were talking back and forth and were too competitive,” he said. “I’m 71. That’s not for me. I wouldn’t want to be a part of that. I also play on my church team on Sundays. I enjoy it.”

The camaraderie among the players stands out, said Tony Pichler, diocesan director of lay ministry formation, who is a member of the ministry team at the shelter. Pichler was among the founders of the shelter in 2005 and also serves on the board of trustees.

“The neat thing about this team is you can’t tell who are the guests, the staff or the volunteers,” he said. “They are all just teammates.”