After court decision, what next?

For the past three years, the U.S. Conference of Catholic Bishops has sponsored a “Fortnight for Freedom” event. The two-week observance, which includes prayer services, rallies and discussions on the topic of religious freedom, seeks to protect religious liberties from government infringement. 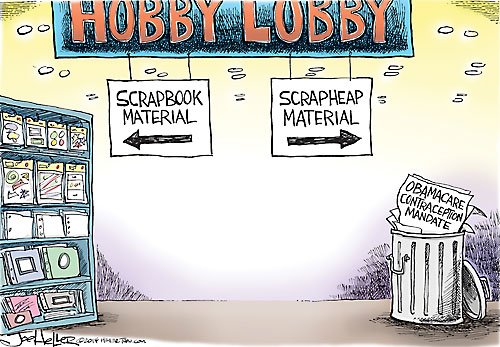 “We want to be able to practice (our faith) unabashedly, whether in church or in the workplace as part of church ministry,” noted Archbishop William E. Lori, who chairs the U.S. bishops’ Ad Hoc Committee for Religious Liberty. “We don’t think we should have to compromise our beliefs in order to observe.”

Fortnight for Freedom began in reaction to a mandate by the U.S. Department of Health and Human Services (HHS) — which oversaw the Obama administration’s Affordable Care Act — that employers, including Catholic charities, hospitals and universities, provide insurance coverage for contraceptives, sterilization and abortion-inducing drugs.

Catholic institutions were not the only ones opposed to the contraception mandate. Businesses owned by families, including Hobby Lobby Stores and Conestoga Woods, objected to the mandate and took their objections to court.

On June 30, the Supreme Court ruled 5-4 in Burwell v. Hobby Lobby Stores, Inc. that “closely held” corporations (those in which five or fewer people control a majority of the shares) may be exempted from the contraceptive mandate.

The court based its ruling on the 1993 Religious Freedom Restoration Act and not on the First Amendment. The RFRA, the ruling stated, “prohibits the federal government from taking any action that substantially burdens the exercise of religion unless that action constitutes the least restrictive means of serving a compelling government interest.”

Left in legal limbo are religious organizations that oppose the contraceptive mandate. Catholic charities, hospitals and universities were not given a religious accommodation that churches received from HHS. These organizations, like the Little Sisters of the Poor and the University of Notre Dame, filed lawsuits seeking exemptions from the contraceptive mandate and are waiting for their cases to be heard.

Even with all of its good intentions, seeking to provide affordable health care to all people, the HHS was misguided in pushing the contraceptive mandate on to people who oppose it.

In an address to Catholic journalists June 20, Helen Alvare, a professor at George Mason University School of Law in Virginia, said that the free contraceptives mentality displayed in the health care debate “is like the abortion debate all over again.” Now the rhetoric has changed to contraceptives being “absolutely necessary for women’s health.”

Women today have many other concerns they feel need government and society’s attention, she said. These include addressing poverty (which affects more women than men), having paid leave to better care for children, earning a living wage and helping with aging parents’ needs, reported Catholic News Service.

Alvare said that the Affordable Care Act’s contraceptive mandate “has sucked the oxygen out of the room” for women, offering few opportunities for these other issues to be discussed.

“The church has so much to offer on women and marriage and family in the marketplace,” added Alvare, who is the force behind a movement called “Women Speak for Themselves.” Learn more about the organization at womenspeakforthemselves.com.