Chapel built in 1875 near St. Nazianz has ties to 14th century statue of Our Lady of Loucim

ALLOUEZ — What do the Fourth of July, St. Nazianz, Bohemia and a sword have to do with each other? They’re all part of the story of Our Lady of Loucim. 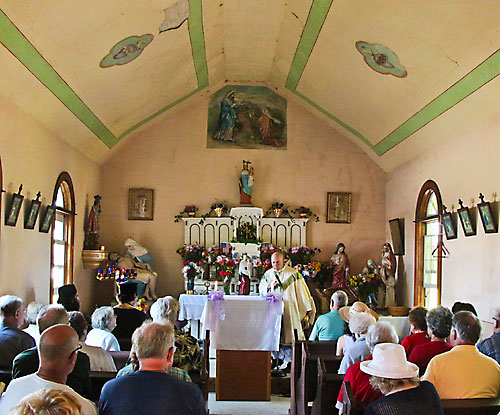 Salvatorian Fr. Patrick Nelson celebrates Mass on the Fourth of July at Lax Chapel, south of St. Nazianz in rural Manitowoc County. On the altar and behind the altar stand two statues of Our Lady of Loucim, the only two known to exist in the United States, according to Lee Thompson of Milwaukee. (Benjamin Wideman | For The Compass)

It was built in 1875 by Frank Lax, who had come to this country from his native Bohemia in 1870 seeking a better life for himself and his family. With him, he brought a small statue of Our Lady of Loucim, an image of Mary dating back to 1400 in Bohemia. About five years later, Frank fell very ill. Remembering the image of Mary from his homeland, he promised to build a chapel for the statue if he got well.

He did and the rest is history. The present chapel — cared for by Frank’s great-grandchildren — was rebuilt in 1910. The chapel began to draw visitors and, since Frank’s day, there has been an annual Mass celebrated there on July 4. (Prior to liturgical changes in the church’s calendar in 1969, the feast of the Visitation was celebrated on July 2.) 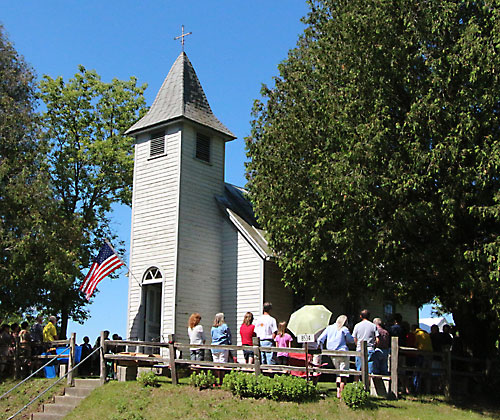 Churchgoers who couldn’t fit inside the Lax Chapel for a Fourth of July Mass stand outside the chapel and listen via a speaker system. About 40 of the roughly 150 people who attended the Mass could fit inside the chapel, which was built by Frank Lax in 1875. (Benjamin Wideman | For The Compass)

This year, the Mass was celebrated by Salvatorian Fr. Patrick Nelson, pastor of St. Gregory Parish in St. Nazianz. More than 100 people attended. One was Jane Schaller, of the St. Nazianz Historical Society, who has been playing the organ for the July 4 event for 30 years. She remembers attending the Mass with her grandparents.

“I think it’s the tradition,” she said, about why the July 4th Mass is so popular. “And then to see the spirituality coming from the Lax family — it’s a wonderful thing.”

The little chapel only holds about 40 people, so the pump organ Schaller plays is brought outside.

“There’s a speaker system (for the choir),” she said. “They open the window and I can see right in.”

After Mass, local families bring food, desserts and drinks to share, much in the manner of a family reunion. Schaller recalled that, “in the old days, they used to bring beer,” but that is no longer allowed.

For many years, the little chapel used to be open for visitors all the time. However, vandals put an end to that. Today, the chapel is open on weekends and for special events like St. Nazianz’ Community Fest in September, according to Jim Lax, the fourth generation to care for the chapel.

“It depends on the weather,” Lax noted. “I try and open by the first of May. It depends upon how soon it gets cold. I’ve had it open as far as Thanksgiving.”

Lax lives nearby, so, if he sees a visitor stop at the chapel, “I jump on my four-wheeler and unlock it. Last week, I had somebody from Grand Rapids, Mich.”

One frequent visitor over the past 25 years has been Lee Thompson of Milwaukee. Thompson, who is 88, grew up in Green Bay and, until reading a newspaper article in the Manitowoc Herald Times Reporter, was unaware of the Lax Chapel. However, he soon learned that he had an important tie.

Thompson owned the only other statue of Our Lady of Loucim known to exist in the United States. He had received his as a teenager from his grandmother. Her statue had come from Bavaria, near its border with Bohemia (Czechoslovakia, where Loucim is located).

“My great-grandmother brought it here in 1895,” Thompson told The Compass. “Grandmother had it on top of a chest of drawers and when we visited them in Manitowoc, I would go and look at it. I said, ‘Grandma that’s all I ever want when you die.’”

He was in high school when his grandmother died and his uncle gave him the statue.

“It was 1941 — I was a freshman in high school. I didn’t pay much attention to it at that time in my life,” Thompson admitted.

But that changed in 1990, when he read that newspaper article. Since then, he and his late wife, Laverne, traveled to see the original statue in Bavaria, and later brought his own statue to the annual July 4th celebration in St. Nazianz.

Story of Our Lady of Loucim

That brings us to the story of Our Lady of Loucim and the Protestant Reformation.

The small village of Loucim had a church honoring Mary as far back as the 14th century. However, by the early 15th century, followers of John Huss, a Catholic priest who became a Reformation founder, began attacking churches. The statue of Mary was taken from its church and hidden in a linden tree for safety.

Not long after, Etibor Krcma — a follower of Huss and a church member — took the statue and tried to destroy it by striking it in the head with a sword. The statue began to bleed. Horrified, Krcma threw the statue — with the sword embedded in it — into a pond. But the statue floated, still bleeding. Krcma fled the pond but, as he passed the tree, he saw the statue standing there again. It was still bleeding. (Krcma later confessed his offense and became the church sacristan.)

That original statue is now housed in a larger church called Neukirche Heiligenblut (“New Church of the Holy Blood.) Lee Thompson visited there and was surprised to find St. Nazianz listed in the church museum. He said that, on a map of pilgrimage sites all over Europe, they “have a line going from there to St. Nazianz.”

Thompson noted how, in Bavaria, he saw many farms that had their own chapels on their farmland — like the Lax Chapel. “When people would travel the country by horse and buggy,” he said, “they would find a place along the road where they could refresh themselves.”

He added that he thinks the Lax Chapel still serves that welcoming purpose today.

In June, Thompson donated his own statue to the St. Nazianz Historical Society. This year, just as he had done for many years, his statue was carried to the Lax Chapel Mass and placed below the altar. Jane Schaller said that the historical society will see to it that the annual tradition continues — hopefully for another 140 years.