CHAMPION — Catholics in the Middle East are being persecuted and slaughtered while the world watches and remains silent, said the leader of an Eastern rite Catholic community. 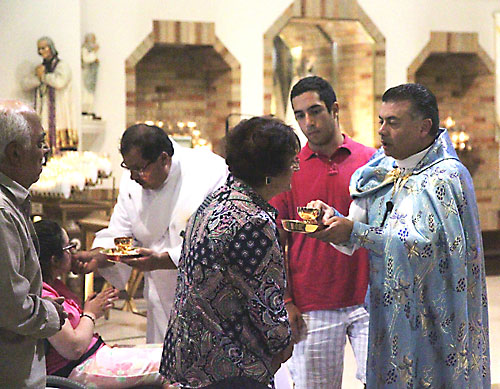 Msgr. Sharbel Maroun, pastor of St. Maron Maronite Parish in Minneapolis, distributes Communion during a liturgy at the Shrine of Our Lady of Good Help in Champion July 2. (Edward Byrne | Special to The Compass)

“It is a very heartbreaking situation, affecting everybody but mainly Christians,” said Msgr. Sharbel Maroun, pastor of St. Maron Maronite Parish in Minneapolis. “The Middle East is an erupting volcano, causing so many people to be wounded, displaced, injured and killed. There is a wave of persecution — I think it is a systematic persecution — that the church hasn’t seen since the early ages.”

He led a group of Maronite Catholics from Minneapolis, Chicago and Milwaukee to the Shrine of Our Lady of Good Help in Champion on July 2.

Rite has roots in Lebanon

The Maronite Rite has its roots — and its patriarchate — in Lebanon. It is the native Catholic Church in much of the Middle East, including Syria and Palestine.

“In Iraq, we see a systematic extermination of Christians,” Msgr. Maroun said. Christians are given four choices by the Islamic fundamentalists: convert to Islam, pay a huge tax to the Islamic governments, leave, or be killed.

“It is devastating that the international community is just watching, doing nothing,” Msgr. Maroun said.

Several weeks ago, Christians were told to get out or be killed, and the international community said nothing and did nothing.

“I am talking about the international community in general, including the super powers,” he said. “By not doing anything, you are as guilty as those who are killing Christians. This is plain English.”

Msgr. Maroun said it is similar to the silence of the world when Jews were persecuted, rounded up and murdered wholesale in Nazi Germany.

“The Christians have been appealing, crying, begging the world to do something about this situation in the Middle East,” Msgr. Maroun said.

The religious leader said there were about 1.5 million Christians in Iraq. Now, about 15,000 remain.

“We are doing nothing today, just as if we are approving what is happening there and we want Christians to be exterminated there,” Msgr. Maroun said.

It isn’t easy for Christians to escape. The Islamic fundamentalists in Syria, for example, confiscate all of the property and possessions of Christians — including wedding bands — and tell them to leave. But they also seize their passports, making it difficult for Christians to even cross the border to safety.

“They are left in open space, hoping for God’s mercy. That’s the only thing saving them now,” he said.

Msgr. Maroun said Christians have lived in Syria and the other Middle East countries for 1,800 years, and they have a right to stay in their homelands without facing persecution.

“Something is happening that I cannot understand myself,” he said.

Many Maronites fled the Middle East in the 1860s when there were similar persecutions. They fled to Europe, North America, South America and Australia — but 22,000 were slaughtered before they could flee.

Msgr. Maroun is asking for help from Christians throughout the U.S. “First people need to pray. They also need to contact their congressmen and senators,” Msgr. Maroun said. “There are 2,000 years of (Christian) history in the Middle East that is being eliminated.”

He said Christians in the Middle East have been reduced to two percent of the population in Arab countries.

“Christians are paying the price with every fight that’s going on,” Msgr. Maroun said. “The Jews, the Sunni and the Shiites are killing each other — but the Christians pay the price.”

He said that Mideast Christians do not live by the sword.

“Christians love freedom, and they don’t know hatred — it is not part of our nature,” he said. “When people are acting ‘an eye for an eye, a tooth for a tooth,’ the Christian cannot act this way.”

The Christian population in Lebanon was 60 percent 30 years ago. Now it is around 35 percent and declining. The losses are even more dramatic in Syria and Iraq.

Msgr. Maroun said he’s told Muslim people in the Middle East that the whole society loses when Christians are eliminated because they are the light in a dark world, the only witnesses to peace.

“The Christians bring peace to the world,” he said. “Without them, there is darkness and death.”

“The bishops have been contacting the White House, Congress, but again it is falling on deaf ears,” he said. “The pope has been crying for help, our patriarch has been calling for help. Why is there silence?”

Maroun said all of the Eastern Rite bishops in the U.S., Catholic and Orthodox, are now calling on the U.S. to act to protect Christians in the Middle East.

Maronite congregations are taking second collections at church to raise money to help Christian refugees fleeing violence in the Middle East and Africa.

Msgr. Maroun would welcome support from all Catholics in the U.S.

“We are giving the Middle East up to terrorists. The Christians have never attacked anybody.”

The Maronite Eparchy (Diocese) of Our Lady of Lebanon has parishes in Illinois and Minnesota. It is in the process of building a parish in the Milwaukee area; a mission in the Appleton-Green Bay area is also in the works.

Msgr. Maroun said there would be a Maronite Divine Liturgy (Mass) scheduled in northeast Wisconsin this fall or next spring to plant the seeds of a Maronite community here.

Many Lebanese Christians emigrated to northeast Wisconsin over the last 10 years and the church hopes to develop a parish here to let them regain their Maronite heritage.