Last month I was asked to write a column for The Catholic Journalist, newspaper for the Catholic Press Association of the United States and Canada (CPA), about Amy Kawula, advertising and marketing manager for The Compass. Amy recently was honored by the CPA in June for her work. I decided to post the column here and share with readers of The Compass. 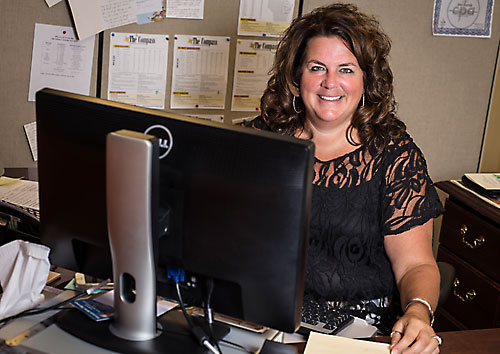 Amy Kawula, advertising and marketing manager for The Compass. (Sam Lucero | The Compass)

This year’s winner of the Catholic Press Association’s Individual Excellence Award for advertising/business/marketing personifies the familiar mantra, “Service with a smile.” In fact, the smiles coming from Amy Kawula, advertising and marketing manager for The Compass, newspaper for the Diocese of Green Bay, are matched only by the kind words she offers – to co-workers, advertisers and subscribers.

Asked to describe Amy’s secret of success at The Compass in one word, her colleagues offered accurate descriptions: enthusiastic, joyful, caring, persistent, non-stop.

Enthusiastic: Whether it’s renewing an advertising contract or finding a new advertiser, Amy’s enthusiasm is contagious. She is sincere when she tells clients that her goal is to provide them with the best service for their advertising dollars. This approach has translated into regularly exceeding sales goals. For example, for the 2012-2013 fiscal year, The Compass reached $307,813 in advertising sales, surpassing the $283,000 goal.

Joyful: With the grind of a weekly deadline, Amy manages to display a joyful spirit. Amy has an amazing rapport with her advertisers. Every year she recognizes her clients by personally delivering a gift box for Christmas. In 2010 she began sponsoring yearly advertiser luncheons for the top 10 advertisers. They are invited to a luncheon at Bishop David Ricken’s residence in Green Bay, where the bishop has an opportunity to personally thank advertisers for their support.

Caring: Amy has served in her current job at The Compass since 2005. However, she’s a familiar face at the diocesan offices, where she began working in 1986. Having worked in several other departments, she has close relationships with other diocesan leaders and does what she can to help promote their programs. For example, Amy helps department directors produce special supplements in The Compass. The costs of these four-page supplements are covered by paid advertisements and extra copies are printed for departments to distribute. Another example of Amy’s care and compassion for others was overseeing the planting of memorial trees and gravestones on the diocesan campus for two longtime department leaders who passed away.

Persistent: Building circulation is a continual challenge for The Compass. Sending the paper to all registered Catholics in the diocese has been a dream, but costs incurred by the diocese and parishes have prevented this plan. Instead, Amy continues to find new ways to provide subscriptions to the print edition.

Last February, she applied for a parish memorial fund grant that would pay for Compass subscriptions to inmates at three prisons. The grant was accepted and 70 inmates began receiving The Compass in July. Amy also works with generous donors who sponsor our “Compass in the Classroom” program, which donates copies of the newspaper to Catholic schools and parishes for classroom use. Last year, 2,424 copies of The Compass were delivered to 111 classrooms.

Non-stop: If pounding the pavement for ads wasn’t enough, Amy continues to build revenue through other sources. She began organizing Compass pilgrimages in 2007. In 2013, The Compass sponsored two pilgrimages: one to France and one to three Marian pilgrimage sites in Wisconsin for the Year of Faith. Both pilgrimages sold out and produced more than $22,800 in revenue.

Those are all accurate descriptions, but I might add one more: Faith-filled. Amy’s faith permeates all that she does — in and out of the office.

Amy has a gift for making advertisers, readers and diocesan employees feel like they have ownership in the success of The Compass. And it all starts with a smile.