‘All I own I Owe’ is Norbertine priest’s first autobiography

ALLOUEZ — Norbertine Fr. Al McBride has written more than 40 books and countless articles. But his latest book is a first: It’s about him. 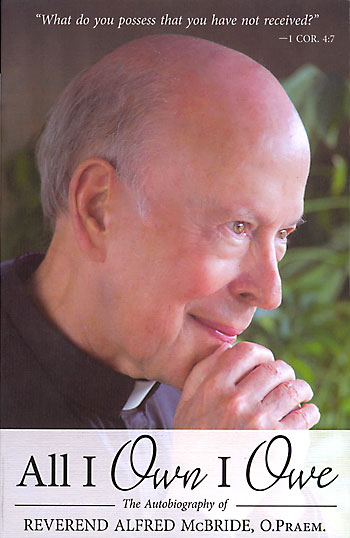 “All I Own I Owe” takes readers on a journey with the 85-year-old priest from his birth and childhood in the Irish community of “Center City” Philadelphia, to his education and early vocation as a seminarian, through the changes of Vatican II and the church’s increased focus on religious education for both children and adults.

He founded the department of religious education at the National Catholic Education Association (NCEA) in 1971. He recalls how with “thousands of sisters and male religious leaving the convents, monasteries and schools, there was an influx of lay teachers and principals needing to learn how to explain the Catholic faith in schools and religious education.” He spent nine years with the NCEA.

The book also explores a number of areas of priestly life — in the well-known homilist/speaker’s easy tone. He moves from his early years at St. Patrick’s Church and School in Philadelphia, to the spelling bee failure that ended a chance at attending a Jesuit-run high school and led instead to the Norbertine high school that would shape his life, to seminary days and early priesthood, followed by the changes of Vatican II. Also explored are the U.S. visit of St. John Paul II in 1987, when the U.S. bishops asked Fr. McBride to serve as spokesperson.

Fr McBride later told The Compass, “Those who recall the visit will always remember the pope’s reaction to the song by Tony Melendez, who was born without arms.”

Readers will also appreciate insights into how priests prepare homilies, a skill Fr. McBride perfected while recording Sunday radio Masses on the then-Norbetine-sponsored radio station: WBAY. Fr. McBride writes, “I believed that finding an appropriate story to start the homily was important to gaining the attention of the congregations.”

Further tricks, he reveals, are to keep a homily to ten-minutes, make eye contact, keep to the central point and, usually, memorize the last sentence to make certain to end on that central point.

The training served him well. In the book’s chapter, “How I Became a Published Author,” he tells how he tried to pitch a book on catechetical work based on his lectures to seminarians as novice master for the Norbertine community. The publishing firm turned him down, but, as he was leaving the offices, a staff member asked “Father, do you have any homilies for the new liturgy?”

That led to “Homilies for the New Liturgy,” his first book. It would sell 15,000 copies.

After 61 years of priesthood, Fr. McBride is able to both look back over many changes in the church and forward to the future. The secret, he said in reflecting on his 60th jubilee in 2013, is love: “I was attracted to the teaching of Jesus that I should not just love him, but accept the love he offers me. … The people who gathered round me at my jubilee came with the affection of years. … That is the beauty of the Christian contract. Such love is free and never taxed.”