No freedom in choosing death

Few stories elicit emotional reaction like those involving people battling cancer, particularly when they are young adults in the prime of their lives. After learning of the death Nov. 1 of 29-year-old Brittany Maynard, the sorrow was doubly compounded. 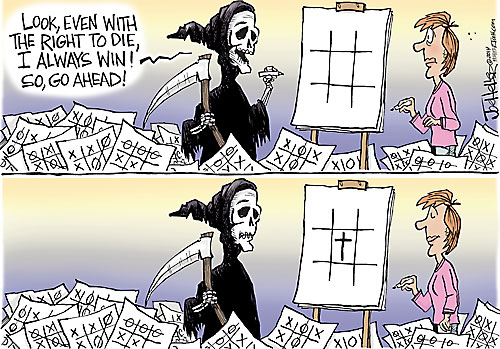 Maynard suffered from an aggressive form of brain cancer and chose to end her life rather than continue treatment. Maynard’s story became an international drama after her battle with stage 4 glioblastoma was featured in People magazine in October. She moved from California to Portland, Ore., to take advantage of the state’s assisted suicide law.

“My glioblastoma is going to kill me and that’s out of my control,” she told People. “I’ve discussed with many experts how I would die from it and it’s a terrible, terrible way to die. So being able to choose to go with dignity is less terrifying.”

Dying with dignity is the mantra we hear today from individuals and organizations promoting assisted suicide and euthanasia. They say controlling the hour of one’s death through painless medication provides dignity in death. Five states — Montana, New Mexico, Oregon, Vermont and Washington — have bought into this falsehood and now allow physician-assisted suicide.

Public opinion also grows in favor of assisted suicide. A 2013 poll by the Pew Research Center’s Religion and Public Life Project found that 62 percent of Americans believe individuals have a moral right to end their own lives, up from 55 percent in 1990.

Ending life prematurely is contrary to Catholic teaching. The U.S. Catholic Catechism for Adults states that the acceptance of assisted suicide stems from moral confusion. “Too many people fail to distinguish between good and evil when dealing with the value of human life,” it states.

The confusion, according to Portland Archbishop Alexander K. Sample, arises when people believe they can control death.

Assisted suicide “suggests that there is freedom in being able to choose death, but it fails to recognize the contradiction,” he said in a statement released before Maynard’s death. “Killing oneself eliminates the freedom enjoyed in earthly life. True autonomy and true freedom come only when we accept death as a force beyond our control.”

Rather than condemn Maynard, we must pray for her soul.

We also need to change attitudes about controlling death.

One way is sharing stories of how people of faith face terminal illness. We have worthy examples.

Lauren Hill, 19, a freshman at Mount St. Joseph University in Cincinnati, also suffers from brain cancer. It was diagnosed last year, shortly after committing to play basketball at Mount St. Joseph. Her tumor is about the size of a lemon and she isn’t expected to live to see 2015.

Rather than give up, Hill turned to her faith. She made it her mission — a dying wish — to raise awareness and funds for cancer research.

“I told (God) I’d take every opportunity to speak for the kids who can’t speak,” she said.

On Nov. 2, Hill took a big step by playing in her first collegiate game at the Cintas Center in Cincinnati in front of some 10,000 people. Her courageous battle was highlighted on TV news and sports programs.

Like Maynard, Hill says one of her fears in dying is feeling pain. But she adds, “The pain that everybody else will (feel)” will be the worst pain.

Fear of death is a human instinct, but faith in the resurrection promised by Jesus Christ, can transform fear into hope. Brittany Maynard understood that death from cancer was out of her control. So does Lauren Hill. Brittany chose to “beat” cancer by ending her life. Lauren chose life in order to beat cancer. That is the true example of dignity.