NEW HOLSTEIN — For more than 50 years, Salvatorian Br. Regis Fust has run the Salvatorian Mission Warehouse in New Holstein. He began helping missionaries in 1963, when his sister, a nurse working in a U.S. hospital, asked where they could donate excess medical supplies. Br. Regis contacted a Salvatorian missionary, who arranged for shipment to a missionary hospital. 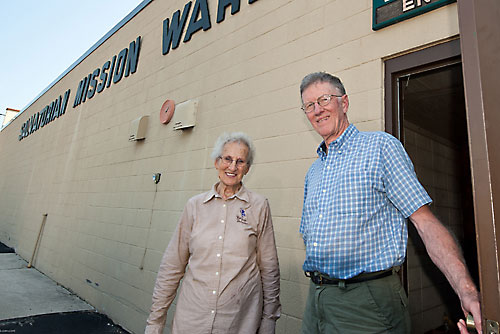 Sr. Dora Zapf and Br. Regis Fust are pictured at the entrance of the Salvatorian Mission Warehouse in New Holstein. For five decades Br. Regis has overseen a volunteer operation that collects and distributes food, clothes, medical supplies and other items to mission outposts around the world. (Sam Lucero | The Compass)

On Feb. 7, the community of Salvatorians and hundreds of volunteers will celebrate Br. Regis’ retirement with an 11 a.m. Mass at Holy Rosary Church in New Holstein. A private reception will follow.

Br. Regis, 82, will continue to serve at the warehouse for a time, according to the new director, Dave Holton. Holton, who has been the associate director of vocations for the Salvatorians in Milwaukee, will officially take over as director on Feb. 1.

“Br. Regis will be staying on as a mentor,” said Holton, who has been at the warehouse for three months.

During his five years in vocations work, Holton would bring Salvatorian candidates to the warehouse to explain the hands-on ministry. He found himself learning as well.

“When I came here, I was totally humbled,” he said of the work at the mission. “Br. Regis has changed the world.”

Br. Regis’ ministry in New Holstein developed gradually, first with small humanitarian shipments to various Salvatorian missions in Tanzania. By 1966, he was able to devote himself fulltime to this ministry. With the help of Salvatorian Sr. Dora Zapf, donor suppliers and hundreds of volunteers who have processed and shipped millions of pounds of food, clothing, medication and supplies to impoverished countries over the years, the warehouse’s mission has grown to encompass over 100 missions in 25 countries.

Part of the key to the warehouse’s success over the years has been the cadre of hundreds of volunteers — some in the second generation — who come from parishes around the diocese each week to repack donated supplies for shipment. What makes the warehouse different from other relief agencies is the personal relationships it has developed with each mission it assists.

Sr. Dora, who was a missionary in Tanzania before joining the warehouse’s volunteer staff more than 40 year ago, told The Compass in 2003 that items are packed “special for each mission. It’s personalized. We ship according to need, not according to what we have in the warehouse.”

Sr. Dora, 79, will stay on at the warehouse, which was built in 1975 and is located on New Holstein’s outskirts.

The Salvatorians plan for the warehouse to continue as it has for the past half-century and Holton hopes that he will be able to grow the mission.

While Holton wants to make sure the information about the Feb. 7 Mass gets out, he realizes that “a lot people would have wanted to come” who won’t be able to. He encourages them to send donations for the warehouse in honor of Br. Regis, or “just stop in here, we’re open.”