Before founding Missionaries of the Word, she was member of Blessed Mother Teresa’s order

Editor’s note: During the Year for Consecrated Life, The Compass is profiling members of religious communities.

BAILEYS HARBOR — Mother Mary Catherine is on the cusp of an adventure — a good place to be, she says, because it means resting totally in God’s hands.

For her, it’s a familiar situation. Although she and two novices are now part of a fledgling religious order, the Missionaries of the Word, Mother Mary Catherine was once a member of Blessed Mother Teresa’s Missionaries of Charity. Mother Mary Catherine and her new diocesan order, the Missionaries of the Word, live a life of simplicity and total abandonment to God as they prepare young people on their spiritual journey. They are based on the grounds of the St. Joseph Formation Center, home of Catholic Youth Expeditions, in Baileys Harbor. (Monica Sawyn | For The Compass)

After 10 years of formation, during which time she worked closely and personally with the saintly missionary, she was refused admission to final vows because of health issues.

The order’s decision, coming a month after the death of Blessed Teresa, stunned the former Peggy Duemling.

“I had always had asthma, but it was never mentioned as a problem until then,” she said.

In 1998 she packed her bags, came home to Wisconsin, went back to school, and although she was a little confused, she was content to wait and see what God had in mind.

“Whenever I don’t understand something, I know it’s God. He always has a plan,” she said.

Through a circuitous route, that plan led her to Green Bay and Bishop David Ricken, who established the new order on May 1, 2014. They are housed on the grounds of St. Joseph’s Formation Center in Baileys Harbor, home of Catholic Youth Expeditions, and their mission is to the youth and young adults of the diocese in the spirit of the “new evangelization.”

However, she knows that could change, depending on where Bishop Ricken might decide they are needed.

“My obedience is to Bishop Ricken,” she said. “I love and respect him and praise God he is leading us forward in many respects. It’s hard to articulate, but I would always follow his lead.” 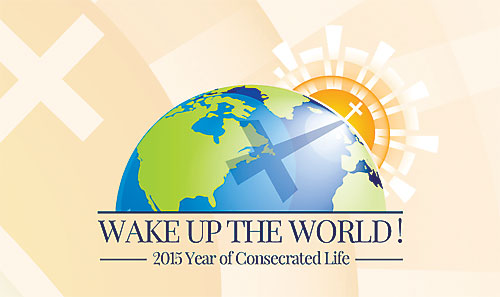 Third in a year-long series on men and women religious.

The consecrated life means loving God above all things and, for her, total abandonment to whatever is his will. There was a time during her 10 years with the Missionaries of Charity when she was dealing with homesickness and with the overwhelming desire to just be a wife and “have 10 children.” Letters from family and friends all seemed to contain photos of children and news about pregnancies.

It was during a time of prayer, when she asked God to speak to her heart, that she realized nothing, even a family of her own, was better than giving herself totally to God. She said it was necessary for her to go through that experience and take that step.

“Any healthy religious should want those things,” she said. “She just needs to want God more, and to know exactly what it is she is giving him. For me, (during those days of doubt) he was showing me my choices, and asking me whether I loved him ‘more than these.’”

At that point, she had no idea that her commitment to God would mean leaving one order and helping to form another one. Now, her face lights up with joy when she talks about this new order whose goal is to walk in discipleship with young people.

“Our charism, which was approved, is an unreserved response to the love of God in discipling our youth and saving souls through prayer, proclamation of the Gospel, and the ministry of presence — being with them on the journey, like Our Lord was with the disciples on their walk to Emmaus.”

She said it’s a different type of ministry than she had experienced in the Missionaries of Charity, where she worked in prisons, in orphanages, in soup kitchens — and then came away.

“But discipleship is a slow flower that blooms in the church because life unfolds so slowly, she said.” She still “walks with” young people who may have been on summer staff five or six years ago, and who still contact her to share faith and ask questions.

“I love it, because in a lot of ways it can be so hidden, like hidden love. This ministry is just so beautiful.”

Mother Catherine took final vows on May 1, 2014, the same day the order was formally established. The two novices with her, Sr. Lucia and Sr. Bernadette, are nearly halfway through their three-and-a-half year novice period.

“You begin by discerning your vocation, but then you must build your relationship with Jesus, and that takes time,” she said.

When asked about a vision for the new order, Mother Catherine said it’s two-fold. There is the missionary internship program, where young adults spend nine months living on the grounds, joining in the sisters prayer life (daily Mass, daily Holy Hour, Liturgy of the Hours prayed five times a day, examination of conscience, the rosary and one hour of Lectio Divina each day) and being part of apostolic outreach as well as working with the Catholic Youth Expeditions headed by Fr. Quinn Mann.

She would also like to see the order help bring Lectio Divina to the parishes in the diocese, leading others to a deeper knowledge and love of Jesus Christ through the Scripture. This would be in keeping with Bishop Ricken’s focus on prayer during the first two years of the six-year Disciples on the Way program he just began.

Mother Mary Catherine said that formation in discipleship, which is so important to her order, means walking with people in all stages of life, but it’s why they need to work so closely with priests. “A lot of people can open up to a sister in a different way than they might to a priest at first,” she said. “We lead them to the sacraments, and the priests can do the rest.”

Mother Mary Catherine doesn’t actively try to “grow the order,” content instead to leave that in God’s hands. She does, however, pray every Friday for vocations. She said there are 15-20 young women discerning a vocation with the Missionaries of the Word, but it’s likely that only a handful will prove to have a true vocation.

That’s because interest in the order often comes from young women who have worked with the sisters in the youth expeditions, where they find unconditional love and acceptance.

“It’s normal in the culture we’re in that young women want to go where they can be loved,” she said. “Love draws us like a magnet, but that’s not a vocation. A vocation has to be a response. It’s a seeking not for myself, but a response to something that was started by God, and you’re responding to that, and you want to give love. You don’t care what’s in it for you, you just want to love God.”