Priest has recipe for satisfying the hungry heart

[vc_row][vc_column][vc_column_text]APPLETON — People today are hungry for the Gospel message and Fr. Leo Patalinghug, a chef who is known as the Cooking Priest, is more than willing to dish it up for them.

Through the initiative of the CIA Faith Mission Operatives, Fox Cities residents had the opportunity of meeting Fr. Leo in person and indulging in not only his delectable dishes but also his message of the new evangelization.

On Saturday, Jan. 31, he presided at a “Grace Before Meals Super Bowl Tailgate” at St. Pius X Church and whipped up his famous Fusion Fajitas. Monday through Wednesday he gave presentations at St. Francis Xavier Middle School on “Finding God Through the Communion of Saints,: “Finding God Through His Mother,” and “Finding God at the Lord’s Table.”

Fr. Leo, 44, a member of a secular institute of priests known as Voluntas Dei, developed his love for cooking as a seminarian at the North American College in Rome. When he was ordained in 1999, he never expected to be an itinerant preacher, reaching people’s souls through their stomachs.

The thought of using his culinary skills as a way of evangelizing first came about in 2001. “That really wasn’t my idea. It was actually the idea of a few priests that I traveled with, in response to 9/11,” said Fr. Leo. “We were all talking at dinner, which I cooked, and they said it really would be helpful if we had a simple thing to get families to come together. I had no idea it was going to turn into a TV show.”

In 2003, Fr. Leo started a blog called Grace Before Meals (gracebeforemeals.com), which has since become a movement to bring families back to the dinner table. It is here, he said, that they can share meals together, communicate, love one another and be nourished — body, mind and soul.

“The simple act of creating and sharing a meal can strengthen all kinds of relationships,” explained Fr. Leo. “Our mission is to give families the tools they need to come together at dinner time — delicious and easy-to-make recipes, ideas for talking together, and prayers to bring God to the table.”

Fr. Leo’s first book, “Grace Before Meals: Recipes and Inspiration for Family Meals and Family Life,” was published in 2007. “A lot of journalists thought it was a unique concept,” Fr. Leo noted. “I didn’t think it was a huge idea at all. Priests like to cook, we like to eat, and we have a responsibility to help families. Because of the press, there were a lot of TV spots and the Food Network got in touch.”

Contact with the Food Network in 2009 led to his participation in “Throw Down!”

with Bobby Flay. The priest defeated the world-famous chef in a cooking competition and it turned out to be the most popular episode of that show. The night it originally aired, Fr. Leo’s website almost crashed because it got 2 million hits.

The year after his appearance on Bobby Flay’s show, Fr. Leo got his own television show, “Savoring Our Faith,” which is on EWTN. He is also the co-host of the radio show “Entertaining Truth” on Sirius XM Radio. He’s had two more books published — “Spicing up Married Life: Satisfying Couples’ Hunger for True Love” and “Epic Food Fight: A Bite-Sized History of Salvation.”

Currently, Fr. Leo is establishing a non-profit organization called The Table Foundation. “It’s a charitable component to Grace Before Meals, where we can do more with people’s generosity,” he said. “It’s got three principals — body, mind and soul.”

He said body is “really reaching to feed people who are hungry and needy, including an energy bar, which is going to be delicious but you buy one and you give one to the homeless.”

“Another idea is working with nursing homes and Alzheimer units to get the chefs to realize, even though people are dying, we want to give them a meaningful last supper,” he continued, “not just for them but for their families. We even want to start a restaurant group to help people that are poor, give them proper training, give them a job so that some of the proceeds go back to charitable organizations.”

The Gospel says go out into the world and share the good news and this is what Fr. Leo is trying to do. “What I’m finding is we are the only apostolate in the church that is trying to affect the secular society. There’s a whole group of people out there that don’t go to church at all or who are barely going. They’re asking questions and they’re afraid to enter into the church structure. That’s where I think Grace Before Meals can be helpful. I started to develop this concept and realized, ‘this is the Gospel.’”

The presentations that Fr. Leo offers appeal to everyone regardless of where they are on their faith journey.

“They see this priest that cooks. He’s a break dancer, he’s a performing artist, he beat Bobby Flay,” said Fr. Leo. “That’s kind of the hook, but while they’re there, they are going to have fun — but they’re also going to be engaged in the faith in what I would call the level that is appropriate to their catechetical understanding. There’s some people who don’t know anything and we have to reach them at a very basic level which is to engage all their senses.”

Fr. Leo has been rated one of the best speakers on the new evangelization.

“I don’t really pay attention to things. I’m just grateful that people are ‘hungry’ for this message,” he said. “Hopefully the message is satisfying because there’s a cooking component to it.

“Food is so intimately involved in the salvation message. The only thing that feeds the heart is the stomach, that’s why Jesus became food — because he knows what we’re hungry for. My purpose is to get everyone to celebrate their mission with God to feed hungry hearts, minds and souls,” he added.[/vc_column_text][/vc_column][/vc_row][vc_row][vc_column width=”1/1″][vc_message color=”alert-info” style=”rounded”]Priest teams up with CRS Rice Bowl for simple Lenten recipes

Fr. Leo Patalinghug is teaming up with CRS Rice Bowl to help Catholics prepare simple, meatless meals during Lent. The recipes are intended to help families eat in solidarity with people around the world. 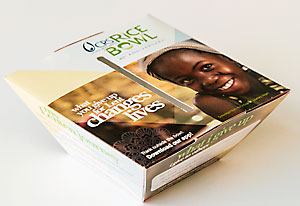 Week 5: Fried Plantains and Beans, Democratic Republic of the Congo.

On its website, crsricebowl.org/recipe, Catholic Relief Services features cooking videos for each recipe hosted by Fr. Leo. In addition, each recipe is posted online.

This is the 40th year that Catholic Relief Services has offered its Rice Bowl campaign. It was originally created to help U.S. Catholics respond to famine in Africa through Lenten prayers, fasting and almsgiving.

The campaign’s focus was a small cardboard box in which families could place donations and send them to Catholic Relief Services at the end of Lent. In 40 years, $250 million has been given through CRS Rice Bowl to support programs that prevent hunger and poverty around the world.[/vc_message][/vc_column][/vc_row]