Editor’s note: This is the first in a three-part series on the role of religious sisters in health care.

ANTIGO — The role of religious orders in health care is entwined throughout history, but that is being refined due to changing demographics. 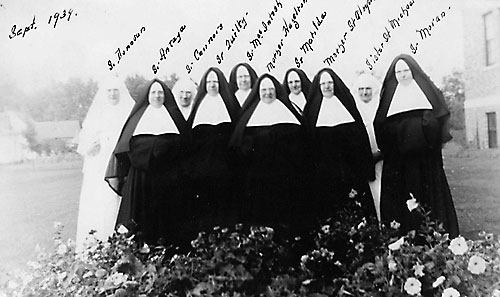 With traditions dating to Europe’s Middle Ages, religious orders established the first U.S. hospital in 1734 in New Orleans; brought the first medical services to the Civil War battlefields; and had surged into the Green Bay Diocese by the late 1800s and early 1900s.

Those orders include the Franciscan Sisters of Christian Charity, which operates Holy Family Memorial in Manitowoc; and Sisters of the Sorrowful Mothers in Oshkosh, which, as Ministry Medical Group administers Door County Memorial Hospital in Sturgeon Bay and, under its Affinity Health Systems banner, Mercy Medical Center in Oshkosh, St. Elizabeth Hospital in Appleton and Calumet Medical Center in Chilton. Affinity and Ministry are both part of Ascension, the nation’s largest Catholic non-profit health system.

In addition, The Hospital Sisters of St. Francis, based in Springfield, Ill., are the owners of St. Vincent and St. Mary hospitals in Green Bay and St. Clare Memorial Hospital in Oconto Falls; and the Religious Hospitallers of St. Joseph operate Langlade Hospital in Antigo.

Antigo had long been home to a series of small hospitals, located for the most part in modified residences, but as the community grew in the early part of the 20th century there were calls for a modern facility. A successful fund-raising effort financed construction of a building, but the Great Depression brought the ability to raise needed cash to an abrupt halt. The structure was left vacant, with an outstanding debt of $18,000 and no money to complete or furnish it.

Local businessman J.C. Lewis contacted the Religious Hospitallers, who operated Community Hospital in New London, to see if it had an interest in taking over the project in Antigo. In 1931, Mother Murdock, that facility’s administrator and superior, came for a visit. Her first gesture upon arriving at the vacant building was to bury a small statue of St. Joseph.

“If St. Joseph wants the sisters here, he will arrange everything,” she said.

But local businessmen were lukewarm to the idea — with one suggesting that he would withdraw financial support if administration was given over to Catholic sisters — and the situation remained in limbo.

One man’s bad luck became a community’s good fortune when Thomas Durfee, an official with the Chicago and Northwestern Railroad based in Antigo, was admitted to the New London hospital after breaking his hip in a fall on an icy railroad platform. During his 11-week stay, he received many influential visitors from Antigo, who were impressed with the hospital and the sisters who operated it.

Lobbying was renewed, this time successfully, and on Dec. 5, 1932, the debt and operation of the hospital were assumed by the Religious Hospitallers. The arrival of Srs. Ann MacIntosh and Malvina Martin sealed the deal. They carried $20 in cash secured from Mother Murdock’s small savings.

“It took a religious order to open the doors of this facility and that has always been the history of the sisters,” Langlade Hospital administrator Dave Schneider said. “They have carried on with great faith and courage over the years. They were driven by faith and they were relentless.”

There were more hurdles caused by the Depression, including local bank closures, which forced the community to appeal to Bishop Paul Rhode of the Green Bay Diocese.

“Tell the sisters to go ahead and open the hospital, it will never close,” the bishop said.

With the diocese’s help, needed funds were finally secured and on March 22, 1933, the hospital was dedicated.

The sisters, educated and well-versed in all aspects of health care, brought with them a high level of expertise and professionalism. At one time, there were as many as 12 Religious Hospitallers serving the hospital.

The sisters did whatever was needed. For example, Sr. Gladys Rideout received her certification in medical technology in order to establish a medical records department and Sr. Clarissa Donovan studied radiology and anesthesia to fill voids in those areas.

Changes began in the 1970s, both in the lifestyles of the sisters and religious orders in general. Sr. Bernice Hughes was the last nun to serve as hospital administrator, with Kevin Keighron, appointed as the first lay administrator in 1976. Now, all the executive positions are filled by laity working within a framework of firm Catholic convictions as articulated by the sisters.

“We believe that Christ walks, works and ministers among all of us,” Sr. Dolores Demulling said. “If we believe this, then our presence will continue to be felt and lived out in our healing ministry.”

That belief is echoed by sisters throughout the diocese, including in organizations such as Ascension Health Care, which now encompasses the Ministry hospitals established by the Sisters of the Sorrowful Mothers.

“I remember the times we worked in it, we were the supervisors, we were the managers, we were the board and we were the sponsors,” said Daughters of Charity Sr. Bernice Corcil, senior executive advisor to the president/CEO of Ascension based in St. Louis, Mo. “That’s long gone. Now we have people who are not (consecrated) religious, who are sponsors. That’s a call to them to take up where we left off. Hopefully we can help direct them for the future.”

Next issue: Vanishing sisters: The future of Catholic health care.