NEENAH — On June 21, Pope Francis will travel to Turin, Italy, to venerate the Shroud of Turin. This 14-foot-long linen cloth is traditionally regarded to be the burial cloth of Jesus Christ. Fox Valley residents were privileged to have their own “shroud encounter” Feb. 28 and March 1 at St. Mary Central High School. 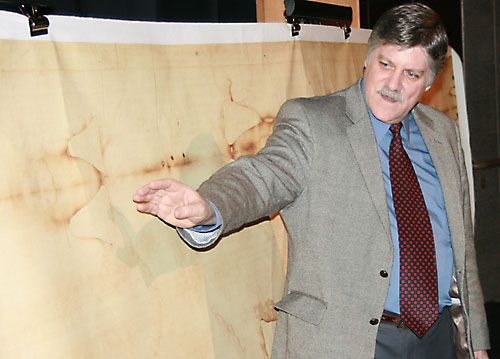 International Shroud of Turin expert Russ Breault uses a life-size replica of the shroud during a presentation Feb. 28 at St. Mary Central High School in Neenah. (Amanda Lauer | For The Compass)

International Shroud of Turin expert Russ Breault presented his research on the shroud and had a life-size replica of the shroud on hand for people to examine up close. The event was sponsored by the CIA Faith Mission Operatives, part of the Window for Jesus Fund, which is an endowment within the Community Foundation for the Fox Valley Region.

Breault, who lives in Atlanta, first developed an interest in the Shroud of Turin when he was in college. “In June of 1980 National Geographic came out with a big article about it,” he said. “I was intrigued and as a writer for the college newspaper. I asked if I could write an article about it myself.” He spent several months reading about the shroud.

“By the time my article appeared in the fall of 1980, I was hooked,” Breault explained. “I thought, ‘Man, this is seriously a cool mystery and nobody knows anything about it.’ To me the whole romance of the shroud has to do with its potential. Could this thing be the most important artifact on the planet or is this the greatest hoax ever perpetrated? It just evolved into a life’s work and mission.”

The first presentation Breault ever did on this topic was to an eighth-grade boys’ Sunday school class using 12 slides from the Holy Shroud Guild. “Just seeing the expressions in their eyes as the crucifixion and resurrection came to life on the wall, this is when I said, ‘This is what I’ve got to do,’” recalled Breault.

In October 1981, Breault had the opportunity to attend the first scientific symposium on the shroud, which was presented by the Shroud of Turin Research Project (STRUP), a group of 24 scientists. STRUP’s conclusion on the shroud was, “The shroud image is that of a real human form of a scourged, crucified man. It is not the product of an artist. The blood stains are composed of hemoglobin and give a positive test for serum albumin.”

Although Breault holds an MBA and works in the business world, he devotes a good amount of time studying the shroud, doing presentations or taking part in international conferences. He’s had the opportunity to see the Shroud of Turin three times.

The title of Breault’s Feb. 28 presentation was “Shroud Encounter” and he gave a very detailed and fascinating history lesson of the shroud, including what is depicted on it and its journey through the years from the Middle East to Europe.

The Shroud of Turin wrapped a 5’10” man with Type AB+ blood who had been scourged and crucified. There was blood on the head — possibly from a crown of thorns, abrasions and bruises on the face, a wound on one side, more than 120 whip marks, blood on the arms, nail wounds in the wrists and feet and unbroken legs. The linen was exceptionally fine and showed no stains of decomposition.

Hearing the description of the body brought Jesus’ crucifixion to life for members of the audience. Judy Massey, who belongs to Fox Valley Christian Fellowship, was moved by Breault’s presentation. “I think it was a real inspiration and encouragement to my faith of what Christ did and the price that he paid for us — his great love and his great sacrifice. It’s a mystery that we can access by faith.”

Sunday’s presentation was broken into two parts, “The Day the Shroud Foiled Hitler” and “The Seven Secrets of The Shroud.” According to Breault, Hitler was determined to obtain the Shroud of Turin. In September of 1943 the Nazis were within 20 feet of the shroud but it was hidden by an altar and, thanks to the power of prayer, never found, he said.

Of the seven secrets of the shroud, the one that resonated most with the audience was the fact that the shroud isn’t just a relic or artifact, it’s a receipt. “Our sins have been bought and paid for. We have been redeemed,” said Breault.

Doug Sweere, a member of St. John/Sacred Heart Parish in Sherwood, was intrigued by Breault’s presentation. “I’ve been kind of following the shroud since I was a teenager. Every few years they’d release a little more research on it,” he said. “The talk Saturday night filled in a lot of gaps that I had knowing what it’s all about. If you know that, it is definitely the burial cloth of Christ. There’s an actual physical relic of Christ.

“Some of the things that were unexplained on the image, like the flash of light Russ explained (which caused the image to be imbedded on the cloth), sealed the deal for me regarding Christ being an authentic being on Earth. It very much deepened my faith,” added Sweere.