Centenarian Courtland Smith still drives himself to church every week

MARINETTE — Courtland Smith enjoys driving around the Marinette/Menominee area. He was born and raised here and has spent the entirety of his life between these two cities, faithfully attending Mass at St. Joseph, St. Ann, Holy Spirit, and presently, Our Lady of Lourdes churches. “I’m in the car every day,” he says. 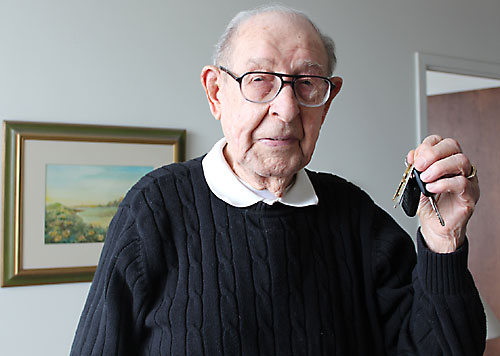 St. Joseph and Our Lady of Lourdes are the church sites that make up Holy Family Parish. Not much has changed since Smith made his first Communion at St. Joseph over 90 years ago. “That’s a nice church, when you get in and look at that big stained glass window,” he says. “It’s nice there.”

This brazen centenarian is still as sharp as a tack and his dedicated Mass attendance is a testament to that. Each week after picking up his sister, Camille Lemire, 96, he attends 4 p.m. Mass at Our Lady of Lourdes. “I go sit by my friends and she goes and sits by her friends,” says Smith.

Even inclement weather doesn’t seem to bother him. “Don’t make no difference, as long as the car starts.”

This year’s winter has been particularly kind to him, except for the cold. “It’s not bad snow this year yet. The cold is hard. When it’s minus-20, the car starts, but holy cow!”

Weekend Mass isn’t the only recurring event he’s willing to scrape his car windshield off to attend.

Smith visits his sister at the Luther Home every Wednesday at 2 p.m. when they have Mass and say the rosary. Even though they don’t sit together at Mass, these weekly visits keep them close to each other and to the memory of their large family. “We also like going out to lunch once in a while. … There’s only two of us left out of seven.”

From there, he heads back over to Our Lady of Lourdes in order to arrive at 4 p.m. sharp. “I’ve got to make sure I leave on time. I go to the chapel, too, at Lourdes, the adoration chapel. I’ve been doing that ever since it started, about 15 years ago,” says Smith.

Smith’s devotion and commitment to weekly Mass was cultivated by the example of his parents growing up. Since then, he has seen the impact it has made on his life. “I went to Communion. … It makes you feel good, especially when you come out of the confessional. Ain’t nothing to it! That’s where you get help when you need it.”

To him, faith isn’t complicated. It’s about just showing up and being present to the grace that is offered. “If I wouldn’t have that I wouldn’t have nothing. I owe everything to my faith,” he says. It’s the value of his Catholic faith that keeps him coming to Mass each week no matter the weather.

On the off-chance you catch Smith when he isn’t in motion, you can find him reading a newspaper (Eagle Herald, Green Bay Press Gazette and The Compass are all favorites) or watching the Packers. Even though he has had multiple opportunities to watch a game at Lambeau Field, that’s one leap he hasn’t taken yet.

“It’s too cold. I’d freeze to death out there,” says Smith. “I like to watch them on TV … till I see some real bad plays, then I turn it off. Oh, terrible.”

Thankfully, Smith also enjoys watching the Badgers, who have given him something to cheer for this winter. Coming up, there is yet another reason to celebrate.

Smith will be turning 101 on March 24. Last year was the big 1-0-0 and he had a remarkable birthday party with 60 to 70 people in attendance. This year will be a little quieter. “I am hoping for some lemon pie. … My wife (Jane, who passed away in 1981) used to make lemon pie,” says Smith, musing on the thought.

One hundred years of a life well lived has given Smith much to reflect on. Amid his stack of reading materials is a book given to him by his niece. It’s called “If I Live to Be 100: Lessons from the Centenarians.”

His contribution to the book would be decidedly simpler. He attributes his long life to one particular habit: “When I’m hungry, I eat.” Smith finds it funny that others stress out about meal times and plan life rigidly around them.

His other piece of advice on how to live to 100 is characteristically simple, straightforward and something even the youngest among us can appreciate. “Take it one day at a time. That is all you can do.”