I remember her vividly, as if it were yesterday. There was so much about her that made you want to come to school. As I look at her through the eyes of a Christian steward, I could see why my second grade teacher, Sr. Esther Joy VanDerLoop, was the perfect person to inspire and care for the close to 50 7-year-olds in her classroom.

Wearing the cream and black habit of the Racine Dominicans, it served as a reminder of where her priorities were and an ongoing invitation to her children. When we were asked to draw a picture of what we wanted to be when we grew up, all but one of the girls drew a picture of themselves as a sister. I have to chuckle now when I think of the positive impact she had on us but actually, it went beyond her graceful stature in her habit. 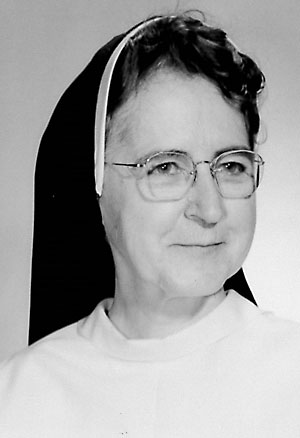 Sr. Esther was able to use her God-given talents as a teacher. Her joy and faith were passed on to us while we were in her care. It seemed like there was something for each of us and school was an experience of Jesus’ love as well as a place for gaining knowledge. Not all classrooms were like that in the early ’60s.

I believe that she was an expert at time management because we accomplished so much in that one year. Not only did we hone our skills in the three “R’s” but we were perfectly prepared for first penance and first Communion. We played a game to help us remember the answers to the questions found in the catechism. We also said the rosary on our knees in Latin every day after lunch and filled our rice bowls during Lent. She was with us at Mass each day and encouraged us to come on Saturday as well. She would have her classroom open and we could work on a special craft with her after Mass.

Sr. Esther was also a very affirming woman who loved art, music and literature. She would often encourage us to finish our projects and would have us all singing as she played something fun on the violin. At the end of the day she would read aloud a chapter from a book. I remember “Heidi” as one of my favorites.

Fifty years ago the main thrust of our church was doctrine and catechesis. Today, while still holding those pieces as important elements, we talk about helping to form disciples through evangelization and a sense of belonging. I believe that Sr. Esther exuded such a beautiful faith through her ability to be a good steward of her gifts and vocation. No doubt, if she would have been called to serve in current times she would be as impactful as she was when I was in second grade. It was obvious she loved Jesus, the church and us. I believe that she was an important assistant to my parents as I was learning about gratitude, prayer, service and sharing.

Sr. Esther Joy Van Der Loop was 53 years old when I encountered her as a second grade student.

It was the sparkle in her eye, her love and her many gifts that touched me so deeply that I would remember her so clearly. She officially became a member of the Communion of Saints on Feb. 22, 1989. She was 79 years old and had just celebrated her 60th anniversary as a member of the Racine Dominicans. What a lot of “Joy” on earth!

As we celebrate the Year of Consecrated Life, I would like the Racine Dominicans — as well as all the religious — to know how grateful I am to have encountered you in my lifetime. If I were to sit down and write articles on each of you, well, let’s just say it would be a book.

I would invite all readers to celebrate the Year of Consecrated Life with me by going to the website of your favorite religious community. Find out how to tell one of your own stories and thank them for how they have impacted your life. No doubt, they deserve our gratitude and we deserve the joy of remembering.