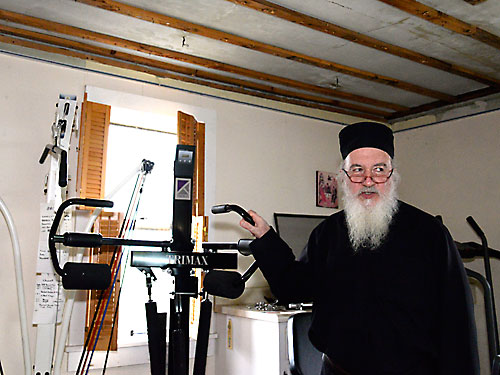 Abbot Nicholas Zachariadis stands in a third-floor room at Holy Resurrection Monastery in St. Nazianz that needs the ceiling repaired. The Eastern Catholic monks are seeking to raise money for repairs to their 150-year-old monastery. (Benjamin Wideman | For The Compass)

“Without repairs to our monastery, there’s absolutely a possibility we won’t be able to be here anymore,” he said. “We need somewhere to live. And there are problems that need immediate attention.”

The seven members of Holy Resurrection Monastery — a Byzantine monastery of the Romanian Greek-Catholic Church — are striving to raise $95,000 for necessary repairs to their rural Manitowoc County monastery, which they’ve called home since moving in 2011 from their previous location in California’s Mojave Desert.

Their GoFundMe page (on the fundraising website www.gofundme.com) has resulted in more than $16,000 in donations during its first two weeks.

The monastery was constructed in the 1860s and originally was used as an orphanage and hospital. In the 1890s it was converted into a convent, and years later it became the Maria Haus bed and breakfast.

But time hasn’t been kind to the venerable structure. Exacerbating the problem was a severe storm that pummeled the tiny Manitowoc County village in May 2000; baseball-sized hail and 100 mph winds resulted in millions of dollars in damage throughout the community. The building’s heavily damaged roof has yet to be fully repaired (Abbot Nicholas said insurance stopped paying for it before it was completed), resulting in water damage that continues to get worse.

“This is an old building, but it’s very important to the history of the St. Nazianz community and we love it very much,” Abbot Nicholas said. “But it definitely needs a lot of repairs.”

The necessary repairs on the three-story building are broken down into three stages.

The first stage, which will cost about $35,000, is aimed at repairing the roof’s soffit and fascia, as well as the trim. The monks say that waterproofing their building is “one of the keys to our future economic security.”

“Stopping water from getting into the building is pretty urgent, because the more water that gets in, the more internal damage to the walls it causes,” said Abbot Nicholas, noting that water damage has crept into their chapel as well. “As soon as we raise enough money for that, we will get started on it immediately.”

The second stage, which will cost about $10,000, involves repairing the ceilings and plaster in many of the monks’ bedrooms (which are on the third floor, where most of the interior damage is easily visible) and in some of the guest rooms on the second floor, as well. Much of the hallway flooring on the third floor is down to the bare wood (tile/carpet hasn’t been replaced since the storm hit), and the entire ceiling in a room in which they grow tomatoes during the winter is basically gone.

The third stage, estimated to cost about $50,000, includes repairing the external stucco and regrading the building’s exterior. Abbot Nicholas said that scraping, applying chemical solutions and pressure washing hasn’t helped remove the mold present on all sides of the building.

“We basically are asking people to invest in us financially to help us keep doing the good work that we’re doing,” Abbot Nicholas said. “For a small group that’s so new with very few resources … we really do a lot of important work, particularly in the new evangelization in partnership with the Diocese of Green Bay.”

The monks teach adult education in the diocese, give retreats, missions and talks, and the monastery is also a pilgrimage site for the Year of Consecrated Life. “One of our younger members is going to be teaching moral theology to teachers of theology in the diocese,” added Abbot Nicholas.

Their primary source of income is hosting retreats and bake sales.

“We can pretty much support ourselves by the work we do,” Abbot Nicholas said, “but it doesn’t bring in the type of money needed to pay a mortgage and handle all of the restoration work that is desperately needed for our building.”

The monks also are trying to raise $50,000 on their GoFundMe site for the re-creation of an onion-shaped dome atop the monastery. Money would be used for that after all of the necessary repairs are handled.

“The dome has a decorative element to it, but it’s also meant to help reclaim the history of this place,” Abbot Nicholas said.

He explained that a nearby building, which was demolished in 1949, had an onion dome on it. “The dome was kept for another 50 years to be reused. But 10 years ago or so, they dismantled it,” he said. “We want to replicate that dome. The dome is part of our tradition, very Byzantine. It’s also part of the history of the village because it was in the original building right by here on this land, so it would be nice to reconnect with the religious history of the village.”

He stressed that the first step “is to fix the things that need fixing. Otherwise we won’t have a building on which to put the dome.”

For more information about the monks and Holy Resurrection Monastery, visit www.hrmonline.org. A link to their GoFundMe site is located on the right side of that homepage.