GREEN BAY — What’s your idea of a prayer retreat? Rosaries and reflection? Visits to a holy site or two?

How about the deep-throated rumble of a Harley? 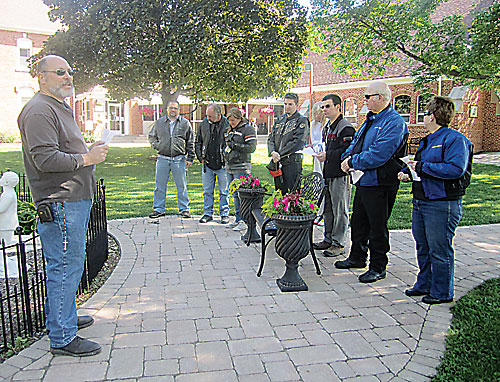 Bernie Terrien, left, leads fellow “Rosary Run” motorcycle riders in recitation of the rosary at last year’s event on the grounds of Our Lady of Good Help Shrine. This year’s Rosary Run will be held June 20. (Photo Courtesy of Bernie Terrien | For The Compass)

On June 20, 2015, the fifth annual Rosary Run will set off from St. Norbert Abbey in De Pere with the Shrine of Our Lady of Good Help as its goal. Along the way, there will be stops at four other holy sites for prayer. All travel will be by motorcycle. Registration will take place at the Abbey in De Pere at 9 a.m.

“Anything that can keep up” is welcome, according to Bernie Terrien of Green Bay. He and his wife, Lynn, began the Rosary Run in 2011 to raise funds for Amigos for Christ, an ecumenical project based in Atlanta and offering aid to the poor in Nicaragua. The Terriens, members of St. Bernard Parish in Green Bay, learned about Amigos for Christ on a mission trip with the group to Chinandega, Nicaragua, with Lynn’s adult daughter in October 2010.

Lynn said, in 2011, that it was the children of Chinandega who stole their hearts.

“When you arrive on the bus,” she said, “the children in the village come out and you’re like a rock star. They are so excited to see you because they know you are going to play with them. All they want is your time. They don’t want things. …. Not that they didn’t have families, they just cherished us spending time with them.”

The Terriens have travelled to Nicaragua every summer since then.

When the Terrens got back to Wisconsin in 2010, they immediately wanted to do more for Amigos for Christ. So, in 2011, they organized their first Rosary Run. It was a way to combine their faith and new love for the children of Nicaragua, with their longtime love of motorcycles.

The first Rosary Run, which started and ended at the Shrine of Our Lady of Good Help in Champion, was a success and they have repeated the ride every year since. The entry fee for each bike in the Rosary Run is $15, with all the funds going to Amigos for Christ.

Bernie explained that the Rosary Run has raised a total of $10,019 in the last four years — not just on entry fees, but also from contributions. “Some riders,” he said, “will pay their registration fee in the morning and write a check for a donation in the afternoon.”

Bernie said those funds have translated to the equivalent of 1.9 miles of new water pipes to get clean drinking water to people in villages in Nicaragua.

“To look at it another way,” Bernie added, “that translates into replacing disease-infested latrines into modern bathroom facilities that include a flush toilet and a shower for 14 families in rural Nicaragua. Without that, just being able to take a shower and having a flush toilet has improved quality of life – eliminating skin diseases and parasites. The number one reason for death in Nicaragua is kidney disease – because they don’t have enough clean drinking water.”

The local Rosary Run remains true to its basic route each year: five stops for prayer at various religious sites around the area, with a decade of rosary prayed at each site. All are welcome, as long as every rider has a motorcycle, or partner or a sidecar.

There are repeat attendees, Bernie said. “One couple, who has joined us three out of the four previous years, travels all the way up from Chicago and back on their motorcycle to participate in the run. They’ve only missed one year – they got married.”

The Rosary Run sites for 2015 include: Bernie and Lynn Terrien, members of St. Bernard Parish in Green Bay, are pictured on Bernie’s Harley Davidson motorcycle outside the Shrine of Our Lady of Good Help in Champion. (Sam Lucero | The Compass)

Lunch will be provided this year by the monks at Holy Resurrection. (Since the meal is being provided, the Terriens are asking for pre-registration via email: [email protected] However, anyone can show up on June 20, pay their $15 and still take part.

“If you show up, not having registered,” Bernie said, “the worse that will happen is that you may be given the default peanut butter and jelly sandwich.”

Peanut butter and jelly are a regular meal for the Terriens. They eat them every Monday in solidarity with the poor

“In Nicaragua,” Bernie said, “you eat peanut butter and jelly every day for lunch. We do it every Monday for lunch (along with praying the rosary) — for a little solidarity with them.”

The Terriens will even provide the rosaries for the Rosary Run — it is a prayer pilgrimage after all. The rosaries are heavy-duty and come courtesy of the Dominican Sisters of the Perpetual Rosary in Milwaukee.

“Mother Miriam and the Dominican Sisters have assured us that they can supply as many blessed, hand-made rosaries as we are capable of giving away,” Bernie said. “These are high quality rosaries made by a friend of their community in Milwaukee.”

Later in summer, Bernie and Lynn will make their annual trip to Nicaragua, just before school starts — they both teach science at Southwest High in Green Bay. For 2016, they are inviting people to join them in Nicaragua. By then, Bernie hopes to have completed training and been ordained as a deacon. He is in his last year of formation with the Diocese of Green Bay.

“I got a big paper for this Saturday that I worried about. It’s about adult faith formation and there’s a little on evangelization — and I think the Rosary Run works into that.”

Rosary Run 2015: Anyone with a motorcycle is welcome to participate in this year’s event June 20. Cost is $15 (pay at sign-in) and funds go to Amigos For Christ (www.amigosforchrist.org). To register, contact Bernie Terrien at (920) 468-9586 or via e-mail [email protected] For more details visit www.rosaryrun.org.