MANITOWOC — When Ken Petersen served as Manitowoc County Sheriff, there were few options for the homeless men encountered by his officers. 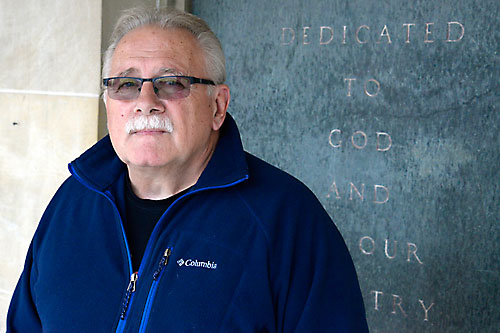 Your Catholic Neighbor: Ken Petersen (Benjamin Wideman | For The Compass)

“In my day, when we’d get somebody who had no support or no place to stay, we’d end up either getting them a motel for the night (with funds from The Salvation Army or human services) or we would drive them to the county line and let them go. Other than that, there was nothing for men who didn’t have a place to stay here,” said Petersen, 66, who retired in 2007 after six years as sheriff and many previous years in law enforcement.

“We were only able to have a Band-Aid approach back then — it didn’t fix anything. Things would keep re-occurring. Getting a guy a hotel room for one night just doesn’t cut it,” he said.

So when Petersen, a member of St. Francis of Assisi Parish, heard about four years ago that the first men’s homeless shelter was being created in Manitowoc, he eagerly joined its board of directors.

The Haven, located at the corner of Marshall and 11th streets in the former St. Boniface School, celebrated its one-year anniversary on April 15. During that time, The Haven served 62 men, providing a total of 2,251 overnight stays.

Petersen and the board of directors — whom he describes as “a super group of talented people” — generally meet once per month to discuss a variety of topics.

“It’s really rewarding when you work with someone and they end up being self-sufficient — you know you’ve accomplished something,” said Petersen, who is on his second term with the board. “You can see the results in this type of place. It’s very fulfilling. I haven’t run into anyone in this building who isn’t respectful and thankful. We haven’t had a police call the entire year.”

Petersen said there’s often a misconception about the men who stay at The Haven.

“We’re dealing with people who, through no fault of their own, lost their jobs,” he said. “Or they might be divorced and don’t have a place to go. Or maybe they don’t have a family or they’ve worn out their welcome somewhere else by staying on couches. When they come here, they get counseling and educated on everything from balancing a checkbook to living on their own and paying their bills, and going to work.”

Petersen attended Sacred Heart School in Manitowoc and went to Mass at St. Andrew before the creation of St. Francis of Assisi Parish. He said there’s definitely a religious component to his volunteer efforts at The Haven.

“The whole crux of The Haven is we like to follow the Beatitudes — how to take care of your neighbor,” he said. “What we’re doing here is helping people. We’re not supporting them all by ourselves. We’re giving them the tools they need to succeed on their own. And when we do that we get them to be self-sufficient, and that helps not only them but everybody else in the community as well.”

In addition, Petersen volunteers at Peter’s Pantry and the Capitol Civic Centre; is a member of the Francis Creek Lions Club; serves on a Crime Stoppers board; and helps on a Relay for Life committee.

Words to live by: “Always tell the truth.”