NEW HOLSTEIN — Try to imagine the number of people who have received food, medicine, clothing and hospital equipment from the Salvatorian Mission Warehouse over the past four decades. The 25,000-square-foot warehouse ships containers ranging from 15,000 to 40,000 pounds each to missionaries around the world — from Central and South America to Africa — every week. It’s done so since 1963, with the help of at least 200 regular volunteers, some of whom are in their second and even third generation.

Working with practiced skill, those volunteers take donated supplies, break open boxes and remove unnecessary packaging that takes up valuable shipping space. Repackaging is handled with scientific precision. Paper products, which weigh less, fill up excess room in large shipments and provide cushioning. Chocolate goes toward the middle of containers, surrounded by items like crackers to provide insulation and prevent melting in hot climates. Everything is tightly packed into shipping containers and onto semi-trailers for shipment to more than 100 missions in 25 countries. 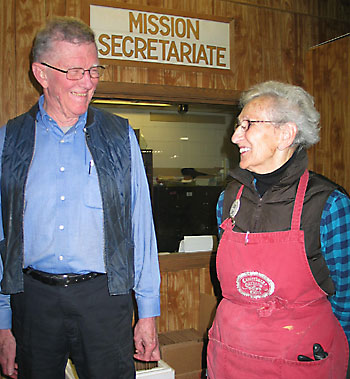 Salvatorian Sr. Dora Zapf and Br. Regis Fust have served together at the Salvatorian Mission Warehouse in New Holstein for decades: Sr. Dora has been there for 42 years and Br. Regis since its founding in 1961. (Patricia Kasten | The Compass)

This is what Salvatorian Br. Regis Fust leaves as he retires and moves to the Society of the Divine Savior’s Alexian Village in Milwaukee this month. At age 83, and with health issues, Br. Regis has turned the work of the warehouse over to Dave Holton, its new director.

“I’ve worked with Br. Regis for four to five months now,” said Holton, “and Br. Regis is nothing short of a genius in how he participates in the world; he’s very consistent with his personality; his personality is very compassionate, it’s very human. He’s very direct and knows what needs to be done. There’s a way he sees the world and is able to stay organized in what others might see as chaos and confusion.”

A series of needs

Br. Regis and Sr. Dora have overseen distribution of aid in circumstances that read like a series of disaster novels. A small sample includes:

“In 1980, in Tanzania, Uganda and Kenya — right after Idi Amin,” Br. Regis recalled. “We shipped there … but Uganda wouldn’t let any medicines in.”

What happened, he recalled, was “we visited, came home and got 100,000 medicines packed in a drum and airlifted it in two weeks. Then we started a shipping container — it took two months to get it shipped through Kenya. Then we did one every three weeks, 20,000 pounds each.”

Sr. Dora noted that the people of Uganda later told her that, while they had had many visitors and offers of help in 1980, “they were surprised that we did (get aid to them) — they sent a letter that we were the only ones. I was so proud of that letter — that said we were different from all the other visitors.”

What makes them different, both agree, also reveals the Salvatorian mission: “From Day One,” Br. Regis said of his community, founded in 1881, “(the mission) was to reach all people, in all parts of the world. Wherever.”

It’s all part of the vowed life that Salvatorians choose when entering consecrated life.

“In our community,” she explained now, “you aren’t sent to the mission, you have to volunteer.”

She did. Sr. Dora, who was born in Germany, served as a missionary in Tanzania from 1961 to 1971. She said that, as with any vocation, “You have to accept it when it comes and be ready. God always prepares you, slowly, and then it falls into place — or it knocks you over.”

In much the same way, the mission warehouse fell into place. Br. Regis joined the Salvatorian community right after graduating from high school in his native Wausau 63 years ago. His sister, who became a nurse, joined the community after him, though she left 12 years later.

“My sister was at a hospital in Columbus,” Br. Regis said of the warehouse’s beginnings. “They had things they didn’t need. She told me to see if we had a use for them.”

His community leader agreed and that started everything, soon followed working with salesmen at St. Mary’s Hospital in Wausau (closed in 1980) to religious sisters staffing (Ministry) St. Joseph’s Hospital in Marshfield.

“Their sisters were (also) in Brazil, so it just mushroomed,” Br. Regis said. “I was still working at the Salvatorian Center then (in the early 1960s) and that’s where the collection was. So it expanded from that.” (The center, now closed, was located in New Holstein.)

Soon missionaries who were home on leave visited parishes in St. Anna and Neenah to speak about the warehouse and raise collections for it. Packing volunteers soon followed. Today, volunteers from St. Ann Parish and Sr. Margaret Mary Parish still help at the warehouse.

The first missionaries the warehouse served were, naturally, Salvatorians. But soon after came Benedictines, then Sisters of Mercy, Medical Missionaries of Mary and even Anglican missionaries. And the list kept growing.

“It expanded to those we had contact with,” Br. Regis explained. “So we got much farther around the world … We always made sure that we were shipping to somebody who was capable of receiving the supplies.”

When he looks back over more than four decades of service, Br. Regis said that what he is most proud of accomplishing is “that we’ve been able to do so much for so many missionaries. When I would give the mission talk, I would say that the missionaries are sent over, that they bring the Word of God to people. But if the people have no food, no clothing, it’s hard to preach to them. By getting supplies there, the missionaries can show a Christ-like love and concern for the people and bring them closer to God.”

That work continues as Br. Regis leaves. Sr. Dora, who oversees the volunteers, will stay. Holton — who worked as associate director of vocations for the Salvatorians for five years — has many plans. He has already reorganized the entire warehouse and added three new missions: two in Ghana and one in Tanzania. He said one of those missions is requesting bicycles. And there is always a need for money to ship containers and for supplies donated by both individuals and large companies like Land’s End, Hershey’s, Georgia Pacific, Fleet Farm, Figi’s and Sargento. Dave Holton, left, is the new director of the Salvatorian Mission Warehouse. He took over earlier this year from Salvatorian Br. Regis Fust, its founder. (Patricia Kasten | The Compass)

“The doors are open to the public,” said Holton, who stressed that his salary is not funded through the warehouse or donations made to it.

“People can come and visit and see where the money is going,” he said. “It’s thriving and it’s a huge ministry and it’s continuing.” (The warehouse is located at 303 Milwaukee Drive, New Holstein.)

Between them, Br. Regis and Sr. Dora have given 122 years to consecrated life, over 100 of them to the mission warehouse. When comparing what they, as vowed Salvatorians do with what lay Salvatorians or any of the many volunteers at the warehouse do, Sr. Dora puts it in terms drawn from the Bible:

“It says in the Gospel, the Scriptures, if you are single, your means are more undivided towards God, whereas a married person is divided between work and your family. So there’s a big difference, right there. You can see it. There is a responsibility towards the family, whereas we don’t have that.”

Br. Regis echoes the sentiment and points to the average warehouse volunteer to illustrate: “They say we need younger volunteers here, but if you’re younger, you’re raising a family, working to support a family, you’re in school, in college, you have kids in that level and you don’t have that time.”

Consecrated life has given both Br. Regis and Sr. Dora the time and the ability to do what lay volunteers cannot: give their lives to supporting the work of the missions, so that “they may know the Savior,” said Sr. Dora, quoting the first point in the Salvatorian charism.

What lies ahead for Br. Regis is up to his Salvatorian superiors and his own interests. Holton believes that Br. Regis is a valuable resource.

“Fr. Joe Rodrigues (the Salvatorian provincial) recognizes that Br. Regis has a lot of skills and abilities still,” Holton said. “I wonder if he won’t tap into Br. Regis’s ability to be connected to people and create awareness of the Salvatorian community itself. I don’t think they’ll let him idly retire down there.”

Sr. Dora agreed. After all, she said, “gardening is not his strong thing.”