ALLOUEZ — What’s in a name? To Fr. Moses Wright, known to friends on Facebook as Hierodeacon Moses, it’s his identity as a Byzantine monk, given to him when he professed his vows on Aug. 15, 1994. 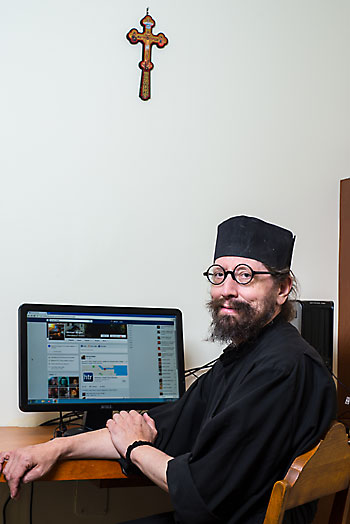 Fr. Moses Wright, known to friends as Hierodeacon Moses, sits in front of his computer at Holy Resurrection Monastery in St. Nazianz. The Byzantine monk filed paperwork Aug. 13 at the Manitowoc County Courthouse to officially change his name to Abouna (Father in Arabic) Moses. The decision was spurred by the social media site, Facebook, forcing him to use his given name, Michael Wright. (Sam Lucero | The Compass)

On Aug. 12 – three days before his 21st anniversary as a monk – Fr. Moses received a notification when he logged on to Facebook. He was told he had to change his name in order to comply with their regulations on authentic identities. Before the end of the day, his profile name changed from Hierodeacon Moses to his given name, Michael Wright. The change did not sit well with the monk, who lives at Holy Resurrection Monastery in St. Nazianz.

“Well, Facebook finally got my name changed!” he wrote. Within minutes, many of his 708 friends began asking why. “Facebook has forbidden religious names and titles. It’s been going on for a while now,” he posted.

Fr. Moses told The Compass in a telephone interview Aug. 13 that very few people know him by his given name. “People, when they saw my secular name on Facebook, they began to ask, ‘Why did you leave the monastery?’ I had to go on and explain what happened,” he said. “I’ve used that name for 20 years now and most people wouldn’t know me by my secular name.”

“Facebook is a community where people use their authentic identities. We require people to provide the name they use in real life; that way, you always know who you’re connecting with. This helps keep our community safe.”

It then lists five categories that are prohibited, including “Titles of any kind (ex: professional, religious).”

Anyone who contests the rule must submit a valid form of identification to Facebook showing their legal name.

Fr. Moses said he knew that Facebook started forbidding the use of religious titles and he is friends on Facebook with many Green Bay diocesan priests who have complied with this rule. There have been online protests to the policy about religious titles, including a petition on Change.org to rescind the rule.

But the Byzantine monk decided he wouldn’t wait for Facebook to change its policy. Instead, he decided to change his name. On Aug. 13, he posted a new announcement:

“Thanks Facebook! After 21 years of using my monastic name, and never officially changing it, today I will petition the State of Wisconsin to ‘OFFICIALLY’ become Monk Moses,” he wrote in a post, which received 80 “likes.”

He then drove to the Manitowoc County Courthouse to begin the process. A post that afternoon let friends know:

According to Fr. Moses, a legal notice must be published in the local paper for three weeks. “Then it requires a hearing before the judge. And hopefully, in a month from now, it will be official,” he said.

Fr. Moses said he considered legally changing his name years ago, when the monastery was located in California. But the cost there was prohibitive and he would have needed to hire a lawyer. He said the process in Wisconsin was simple.

“I looked at how things are done here in Wisconsin and it spurred me on to do what I should have done years ago,” he said.

If he receives the judge’s approval, his legal name will be Abouna Moses.

Abouna is an Arabic word for father, said Fr. Moses. It is also the title for the patriarch of the Oriental Orthodox Church of Ethiopia.