CHAMPION — A decorated World War II veteran was honored at the Shrine of Our Lady of Good Help on Sunday, Nov. 8, just three days shy of Veterans Day.

A statue of St. Michael the Archangel was dedicated and blessed by Father of Mercy Peter Stryker, shrine rector, in honor of Edwin Gerlikowski, a first lieutenant in the U.S. Army. The statue stands in a devotional grotto, behind the shrine, which honors those who have served in the military. Knights of Columbus honor guard members flank the sisters of Edwin Gerlikowski, Ellie and Mary Watermolen, who hold pictures of their late brother in front of the St. Michael the Archangel statue dedicated in his memory Nov. 8. (Sam Lucero | The Compass)

Gerlikowski, a Green Bay native who died in 1994, was a recipient of the Soldier’s Medal for heroism and the Bronze Star Medal for meritorious service. When he was deployed to Europe, Gerlikowski asked his mother, Helen, to continue making her weekly visits to the shrine to pray the rosary and ask the Blessed Mother for his safe return.

Gerlikowski, who had a strong devotion to the Blessed Mother, carried a finger ring rosary with him to war. According to his family, Gerlikowski promised the Blessed Mother that he would do something special for the shrine if he made it home safely from the war.

The soldier did make it home from battle, but not before witnessing the atrocities perpetrated by the Nazis in Germany. On April 29, 1945, Gerlikowski’s 42nd Rainbow Infantry Division liberated approximately 30,000 prisoners at Dachau concentration camp. On March 25, 1945, he rescued a fellow Army officer who was overcome by poisonous fumes inside of a concrete fortress, called a pillbox, carrying him to safety and administering artificial respiration. He later earned the Soldier’s Medal for his actions. 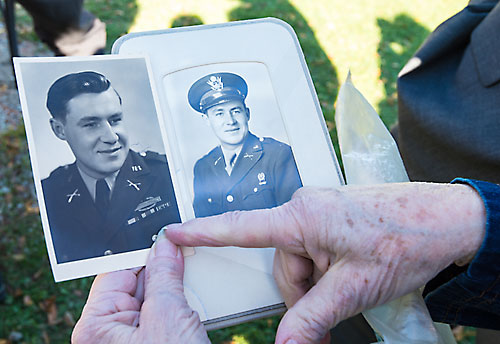 Ellie Watermolen points to a picture of her brother, Edwin Gerlikowski, a World War II hero, following the dedication of a statue in his honor at the Shrine of Our Lady of Good Help. Gerlikowski made a promise to the Blessed Mother that, if he returned from the war, he would do something special for the shrine. He kept his promise with a bequest when he died in 1994. (Sam Lucero | The Compass)

Following the war, Gerlikowski returned home, enrolled at Marquette University and went on to have a successful career as a Green Bay attorney, all the while determined to keep his promise to the Blessed Mother.

When he died, Gerlikowski, who never married, left a generous bequest to the shrine. The funds were used to help pay for restoration work at the chapel, according to his family.

When the Catholic Foundation learned about the gift, Cindi Brawner said the diocese believed Gerlikowski deserved to be recognized for his generosity to the shrine.

“We were informed of a very generous bequest to Our Lady of Good Help by Edwin and we have been, for a number of years, trying to find an appropriate way to honor his memory,” Brawner told The Compass. One thought was to create a memorial at the apparition site, she said, but officials came up with a different plan.

“When we found out a little bit more of his history as a World War II hero, we thought (a statue of St. Michael the Archangel, patron saint of soldiers) would be an appropriate and fitting statue to dedicate to Edwin’s memory.”

Walt Fountain, shrine operations manager, was instrumental in getting the project completed. 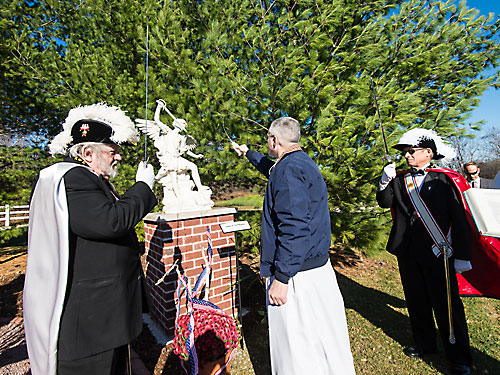 Father of Mercy Peter Stryker, rector of the Shrine of Our Lady of Good Help, blesses the statue of St. Michael the Archangel with holy water during a dedication ceremony held Nov. 8. (Sam Lucero | The Compass)

“We wanted to recognize Edwin’s generosity to the shrine and … we kind of settled in on his military career, because that was a key part of the story,” said Fountain. “He asked his mother to come out here routinely to pray for him. … The whole family rallied to that and brought Mom out here, rain or shine, every Tuesday night to pray for him.”

Fountain said Gerlikowski’s military service was, on its own, worthy of recognition. His love and generosity to the shrine made the memorial fitting.

“It’s a wonderful tribute to this man that we were able to do this here today,” added Fountain.

Before dedicating the statue and blessing it with holy water, Fr. Stryker offered his thanks to Gerlikowski and his family. He reminded the approximately 50 family members and guests seated inside of a pole tent near the devotional grotto that the memorial will bring comfort to many people, including veterans and their families.

“This will continue to be a wonderful place to pray and to ask for the powerful intercession of St. Michael the Archangel, who has been a longtime special patron for those who serve in the military,” he said.

Ellie told The Compass that, when she was 13 or 14, she would drive her mother to the shrine on Tuesday evenings to pray for her brother. “I didn’t have a driver’s license, but I could see over the steering wheel,” she said. “We came to the 9 p.m. novena every Tuesday.”

Her brother needed prayers “for what he saw over there in the service and he came home safely,” she said. “This means a lot because he saw so much.”