Former Notre Dame Academy football standout Peter Mortell is going bigger with his giving this Christmas. Last year, Mortell, punter and holder for the University of Minnesota Golden Gophers, used his $452 gift card from the Citrus Bowl gift package to buy Christmas gifts for kids at St. Joseph’s Home for Children in Minneapolis. This year, he will not only donate his gift card from the Quick Lane Bowl, but has also launched a giving campaign.

Mortell, who was the Big 10 “Punter of the Year” and a first-team all-conference selection in 2014 as a junior, has partnered with the University of Minnesota Masonic Children’s Hospital to raise funds and buy gifts for teenage patients who are spending the holidays in the hospital. Mortell said that many people donate gifts for the younger patients but the teenagers are often overlooked. Through a “Very Specialist Christmas” he hoped to purchase gifts for current and future teenage patients. 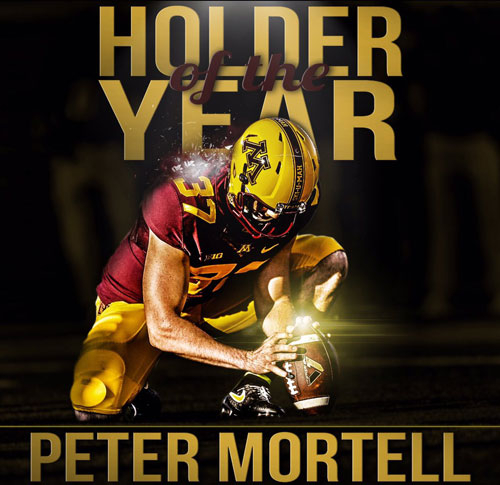 Mortell, who received some national attention earlier this month when at twitter.com/PMortell37  he playfully declared himself “Holder of the Year” in the Big 10, initially set a goal of $10,000, which was achieved in only 12 hours. Because of the generosity of donors, he posted a new goal of $25,000. He had raised $22,400 at the time of this post.

For more information about Mortell’s campaign, go to crowdfund.umn.edu and search “A Very Specialist Christmas.”