GREEN BAY — More than 150 people from the Diocese of Green Bay, who participated in the 44th annual March for Life Jan. 22 in Washington, D.C., found themselves stranded on the Pennsylvania Turnpike near Somerset, Pa., as a snowstorm made the freeway impassable. Members of the Diocese of Green Bay who attended the March for Life in Washington, D.C. wave outside of their bus near Somerset, Pa., where it has been stranded since around 10 p.m. Jan. 22. (Submitted Photo | The Compass)

In a telephone interview Jan. 23, from one of three Lamers coach buses carrying the diocesan pilgrims, Maria Schuette, director of religious education and youth ministry for the Diocese of Green Bay, said that while the snowstorm and resulting freeway shutdown impeded the group’s return home, it became another opportunity for the group “to practice what it means to be pro-life.”

The diocesan pilgrims, which included parish youth groups, Catholic high school students, and their chaperones, departed for the March for Life from St. Pius X Church in Appleton on Jan. 19.

The group participated in service projects and liturgies held in conjunction with the annual pro-life gathering, which marks the 1973 Supreme Court decisions legalizing abortion. Before the march began, Schuette said the group planned to return home immediately after the march in order to avoid the snowstorm. “We were right up in the front of the march,” she said.

Around 2 p.m., the group boarded their coach buses and were on the road home. “We left when the roads were very passable and then probably after about four hours, we came across an accident that happened in front of us,” said Schuette. 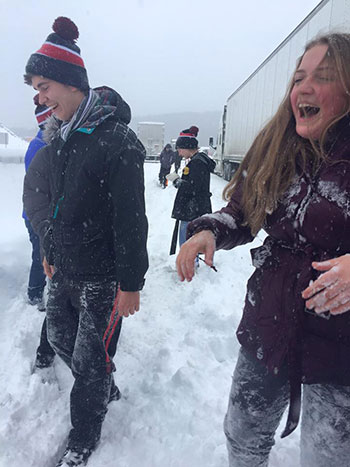 Youth who attended the March for Life in Washington, D.C. stand outside of their bus near Somerset, Penn., where it has been stranded since around 10 p.m. Jan. 22. (Submitted Photo | The Compass)

The falling snow caused a semi-tractor trailer to jack knife, blocking all traffic along the turnpike.

“That slowed everything down. We couldn’t move after that. We’ve been stuck here since 10 last night,” said Schuette.

All three Green Bay buses were traveling together and were stranded close to each other. “One bus is probably a few truck lengths ahead of us,” said Schuette. “Close enough that the kids have been walking” to and from each bus.

Although stranded in the middle of a major snowstorm, which dumped up to three feet in some locations, the Green Bay pilgrims were able turn the negative experience into a positive, Schuette said.

“We have been taking in strangers, people whose cars ran out of fuel,” she said. “It’s definitely been like a God moment for us.”

Five people who were stranded in cars were able to join the pilgrims on the buses.

Among the five was Peter Gabriel from Pittsburgh. Gabriel said he was returning home from work in New Jersey when the snow put a halt to his travels. “I was thinking I was going to make it home and about 4:30 we got stuck,” he told The Compass. His car was low on fuel, so he would turn his car off and on. “I was starting to panic a little bit. Then, somehow, I got a knock on my door.”

The bus driver invited him to join the group from Green Bay. “My car was very cold and these people were so kind to me,” he said. “I got warm, I got water and I got some sleep. Thanks to these kind people I’m going to make it home to my family.”

Schuette said the incident became an extension of the group’s service component.

While in Washington, D.C., the group had options to volunteer at a food bank or visit a nursing home run by the Little Sisters of the Poor. These outreach experiences showed students “what it means to be pro-life,” said Schuette, “and now we are doing the same thing at the side of the road.”

Students were able to venture outside of their buses and check on fellow travelers stranded in cars. They provided them with bottled water and invited them to use the bathrooms on the bus or simply get warm.

Brittney Ballenger, 16, a member of St. Mary Parish in Greenville, said being stranded on the bus for more than 20 hours turned out to be a good experience, just as it was marching with thousands of people “who share our beliefs and protest against abortion.” Being able to help other travelers by providing food and drink and praying for them became a “community-building experience,” she added. “It’s been really awesome. It’s just a really great way to build togetherness with everyone.” Students from the Diocese of Green Bay use pro-life posters to clean snow from a car’s windshield. A major snowstorm stranded the group on buses near Somerset, Penn., since around 10 p.m. Jan. 22. (Submitted Photo | The Compass)

“Honestly, it’s been a really positive experience, said Schuette, who has participated in seven Marches for Life, including two as diocesan director of religious education and youth ministry. “They have kind of made the most of the situation. They’ve gotten out, cleaned off visitors’ cars, shared food and had snowball fights.”

Laura Bovee, youth ministry coordinator at St. Mary Parish in Greenville, accompanied 25 students to the March for Life, including her two children, Jacob and Amanda. Bovee said students have handled the snow emergency with grace. “The kids are having a blast. They are feeling very charitable, being able to let others on bus,” she said. “There’s always a silver lining and God is always present giving them a chance to reach out to other people, an opportunity to be Christ to others. They are definitely rising to the challenge.”

Danny Stewart, 17, a junior at Notre Dame Academy in Green Bay, was participating in his first March for Life. He viewed the snow delay in philosophical terms. “A pilgrimage is like an adventure and you’re going to experience times that are difficult,” he said. “This is part of the difficult time so far. It’s just crazy.”

Through a March for Life Facebook page, the group has been able to keep in contact with family and friends during their ordeal.

Derrick Diedrich, 17, of Hortonville, said 20 hours stranded on the bus allowed the young adults to get better acquainted.

“It was a good time to get to know other people on the bus. We had snowball fights. It was kind of fun,” he said.

But the fun and comfort ended when the youths realized the scores of other nearby stranded motorist’s had few comforts, including little or no food.

“So we took food, got off the bus and gave to other stranded motorists,” Diedrich said. “We practiced our faith.”

The youth group’s ordeal ended when a truck from the Pennsylvania National Guard pulled the buses from 18 inches of accumulated snow.

After nearly an entire day being stranded, the buses were back on the road. They returned to Appleton on Sunday, Jan. 24, just in time to attend the 10:30 a.m. Mass, which included a big welcome from parishioners.

Schuette added that prayers from families and other people who followed their trip on Facebook were helpful. “We really felt the prayers through the whole pilgrimage. We couldn’t have done it without them.”

It was an opportunity for the group to offer their prayers for others, added Schuette. “All the kids stepped up,” helping to recite the rosary and pray not only for their own rescue, but for the safety of national guardsmen, the highway patrol and fellow travelers, she said.