HOWARD — Theresa Flores was a “good kid” from a good Irish Catholic family — active in her church and a member of the high school track team. No one could have predicted that she would become a victim of child sex trafficking.

“I had a normal life, but none of that protected me from being trafficked,” said Flores, who delivered the keynote at “Human Trafficking is Here,” an awareness event held Jan. 16 at St. John the Baptist Church. 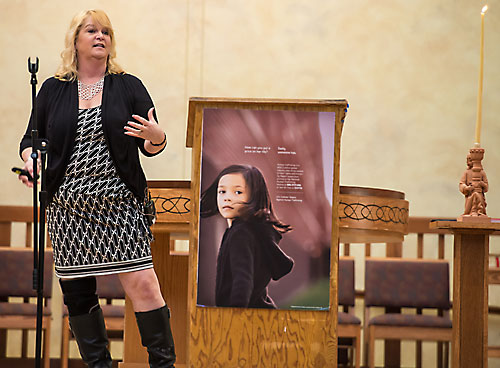 During her address at Jan. 16 at St. John the Baptist Church in Howard, Theresa Flores told some 400 people that her experience as a victim of human trafficking began after she was drugged, sexually abused and blackmailed at age 15. (Sam Lucero | The Compass)

Flores presented facts and statistics about sex trafficking, a modern-day form of slavery in which a commercial sex act is induced by force, fraud or coercion. She also spoke about the breakdown of family values today, but it was her survivor story that drew a standing ovation from the approximately 400 in attendance.

Pimps, also known as traffickers, target the vulnerable. Flores’ vulnerability was simply being the new kid. Her family moved every two years for her father’s job at General Electric. She was 15 when they relocated to the Detroit area.

Flores noticed a boy at her new school who was different than the other boys. He dressed nicely, had jewelry and wore cologne.

“He started paying attention to me. I was starved for attention, like any 15-year-old girl,” she said.

Her father would not allow her to date until she was 16. The boy began calling the house, but no dating also meant no phone calls.

One day, the boy offered Flores a ride home from school after track practice. She accepted. Instead of taking her straight home, he took her to his house where he laced her soda with a drug and raped her.

“I ignored those red flags,” she said. “I didn’t tell anyone. I felt guilty. I let this happen.”

Several days later, the boy approached her with an envelope of photos his cousin had taken of her at his house. She had to “earn the photos back.”

This started two years of terror where Flores had to sneak out of her house at night to be taken to upscale homes where she was used for sex. She would return at 3 a.m., run a hot bath, pray and then get a couple hours sleep before school. No one had any idea what she was going through.

“They threatened to kill my family, to kill my brothers,” said Flores. “They followed me home from school.” About 400 people were on hand Jan. 16 at St. John the Baptist Church in Howard to listen to Theresa Flores talk about her experience as a victim of human trafficking. (Sam Lucero | The Compass)

Her traffickers also put dead animals in her mailbox and showed up at the location of her part-time job as forms of intimidation.

“They would just stand in the door,” she explained. “They never ordered anything. I had no idea how to get out”

Her “worst night” was a turning point. Flores was drugged, raped, beaten and taken to a motel in the inner city of Detroit. She was auctioned off to the highest bidder. They didn’t take her home that night. She was left in the motel room with no shoes, money or identification. She stumbled to a nearby diner.

“I believe that God sends you an angel in your worst moment,” she said.

Her angel was a waitress, an older woman pouring coffee for the homeless at 5 a.m., who recognized that she needed help and called the police.

“I was blessed to move again for my father’s job,” she said. “Most don’t escape.”

Eight years ago, Flores, who was working as a bilingual social worker, discovered her calling to speak about trafficking when she attended a conference about the crime.

“I had never known what to call what happened to me,” she said.

She tells her story in her book, “The Slave Across the Street.” In an effort to assist trafficking victims, Flores started SOAP (Save Our Adolescents from Prostitution). Bars of soap featuring the human trafficking hotline phone number are placed in motel and hotel bathrooms. SOAP will have a presence at the Super Bowl for the sixth consecutive year.

The awareness event was facilitated by Sr. Celine Goessl, a Sister of Mercy of the Holy Cross, who served as the opening speaker. Sr. Celine explained that human trafficking is found in all 72 counties in Wisconsin. The network of highways in the state makes transporting victims much easier.

“Education is the big thing,” said Sr. Celine. “I’ve been doing only education in the state of Wisconsin since 2008. I’m still going out to churches and organizations and finding people who are not even aware that this is happening.”

Dr. Jim Gibson, an obstetrician-gynecologist, was among those who attended the awareness event. He said that he had delivered the child of a patient who may have been a victim of human Sister of Mercy of the Holy Cross Celine Goessl speaks to Dr. Jim Gibson, one of some 400 people who attended the Jan. 16 conference on human trafficking. Gibson, an obstetrician-gynecologist, asked Sr. Celine about a tattoo on a young women whose baby he delivered. The tattoo said “property of.” (Sam Lucero | The Compass)

“I noticed a tattoo on her neck that said ‘property of,’” he explained. “It didn’t seem like anything criminal was going on. She was just there to have a baby. I was the covering physician.”

Dr. Gibson, a member of St. Bernard Parish in Green Bay, discussed the tattoo with Sr. Celine, who confirmed that it is often a sign of trafficking.

“The medical community is very ignorant of it,” said Dr. Gibson. “I have not had any education on this. … I’m certainly going to talk to the hospital administrators about it.”

“We can’t arrest our way out of this problem,” he said. “This is not a Detroit, Milwaukee or Chicago problem; this is our problem.”

Elliott explained that the police do not like to arrest victims, but the arrest can serve as a rescue. Victims who are arrested receive counseling, job training, safe housing and mentoring.

Educating the men who pay for sex about the damaging effects on the women is essential, said Elliott. He is involved with the AIM (Awareness and Information for Men) program, where men charged for solicitation of prostitution are required to attend a one-day session.

Exhibitors at the event offered resources to help victims and combat sex trafficking. Sr. Celine, who will speak about human trafficking on Jan. 28 at the Norbertine Center for Spirituality at St. Norbert Abbey in De Pere, also announced that the Catholic sisters of Wisconsin will be sending a human trafficking toolkit to every parish in the state. She was pleased with the turnout for the awareness event.

“The hope is that, because they are here, because they need to, they will share their knowledge with others and make other people aware,” she said.