CHAMPION — Since 1995, Fr. Ubald Rugirangoga has been preaching about forgiveness, mercy and reconciliation. The African priest speaks from the heart, having survived the 1994 genocide in his native Rwanda that killed some 800,000 people, including more than 80 members of his family.

“Forgiveness is always needed, but specifically in this Year of Mercy,” Fr. Ubald told The Compass in an interview before celebrating a healing Mass Jan. 29 at the Shrine of Our Lady of Good Help, the first of two Masses celebrated at the shrine during a U.S. tour that ends in March. 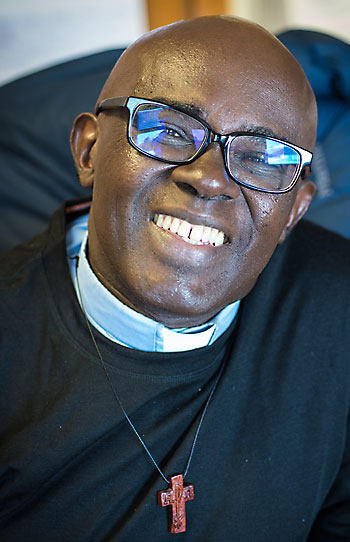 Fr. Ubald Rugirangoga, a priest from the Diocese of Cyangugu in Rwanda, celebrated two healing Masses at the Shrine of Our Lady of Good Help last week. The priest, who survived his country’s genocide in 1994, speaks about forgiveness and reconciliation. (Sam Lucero | The Compass)

“For me, forgiveness is a gift from God,” said Fr. Ubald, whose ethnic Tutsi background targeted him for persecution by the Hutu majority throughout his childhood. The oldest of four children, the priest’s first recollection of violence against Tutsis was at age 5 or 6.

“Some nights I would go with my mother and hide in the bush,” Fr. Ubald wrote in a post on his website, frubald.com. “I learned later that it was because of our ethnicity.” His father, along with all the Tutsi men of their village, was killed in 1963, leaving his mother to raise four children.

Following elementary school, Fr. Ubald entered seminary. But even there, ethnic violence prevailed. He said Hutu seminarians planned to kill Tutsi seminarians in 1973. “The priests who couldn’t control the situation helped us to escape.”

Fr. Ubald fled to Burundi to complete his seminary studies. He was ordained a priest for the Diocese of Cyangugu, Rwanda, in July 1984 and was assigned to a parish in Nyamasheke. Later, he discerned a vocation of praying for the healing of sick people, he said. Tensions between Tutsis and Hutus continued until the 1994 genocide took place.

Fr. Ubald, astonished that Hutu parishioners were killing fellow Tutsi parishioners, had to flee to his bishop’s house to avoid death. In all, he said, 45,000 members of his parish were killed in three days. The priest said he believed God wanted him to seek refuge outside of the country in order to return and evangelize. He escaped Rwanda on foot, spent two months in the neighboring Democratic Republic of the Congo (then Zaire) and fled to France.

While in France, he said a difficult conversion process began after taking part in Stations of the Cross at the Shrine of Our Lady of Lourdes. “The genocide against people of Tutsi ethnicity was, for me, a cross to carry,” he wrote. “Without accepting it as a cross to carry, nobody can forgive.”

Fr. Ubald returned to Rwanda on May 1, 1995, and immediately began helping people overcome the trauma suffered during 100 days of mass slaughter. He reached out to both the Tutsi victims and to the Hutu perpetrators.

“After four years of evangelization, speaking about forgiveness and reconciliation, my bishop gave me a new mission,” Fr. Ubald wrote, “to be pastor of Mushaka parish.” Part of his ministry was to lead retreats, reminding people that all were made in God’s image and that ideology — not Hutu and Tutsi ethnicity — was the root of violence and mistrust.

Fr. Ubald’s ministry of mercy and forgiveness in Rwanda began at his own doorstep.

Among family members killed was his mother. She was murdered on April 17, 1994, and the mayor who ordered her killing, among many others, is in prison in Rusizi, Rwanda.

“I forgave the murderer of my mother,” Fr. Ubaldi told The Compass. “What I can say about forgiveness is that, without mercy, forgiveness isn’t right. If we forgive, we have to be merciful. If you are not merciful to that one who made wrong to you, it means that your forgiveness is not complete. No, you are a hypocrite.”

Not only has Fr. Ubald forgiven the man responsible for his mother’s death, he is supporting the man’s children.

“His wife died when he was in prison and I take care of his two children,” said Fr. Ubald. The oldest, a girl, attends medical school in Burundi. The boy is at a center for re-education.

“The one who is at the university, when she comes home, she visits me,” he said. “She shows me how she’s studying.” He enrolled her at a university in Burundi “because I preferred to send her abroad to avoid the humiliation” of her family’s past.

The boy has struggled with drug problems and Fr. Ubald believes his father’s past is the cause. “He’s suffering from what his father has done. … When I was helping him, he said, ‘It looks as if what my father has done is on my face.’ I think soon he will be OK and I am ready to take him home,” added Fr. Ubald.

“Now I understand what parents are suffering (raising children) because the daughter is studying well but, with the young boy, it is the problem,” he said with a laugh. “The girl, I think she will be a good doctor and she will take care of me when I will be an old man.”

Thanks to Fr. Ubald’s example and his message of forgiveness, he has helped other Rwandans find peace.

“In that parish, it has been an experience of unity and reconciliation,” he said. “After listening to me preach, one young woman, whose father killed a man and made the wife a widow, said, ‘I made a decision. I go to that widow and deliver” a message of forgiveness.

The widow accepted her message, but the woman’s son was angry. Eventually, he also forgave the daughter and they were later married.

“He got married with the daughter and they now have three children. It is a happy family,” said Fr. Ubald. “That is from what I have done and many of my Christians did the same. Those who had to beg pardon, they did that sincerely. Those who had to forgive, they forgave.”

Fr. Ubald’s message to Catholics, especially in this Year of Mercy, is to pray for the grace to offer and accept forgiveness.

“Forgiveness is sometimes difficult, but it is always possible,” he said. “And it makes you free. Jesus has forgiven us. We didn’t beg pardon, no, but he made a decision. ‘Forgive them forever. They don’t know what they are doing.’ That is what we have learned from Jesus. He has forgiven at the cross. Nobody has begged a pardon but he made a decision and we have to do the same.”

A documentary of Fr. Ubald’s life, “Forgiveness: The Secret of Peace,” is currently being filmed. See the movie trailer below.