Packers coach delivers final keynote, tells men they should ‘be remembered for what we do for others’

GREEN BAY — “Men for All Seasons,” the 2016 Green Bay men’s conference, provided affirmation for Bishop David Ricken. Approximately 1,500 men attended, confession lines were steady throughout the day and the keynote speakers received appreciation from the audience in the form of standing ovations. 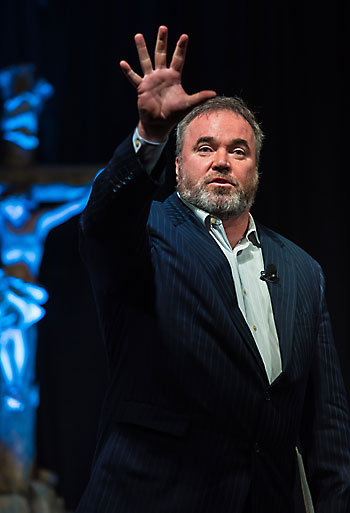 “Mercy really seems to be the theme that took over with the speakers, which is great because this is the Year of Mercy,” said Bishop Ricken. “It’s been great fruit. I’m struck by the quality of men we have in the diocese. This is really meeting their needs, which I was hoping for. I kind of thought it was right, but now I know it is right.”

“He really worked hard on his talk,” said Bishop Ricken. “He’s nervous like I’m nervous when I throw out the pass (at the annual Bishop’s Charities Game).”

McCarthy incorporated humor in his talk. He made an early note that Jesus (a crucifix was on stage) was looking over his shoulder.

The coach, now in his 11th season as the head man of the Packers, spoke about growing up in an Irish Catholic family and his experiences at St. Rosalia on Greenfield Avenue in Pittsburgh. McCarthy was an altar server as a boy. The stories he shared from his youth included going overboard with the incense at a funeral Mass and his first fight after being called a fish eater on the playground of the public school he attended in fourth or fifth grade.

“I am so thankful for growing up Catholic,” said McCarthy. “It’s the foundation of everything I believe in.” 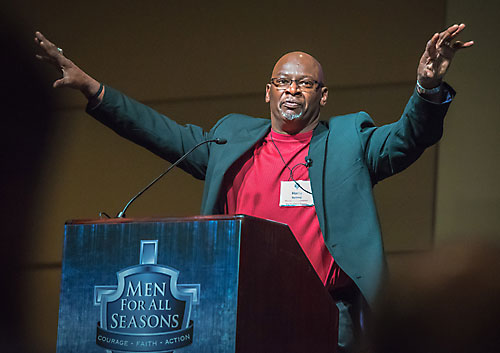 A discussion among Packers’ coaches and players that involved offensive coordinator Edgar Bennett, was the source for a challenge by McCarthy to the men at the conference. “What is your why?” Bennett asked. He shared that his is faith, family and football.

He explained that faith plus family equals foundation.

The why and how lead to the mission, which for McCarthy is three-tiered.

“Mission is reflection, where you came from, how you built that foundation; ambition, go for it; and the third part is giving back,” he explained. 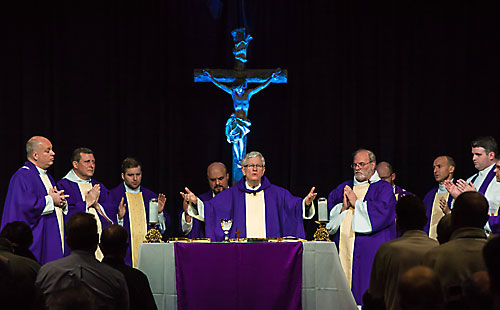 Bishop David Ricken is joined by priests and deacons during the celebration of Mass, which concluded the day at the Green Bay Men’s Conference. This year’s conference was the first organized jointly by the Diocese of Green Bay, Esto Vir and St. Norbert Abbey. (Sam Lucero | The Compass)

Videos, featuring Packer highlights, movie clips and McCarthy’s trip to Pittsburgh during last season’s bye week, were shown to represent reflection, ambition and giving back. The McCarthy Family Foundation supports numerous charities and projects. In addition to providing outreach in Green Bay and Pittsburgh, he has also supported the Seven Loaves Project, which builds bakeries in Rwanda.

A fourth video, which showcased several highlight plays by the Packers, promoted inspiration.

“Sometimes we need a little kick, a little fuel, and there’s no better inspiration than the Bible,” said McCarthy. “I use the Bible quite a bit.”

McCarthy encouraged the men to exhibit faith and family at work. He spoke about the final three minutes of preparation for the Packers prior to a game. He reads from Scripture and then invites the three captains for that week to share some words. He closed with one more challenge for the men.

“Let’s be remembered for what we do for others,” he said.

Jim VandeHey kicked off the keynotes of the day with his presentation “An Outdoorsman for All Seasons.” While the outdoors served as the background for his talk, he delivered a broad message for all in attendance. VandeHey encouraged the men to help overcome the shortage of holy families teaching children how to pray and the need to see God in their lives.

VandeHey showed a video about his son, Cole, who was stricken with a life-threatening illness in 2010. The block in Cole’s spine that caused paralysis eventually went away. VandeHey has no explanation about why his prayers were answered.

“We need to become hopeful people because it changes us,” he said.

Fr. Peter Mitchell, pastor of St. Mary of the Immaculate Conception Parish in Greenville, presented “A Father for All Seasons.” Fr. Mitchell discussed the call to be men of prayer and service.

“The younger you are, the more the church needs you,” he said.

He shared his story of his love for St. Faustina and the Divine Mercy message, and spoke about the life of Karol Wojtyla and his experiences with Pope John Paul II, which fueled his call to the priesthood.

Fr. Mitchell offered holy cards with the Divine Mercy image. He also presented a challenge to the men.

“What is God doing with Green Bay?” he asked. “We must be men in love with the word.”

Antonio Soave, acting Secretary of Commerce for the State of Kansas and chair of the Global Foundation for Peace through Soccer, delivered the keynote, “A CEO for All Seasons.” Among his messages was to avoid measuring yourself by how much money you make.

Harry Sydney, former Packers player and coach and founder of My Brother’s Keeper, served as the emcee for the day, which also included eucharistic adoration, presentations by numerous apostolates, and displays and booths by various vendors, apostolates and organizations.

“I like the messages we’ve heard today,” said Sydney. “It’s about what type of man you are going to be. It’s about who you are when nobody is looking.”

Participants were asked to fill out commitment cards indicating action they would be taking as a continuation of the conference experience. Bishop Ricken encouraged performing a spiritual or corporal work of mercy. The conference, a joint effort of the Diocese of Green Bay, Esto Vir and St. Norbert Abbey, closed with Mass celebrated by Bishop Ricken.

The bishop said that separate men’s days will likely be offered next year by Esto Vir and the Norbertine Spirituality Center at St. Norbert Abbey. He hopes that a larger event, like the 2016 offering, will be held every few years.

To view more photos from the men’s conference, go to our Flickr page.