Sr. Maria Marciano, a Dominican sister from Brazil, is serving the poorest of the poor in Haiti, one of the most impoverished countries in the northern hemisphere.

A civil and hydrology engineer with education in economics and business administration, she came to the Dominican Republic in 1994, hoping to work with the needy in Haiti. But the political turmoil in that country prevented her from doing so. Instead, she worked with the destitute in Vallejuelo, a city and region in the Diocese of San Juan, Dominican Republic, that was particularly depressed. 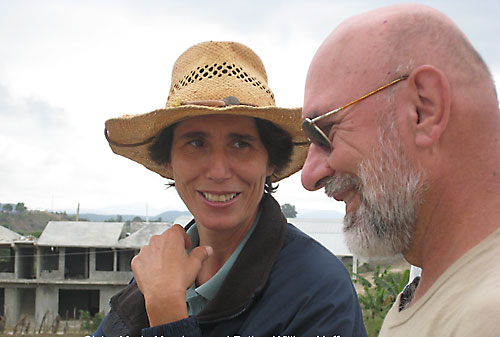 Dominican Sr. Maria Marciano is pictured with Fr. Bill Hoffman, pastor of St. Therese Parish in Appleton, who spent 19 years serving in the Dominican Republic. Sr. Maria began her mission work in the Dominican Republic in 1994 and started serving in neighboring Haiti in 2010. The impoverished countries are located on the Caribbean island of Hispaniola. (Submitted Photo by James Fitzgerald | For The Compass)

In Vallejuelo, she established a reputation as an effective builder and servant of those in need. Her many building projects (constructing roads, water systems, homes, schools, community centers, agricultural and farming projects) provided water for drinking and irrigation, places for educating children and adults, buildings for dispensing over-the-counter medicines and other needs. These successful Vallejuelo projects became the model and basis for her work in Haiti after the 2010 earthquake and cholera outbreak there.

The 2010 earthquake in Haiti awakened Americans to the plight of the Haitian people. The problems of the poor, however, preceded the earthquake and continue very much into the present. The Central Province of Haiti, where Sr. Maria currently works, is perhaps one of the most destitute regions in the entire country.

An unproductive mountainous region within the dioceses of Hinche and Fort Liberté, it consists of more than 1,600 square miles and a population of 1 million that is more than 60 percent Catholic. These two dioceses, especially Hinche, have few roads. Dirt roads that do exist are barely passable.

People in the area have no ready access to clean drinking water, no electricity, very little education, a literacy rate less than 20 percent, homes made from sticks and mud with families sleeping on dirt floors and with malnourished children. The city of Thomassique, Haiti, with 40,000 inhabitants, has no resident doctor and only one nurse to care for the sick. The needs of this section of the country are overwhelming. 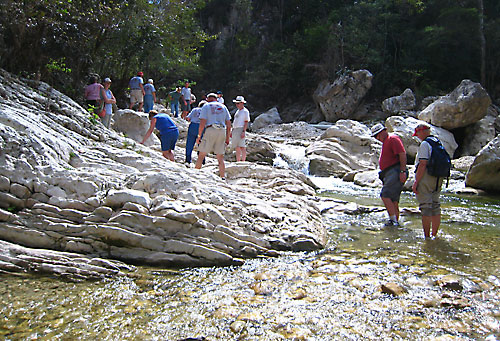 Visitors from the Green Bay Diocese walk through a river in the mountainous region of Haiti, where Sr. Maria Marciano is constructing dams to divert water to homes for drinking and irrigation. (Submitted Photo by James Fitzgerald | For The Compass)

Sr. Maria and her band of hired workers, native volunteer assistants, and part-time missionary helpers from the Diocese of Green Bay have been erecting her various projects over the last few years, trying to transform the unproductive country and provide the people with living conditions that will enable them to sustain themselves over the long run.

Over the past 22 years, Sr. Maria has developed a list of priorities for her mission work. First in importance was the construction of roads. Roads were necessary to connect local communities with one another and to reach the water supplies in the mountains. By 2016, she has built 150 miles of roads in Haiti.

Her second priority was the construction of water systems in the mountains. In Haiti, her workers have constructed dams in the mountains and piped the mountain water from springs and dams to several cisterns on the lower hills that then conduct the water to thousands of homes for drinking and to farm fields for irrigation. The water systems work by gravity because electricity does not exist in this mountainous region.

At Tiroly, Haiti, her original plan in 2015 was to build a four-classroom school. Before the plan could be implemented, the demand for classrooms increased so dramatically that it had to be changed to an 18-classroom school, with 30 students to a class. Once finished, the school will be turned over to the Haitian government, which has agreed to hire and pay certified teachers at the school.

The fourth priority is to demonstrate productive modern farming methods for local consumption and for cash crops. The agricultural formation centers are where Sr. Maria has demonstrated how to use irrigation and modern technology can double and triple productivity of crops grown in the region.

At Los Cacaos, Haiti, she is constructing an agricultural center, called “Seed of Life,” consisting of a large meeting room for instruction on farming methods, a six-bedroom dormitory for farmers who will come to learn modern cropping practices, an office and storage building, an irrigated field for growing vegetables, and a greenhouse for growing trees for reforestation and vegetables from seeds.

Sr. Maria’s fifth priority is demonstrating and teaching how best to market agricultural and manufactured products. In Vallejuelo, she established an agricultural cooperative among the farmers to unite them for better collective bargaining to get a fair price for their products. As head of the cooperative, she signed a favorable contract with Frito Lay to purchase her potatoes and those of other farmers in the Vallejuelo area. Collective bargaining has been effective in Vallejuelo and will be part of the projects envisioned in Haiti at the new Seed of Life center.

Sr. Maria’s ultimate goal in managing, directing and building all these projects is to make it possible for the communities she serves to sustain themselves after the foundations have been established.

The projects have also provided employment for a good number of permanent and part-time local construction workers, road builders, carpenters and day laborers. Local volunteer workers, whom she calls her assistants, learn from the skilled laborers and, eventually, as is her aim, they will become independent of her and build and farm their own plots of land, earning enough to support their families.

Sr. Maria also has a five-year plan for future projects. She intends to build six new community centers in various places in the mountainous region for dispensing needed over-the-counter medicines; for educating adults in literacy, nutrition and farming methods; and for holding meetings with local communities.

Some might ask what all this building has to do with religion and Catholicism. Some theologians might respond that these works are a direct form of evangelization; that is, they are in fact a manifestation of what the Catholic tradition and Pope Francis calls the spiritual and corporal works of mercy. In this Year of Mercy, it is particularly important to reflect on how best to serve the needy of the world (Mt. 25:31-46).

To view pictures of Sr. Maria’s many projects and a description of her works in 2016, visit www.sistermariahaiti.com.

Patrick Carey, Ph.D., is a retired professor in the Theology Department at Marquette University and member of St. Thomas the Apostle Parish in Newton. He visited Haiti in February 2016, on a mission trip with four others from the Green Bay Diocese.