Bonnie Lou, who has performed at the Grand Ole Opry, Ryman Auditorium and the top honky-tonks on Broadway Street in Nashville, expresses a similar joy when sharing how her music has touched people in need or those struggling with health problems. 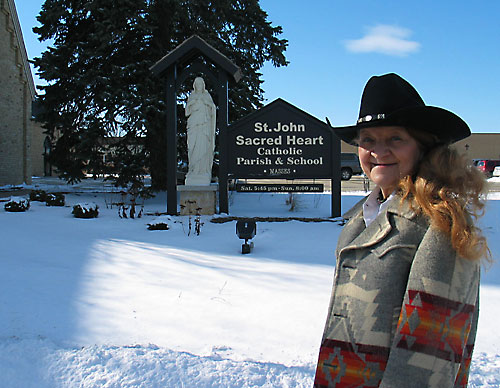 “I played the Thompson Center on College (Avenue) in Appleton,” explained Bonnie Lou. “I played for the Alzheimer’s patients. Music is very therapeutic. They brought one lady in and told me not to feel bad if she acts like you are not even here. … I started singing songs from her era and, all of a sudden, she started crying. She remembered the song. They were crying and the nurse was crying.”

Bonnie Lou, a native of Sherwood, will share her musical gift to benefit St. John-Sacred Heart School in her hometown. She will perform at “SJSH Bids for Kids,” March 19, at High Cliff Restaurant in Sherwood. The event, which opens at 5:30 p.m., will include raffle drawings, live and silent auctions, including the opportunity to bid on artwork by St. John-Sacred Heart students, an hors d’oeuvre buffet, dessert, coffee and complimentary soda.

Bonnie Lou, who has been away from Nashville for 18 years, said her dedication to providing outreach through music was fostered in the “Country Music Capital.”

“I worked with United Cerebral Palsy, St. Jude’s, Saddle Up for St. Jude, rodeos, the Kidney Foundation, the Heart Fund,” she said. “I helped Vince Gill and Garth Brooks with the Frances Williams Preston Lab,” which is part of Vanderbilt-Ingram Cancer Center. In Nashville, she joined other musicians to raise money for children.

“Not one child, if they wanted to learn an instrument, had to go without in Nashville,” she said. “Music has no boundaries. It’s not always people singing in harmony. I do sing-alongs at senior centers. Everyone can sing.”

Bonnie Lou grew up with music on Bishop Valley Farm in Sherwood. Her parents were both singers. She credits her father, Riley, for her songwriting talents. Her grandmother was the first yodeler in the family.

“I always wanted to go with my mom (Luella),” explained Bonnie Lou. “I was the youngest of four children. I always got to go with Mom everywhere. When I couldn’t go with her, she would leave me with Grandma (Grace). I would cry and she would yodel louder than I cried. I must have picked something up from that.”

Performances for Bonnie Lou began at age 5 when she sang for the Farm Bureau in Sherwood.

orange (soda). I think the Barley’s orange meant more than the $1 at the time.”

“The main lady who stuck out in my mind was Patsy Montana,” said Bonnie Lou. “Singers from the WLS (radio) Barn Dance and the Opry would perform at the Chilton Fair. My parents and grandparents would go to see them. They would come to stay at the farm and ride horse.”

Rex Allen, another fantastic yodeler, told me when I was 5, ‘Are you going to be a singer when you grow up?’ I said, ‘Yup.’ Fifty-five or 60 years later, he gave me my award for the Grand National Yodeling Championships in Tucson.”

Recording music and playing at the Grand Ole Opry were longtime goals for Bonnie Lou, so Nashville was her destination. She started by competing in singing contests in the city to gain exposure. She soon worked with such artists as Crystal Gayle, Stella Parton and Jeannie C. Riley.

She played for more than 40 years with the same band, Bonnie Lou Bishop and the Ramblers. When Bonnie Lou takes the stage for “Bids for Kids,” she will not only sing, but also share stories about her life. In 1986, she was diagnosed with ovarian cancer. Music helped her heal.

“They gave me two months to live. I couldn’t go out to sing. I couldn’t walk. I lost all my hair. I was at home most of the time, so I started to learn the fiddle,” Bonnie Lou said.

She said she strongly believes in the power of prayer. “Priests, rabbis, friends, fans and an entire island” prayed for her, while she was battling cancer.

When Bonnie Lou, who also enjoys performing show tunes, was putting a close on her tour schedule, she made sure to take care of her musicians.

“I was responsible for eight families,” she said. “You can’t say, ‘I quit, you’re out of work.’ Everybody had jobs when I parked the bus and came home.”

Among the favorite songs she recorded are “Each Time It Starts to Burn,” “Crazy Arms” and “Cowboy Sweetheart,” which showcases her yodeling talents. In addition to performing, she enjoys cake decorating, making hats and holding tea parties for children. Her goal for the school fundraiser will be the same as her performances throughout her career.