At what age did you first receive Communion?

The Easter season is the time for first holy Communions. I had my first Communion in third grade. Because I attended public school during the day and “CCD” classes on Monday evenings, I had to wait a year for my first Communion. The students at the Catholic school got to receive theirs in second grade. 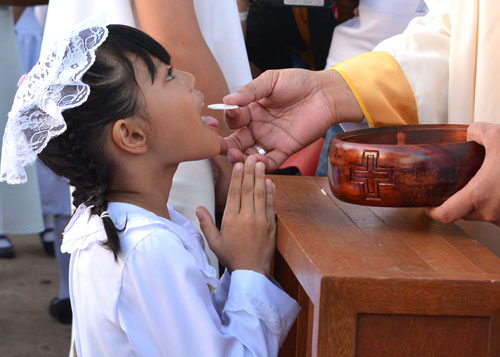 A girl receives Communion during a children’s first Communion Mass at the International Eucharistic Congress in Cebu, Philippines, Jan. 30. The Mass included about 400 extremely poor children, some living on the streets. (CNS photo | Simone Orendain)

As we lined up for Mass, I was taller than most of those second graders. Even in my white dress, gloves and veil, I felt awkward and almost as if I had been “delayed” unfairly.

Well, if it had been just a few decades earlier, I would have been way ahead of the class.

As late as the end of World War I — and even today in some countries like Portugal — it would not have been until my teen years before I would have participated in what was known as “solemn Communion.”

The history of solemn Communion highlights the differences in church practice throughout its history, specifically about when Catholics received “the sacraments of initiation”: baptism, communion and confirmation. At the recent Easter Vigil this year, some adults received these sacraments in the same way most new members did in the earliest days of the church: all three sacraments at the same time during the Easter Vigil.

Even today, in Eastern-rite churches, both Catholic and Orthodox, all three sacraments are still received at one time: by children and babies as well as adults. (Yes, even babies receive the consecrated wine, on the tip of the priest’s finger.) This was actually the general practice in the western church for most of its first millennium.

However, as the early church grew and the new members who entered were not always adults, the practice of infant baptism arose. Before long, baptism was separated from the other sacraments of initiation. Communion and confirmation increasingly came to be considered sacraments that required a certain amount of adult reasoning in order to make a commitment; so they were delayed at least until what we call “the age of reason.” This legal term usually meant the age seven.

There was also something called “the age of discretion,” which was later (usually 12 for girls and 14 for boys) and eventually became tied with confirmation being delayed until upper grades and, eventually, until high school age.

In Europe, but especially countries like France and Germany, solemn communion was delayed until this age of discretion, either at the end of primary school education or in high school — for those children continuing their education. (Many children left school earlier to help on family farms.) This became the custom in countries to which people immigrated — such as Belgians to northeast Wisconsin.

All that changed in 1910. On Aug. 8 that year, Pope Pius X issued a decree (Quam Singulari) that said children should receive the sacraments of Communion and reconciliation at earlier ages. The pope wanted these to take place at “about the seventh year, more or less,” and added that, “A full and perfect knowledge of Christian doctrine is not necessary either for first Confession or for first Communion.”

This changed a lot of things and met with some resistance. Think of what would happen today if people were suddenly told to delay first Communion to age 16.

It would probably be similar to what happened in France, according to the Divine Word Missionaries— only in reverse — after 1910: After Pope Pius X’s decree, French children began receiving first Communion at about seven years of age; then when they reached age 13, they took part in an elaborate public Communion ceremony. The first event was a quiet event with little fanfare. The later, “solemn Communion” included a “High Mass,” renewal of baptismal vows, processions and even consecrations, as well as the Sacrament of Confirmation.

And, of course, there were also new clothes, gifts and parties. The French tradition continued into the 1970s.

Even today, there still are countries that have family gatherings and parties for both events. In a 2009 “Catholic Answers” forum, one reader noted that this is the case in Portugal. “I have many cousins there who made their Solemn Communions long after Vatican II. The practice is still alive in the Azores, … The age was lowered, but the old ceremony was never abolished and is still done to this very day (at least in the Azores). So my cousins got two Communion Masses and parties: at age 7 and at 10 or so.”

Another reader from Canada replied: “I live in Canada and I am of a Portuguese background. I remember having to do my solemn Communion at about 13 years of age. The year after, I was confirmed. It was in essence receiving your first holy Communion again but less ‘ornate’ for a lack of better terms. … It was optional … We also referred to it not only as Comunhão Solene (solemn Communion) but also as Profissão de fé (Profession of Faith).”

In the United States today, the age for confirmation ranges from 7 to 16. The church has left the choice to the local bishops. First Communion is clearly to be given at younger ages, in accord with Pope Pius X’s decree.

As the pope wrote: “It is clear that the age of discretion for receiving holy Communion is that at which the child knows the difference between the eucharistic bread and ordinary, material bread, and can therefore approach the altar with proper devotion. Perfect knowledge of the things of faith, therefore, is not required, for an elementary knowledge suffices.”

The changes required by Pope Pius X took some time to settle in, but, by the end of World War I, the changes had taken effect in most places and children in second — or even third grade — were receiving their first Communions. Parties, of course, are optional.