CHILTON — May is Mental Health Awareness Month as well as Get Caught Reading Month. What better way to honor both events than getting caught reading a book that shines the light on mental health? To make it even more meaningful, read a book written from a Catholic perspective that highlights this issue.

Helen Scieszka, Ph.D., has created a series of novels that precisely fit that bill. The books are called “Little Girl Lost, Little Girl Found.” The trilogy includes “Year One: The Journey Begins, A Story of Faith, Hope and Healing”; “Year Two: Rough Road Ahead, A Story of Seeking And Self-Discovery”; and “Year Three: Coming Home, A Healing Story of Faith, Family and Friends.” They are available at Cathedral Book & Gift in Green Bay and On This Rock Book Store in Oshkosh. 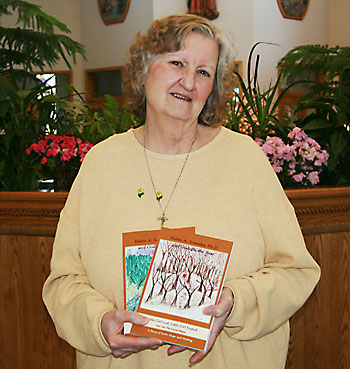 Scieszka knew since she was in seventh grade that she wanted to be a clinical psychologist but was a number of years into that profession when she started writing her books. “I was just drawn to this field. I’ve always liked people, I’ve always wanted to help people and I thought that was a way to do that.”

A native of the Midwest, Scieszka started her schooling at Michigan State University and completed her studies in southern California. She lived there until 1993, when she moved back closer to home. She taught psychology and family studies at Silver Lake College and UW-Green Bay; had a private practice; worked for six parishes in the Chilton area as pastoral associate for nine years; and served four years as director of Family and Married Life with the Diocese of Green Bay.

According to Scieszka, “Little Girl Lost, Little Girl Found” is a story of a very intelligent woman who was traumatized as a child and suppressed the memories until she was an adult. The books depict how she deals with these memories as they start to surface, the people who support her on that journey, the resources she taps into for help, and how her Catholic faith was integral in the healing process.

As a therapist, Scieszka saw many patients who dealt with similar issues. “One of the defenses when traumatic things happen to children is they suppress it and something will trigger it in adulthood. It could be anything. We see this a lot with post-traumatic stress individuals. They may seem fine but something will trigger it and suddenly they’re having anxiety attacks or they’re feeling depressed or they’re feeling suicidal, however it may manifest.”

The main character in her books represents a number of people Scieszka encountered through the years. “Because I worked as a therapist in a drug and rehab unit, I worked a lot with friends and families of alcoholics. That background information comes into the story. I also ended up working with youth all the way up to older adults who had been molested as children. This story is a conglomeration of all of them and the people that supported them. I thought their stories needed to be told because of how it affects families as well as the individual.”

It was important for Scieszka to make this a Catholic book. “What a number of therapists don’t include is the faith journey of the person. That’s a strong component. It needs to be included.”

The healing process doesn’t all happen at once, Scieszka noted. “That’s why the books are spread out over three years — so people can see it’s a progression, that you don’t just go to a counselor once; it’s a journey.”

Can people completely heal from deep emotional trauma? “As with most things in life, we never truly get over things, we learn to live with them in a healthier way,” said Scieszka. “One in six people is affected by mental health issues. It’s a silent thing. People don’t understand, they don’t see it so they think nothing is wrong with you.”

Scieszka recommends that people dealing with these issues get professional counseling.

Reading can be a form of therapy for people, the formal term is bibliotherarpy. “There’s a quote that says, ‘A library is a hospital for the mind,’ and C.S. Lewis said, ‘We read to know we are not alone.’ Therapists recommend particular fiction books to clients to help them see how other people deal with these issues. With fiction you learn empathy, you learn sympathy, you see how somebody else and their family deal with issues. You identify with the character,” said Scieszka.

“That’s why good Catholic books are so important. The greatest storyteller of all time is our Lord and he told stories to share the faith. That’s what Catholic authors are now doing,” she said. “They’re telling everyday stories from a Catholic or Christian point of view.”

Recently Scieszka has been giving talks at area Catholic parishes on Catholic fiction. She has one coming up on Thursday, June 2 at 7 p.m. at Good Shepherd Church in Chilton. “There’s a real need for good Catholic fiction to help people know more about their faith and see how our Catholic faith is a part of our everyday life.”

Scieszka’s advice for May and beyond: Reading fiction relieves stress. “Find some good Catholic fiction to read, it’s good for your mental health.”