PULASKI — When David Parker informed his eldest child, Legionary Br. David Parker, Jr., that he was pursuing the diaconate again, the son had a question for his father: “How many years do you have in formation?”

“When he said five years, I literally started counting on my hands how many years of formation I had left,” said then Br. Parker in an interview with The Compass. “I said, ‘Dad, do you realize what this that means? We are on the same path right now to be ordained.’” Bishop David Ricken lays his hands on the head of David Parker, Jr., while his father, David, looks on. Both men were ordained deacons, but David, Jr., a member of the Legionaries of Christ, will be ordained to the priesthood. (Sam Lucero | The Compass)

Their paths came together on Saturday, May 7, at Assumption of the Blessed Virgin Mary Church. David and Br. David were ordained deacons by Bishop David Ricken. In addition to Assumption of the Blessed Virgin Mary Parish, Deacon Parker will serve at St. Stanislaus Parish, Hofa Park, and St. Casimir Parish, Krakow. Deacon Parker, Jr., who studies at Pontifical Athenaeum Regina Apostolorum in Rome, is a transitional deacon who will be ordained a priest on Dec. 10 in Rome.

“This is a historic moment in our diocese,” said Bishop Ricken. “I don’t think that it’s ever happened where a father and son have been ordained deacons on the same day at the same Mass.”

The Parkers’ vocation journey dates back to 1981 when Deacon David entered the Norbertine Order. He would discover that he was not called to the priesthood or religious life.

“I met Denise the very first Sunday Mass that I was there,” he explained. “She was the telephone receptionist at the Abbey. I started visiting her and, three months later, I knew that I was destined to be with her.”

“I introduced myself to all the seminarians as they came in. I explained to them what we do and how to get their messages. I told them, ‘If you ever want to come down and say hello, feel welcome.’ That’s how we met,” said Denise. 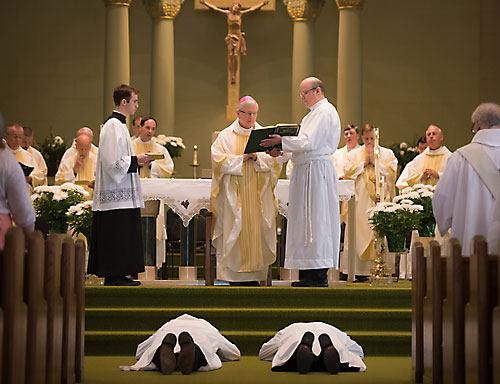 David Parker, left, and his son David, Jr., lay prostrate during the Litany of Saints, part of the rite of ordination to the diaconate. The ordination, a first for a father and son in the Diocese of Green Bay, was held May 7 at Assumption of the Blessed Virgin Mary Church in Pulaski. (Sam Lucero | The Compass)

“One of the (Norbertine) priests, at the time when I left, told Denise’s parents, ‘You took one of ours, now you have to give us one of yours,’ so we did 18 years later, but for a different order,” said Deacon Parker.

Deacon Parker, Jr., was called to the Legionaries of Christ in 2003. He was first introduced to the order at age 12. His aunt, Kitty Zeik, a Regnum Christi member, invited Legionary Fr. Juan Gabriel Guerra to give a retreat for 20 Parker cousins. In addition to participating in numerous retreats, Deacon Parker, Jr., also made trips to the Legionary minor seminary, Immaculate Heart Apostolic School in New Hampshire, and was mentored by numerous Legionaries.

Religious life was still not a clear path. Deacon Parker, Jr., who was an all-conference center in football and played rugby in high school, planned on going to college. He had decided to go to the University of Wisconsin in Madison, but “our Lord ended up giving me the strength to continue on the path to religious life,” he said.

Deacon Parker first pursued the diaconate more than 10 years ago. Deacon Parker, Jr., was in Monterrey, Mexico, at the time. His parents made the trip for his profession of first vows.

“We went down to Our Lady of Guadalupe,” explained the son. “We went to visit the shrine. Mom lost feeling in her legs. We had to grab onto her and bring her to one of the pews. Her feet were swelling all week. She didn’t know why.”

When they returned to Wisconsin, Denise discovered that she was pregnant. The Parkers had six children at the time: David, Johnathan, Adam, Rachel, Nicole and Mariah. Their seventh child, Ava, was born in May of 2006. The last two children are almost 15 years apart. Deacon Parker decided to postpone the diaconate. 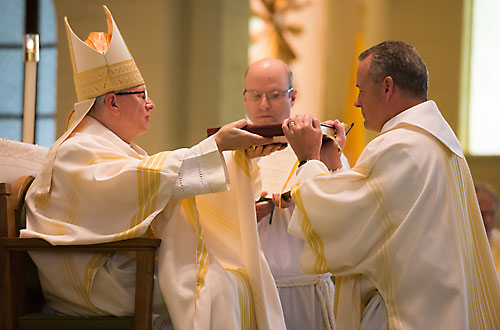 Five years later, Deacon Parker, a founding member of the Catholic men’s group Esto Vir and founder of ConQuest, a Catholic boys’ group, was encouraged to consider the diaconate by two priests and Bishop Ricken.

“We were at the 10-year anniversary for Relevant Radio,” explained Deacon Parker. “We were a little bit late showing up for the blessing because we were helping a lady who was injured. The bishop was leaving. He knew me and knew my son, David. As he drove past, he opened his window and stopped. He said, ‘Dave, I would like to see you.’ I didn’t know what he wanted to talk to me about.”

Deacon Parker, Jr., continues to study theology in Rome, where the Legionaries have a house for 300 seminarians. He speaks multiple languages, including Spanish at the house. Classes are taught in Italian. He does not know where he will serve as a deacon or priest.

“Part of the blessing of religious life is you don’t really know,” he said. “They find a place that they think will be good for you. You don’t know until you actually have that protocol letter in hand. I could be sent to another country or back to the United States.”

Sharing a vocation has strengthened the relationship between father and son, who share deep love for the Blessed Mother, he added.

“Our relationship with each other has grown to another spiritual level,” he said. “To be able to return back to my home parish, the place where I grew up, where I was an altar boy and to have (Franciscan) Fr. Patrick (Gawrylewski, pastor), who I’ve known since I was 5, be there, it couldn’t get any better.” 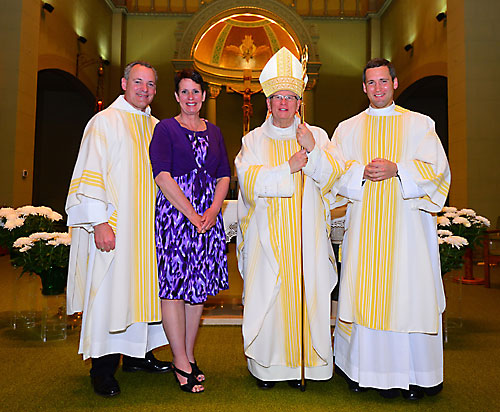 Bishop David Ricken of Green Bay is pictured with Deacon David Parker, Sr., left, his wife Denise and David Parker, Jr., following the father and son’s ordinations to the diaconate on May 7 at Assumption of the Blessed Virgin Mary Church in Pulaski. The young Parker is a member of the Legionaries of Christ and will be ordained to the priesthood in December. (Sam Lucero | The Compass)

Fr. Gawrylewski and Legionary Fr. Matthew VanSmoorenburg, one of his mentors, vested Deacon Parker, Jr. His father was vested by Denise and Norbertine Fr. Tim Shillcox, his spiritual director who entered the Norbertine order with him.

Father and son received a special blessing prior to the ordination Mass. A couple months ago in Rome, Deacon Parker, Jr., saw Pope Francis who had visited with students in a confession course.

“I asked the Holy Father for a blessing for me and my dad who will both be ordained together,” he explained. “He responded to me, ‘How beautiful,’ in Spanish.”

When he returns to Rome, Deacon Parker, Jr., is scheduled to be a deacon at the Saturday evening Pentecost Mass celebrated by Pope Francis.

Deacon Parker, who has worked as administrative director for Executive Air at Austin Straubel Airport in Green Bay for 26 years, said that he looks forward to serving the three parishes as a deacon. His past ministry experience ranges from youth ministry to outreach to seniors. He and Denise, who have served as a FOCCUS couple for marriage preparation for 20 years, provide Communion services at an assisted living center in Pulaski.

The ordination Mass was the beginning of celebrations for the Parker family. Father and son alternated serving as deacon of the word and deacon of the altar at weekend Masses. At the 10 a.m. Mass on Sunday, Johnny Parker, the eldest grandson, made his first Communion in Pulaski.

“We got permission from his pastor (Madison area),” said Deacon Parker. “It’s special. We have 15 grandchildren.”

“I owe a tremendous thank you to so many people around the diocese who have prayed for me and prayed for my dad,” said Deacon Parker, Jr. “Thanks to the Pulaski community for their inspiration to my own vocation. There is a reason why we have had three or four vocations from the community. Hopefully, I will be able to live up to what God is calling me to do.”