Fuller to serve in Keshena, Gresham and Neopit

SHAWANO — Mark Fuller, who has cared for the corporal and mental welfare of members of northeast Wisconsin’s Menominee community for better than 20 years, is looking forward to addressing native people’s spiritual needs as well.

Fuller, 55, of Sacred Heart Parish in Shawano, will be ordained a permanent deacon May 21 at St. Francis Xavier Cathedral in Green Bay. 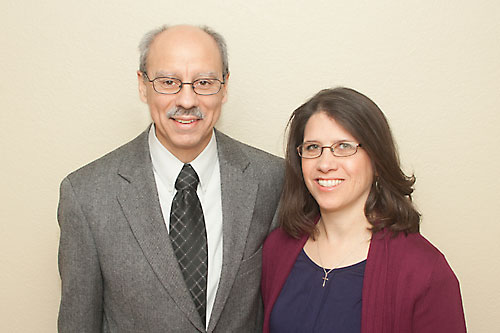 At one time a drug abuse counselor, Fuller primarily has been a mental health counselor for the Keshena-based Menominee.

“In the clinic, I’m limited in my ability to talk about faith,” he said, so ministering as a deacon will broaden how he’s able to touch the lives of others.

“There’s never been a deacon there, so we’re going into uncharted territory — for them and for us,” Fuller said. “I expect I’ll be more of a witness of the Gospel as a deacon.”

He and his wife, Patty, serve as a FOCCUS couple, and they anticipate doing marriage preparation for engaged couples together just as they have at Sacred Heart for several years.

The two met after college while volunteering in an economically depressed area of the Pennsylvania Appalachian Mountains at a mission run by an Anawin community called Young People Who Care, a group they still stay connected with.

After marrying, they decided they wanted to raise children near family, Patty said, and since she grew up in Kaukauna, they moved to Wisconsin “on faith and without jobs,” she added.

Mark Fuller began working with the Menominee community in 1994.

“God put me there, he opened that door,” he’s convinced.

“I’ve found them to a good people, a strong people,” Fuller said.

They’ve both been active in Marriage Encounter and in a variety of ministries and activities at Sacred Heart, where they can walk to church from their Shawano home.

Deacon-candidate Fuller went through a conversion experience while a student at the University of Buffalo near where he grew up in upstate New York.

“It was a time of searching,” he recalled. “I was feeling a sense of emptiness.”

Hearing Christian radio sparked the thought that “maybe God’s part of what I’m searching for,” he said, and, while reading the Gospel of John, he had the sense of God’s presence.

When he attended Mass at the Newman Center at the university, he felt led to the Catholic Church.

“To be of service and gratitude for God’s leading me to the church is the core of my calling to the diaconate,” said Fuller, “what he’s done for me, opening my eyes of faith.”

Patty said a sign of Mark’s penchant for service is the way children all over the neighborhood know they can come to the Fuller house for any needed bicycle repairs.

“Ever since our time at the mission, Mark has been faithful and disciplined in his prayer life,” she added. “Prayer is the basis of his interaction with people. That’s where he gets his strength to serve.”

Traditional prayer, the rosary and the Divine Mercy Chaplet are the prayer forms he typically uses, Mark said. “And silence. Listening to God. Reading Scripture and listening.”