GRAND CHUTE — Dan Zajicek, of St. Pius X Parish in Appleton, has always been involved in the church. When he and his wife, Diane, lived in Waukesha he was an active volunteer at their parish. Pretty much anything you could do at the church he was doing. Zajicek said his wife recalled that they first started having the conversation about him becoming a deacon at that time.

In 1996, Zajicek’s career as a physician assistant brought their family, which includes four daughters, to Appleton when he took a job at St. Elizabeth Hospital working in the heart surgery center. The thought of becoming a deacon was pushed to the back burner. 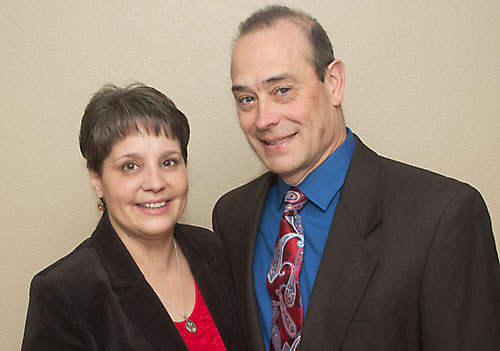 “The one thing with the diaconate is that you can’t get married once you become a deacon and with four young kids there’s no way if something happened to Diane that I could raise them alone so I put it off,” said Zajicek.

Both he and his wife have been active volunteers at St. Pius X and in the community for the last 20 years. One of their ministries actually led Zajicek to take the steps to enroll in the diaconate program.

“When they opened up the adoration chapel at St. Pius in 2003, Diane and I signed up for our hour right away,” said Zajicek. “I kept getting this feeling that I needed to do more. Deacon Rick Simon saw my service in the medical field and said, ‘You’d make a really good deacon.’ As my kids were getting older, I was thinking, ‘I guess I could do that.’ Every time I hit the adoration chapel I kept getting pushed that I needed to contribute more. I said, ‘OK, I’ll start the journey and I’ll see where it takes me.’”

Zajicek began formation six years ago when his youngest child was finishing high school. The first four years he went to classes on Monday nights and then two years ago started the weekend classes. At the same time took a position in general surgery at the hospital so he could cut back on his hours and work fewer weekends. His wife attended almost every class; some she audited and some she took for continuing education credits for her job as a teacher at St. Edward School in Mackville.

Most deacons, in addition to their standard tasks, such as helping with baptism, funerals, marriage prep, confirmation and the RCIA program, also have a ministry that is particularly important to them. Zajicek and his wife have done a lot of ministry work with young adults but his niche will be the healing ministry at St. Pius.

“Deacon Simon started the St. Pius Healing Ministry 13 years ago,” he explained. “About five years ago he put Diane and I in charge of that. I want to keep that going. I see myself doing a lot of the home visits that Deacon Simon does now.”

The overall purpose of the healing ministry is to be there for prayer with people in the parish, explained Zajicek.

“We do healing Masses, we’ve brought in different speakers and healing priests. Every Sunday between the 8:30 and 10:30 a.m. Mass, we set up in the lobby and we pray with anybody who feels they have a need, whether it’s spiritual, physical or emotional,” he said. “We’ve gone through extensive training with that.”

Currently St. Pius has about 10 volunteers in healing ministry, but they are working on recruiting more. It takes dedicated people to join this ministry.

“This isn’t a ministry that you do for four years, it’s kind of like a lifelong ministry because you’re continually growing and continually learning,” said Zajicek.

St. Pius is collaborating with St. Mary Parish in Greenville to offer healing Masses to the public on a regular basis.

“Ideally we would do one here a month and the opposite month at St. Mary’s,” said Zajicek. “We realize that we need to get more people involved because there are a lot of people in need of prayer. The more people you get involved in the ministry, the more ownership they take in the church.”

While most people at this stage of life are gearing down, things will be picking up for Zajicek. “Diane and I talked about how we were going to retire at a certain time and do certain things and now we’ve said, ‘I guess we’ve just changed our retirement.’ Diane’s very supportive, we’re both very strong in our faith and we understand people’s needs,” he said. “With the healing ministry it just kind of opens your eyes even more because you see how prevalent the devil is in this world and it’s not just a physical thing, it can be mental and spiritual and you need people who are willing to do those battles and this is the next step in those battles.”