APPLETON — Bob Seymour has long been involved in service in the church, so the diaconate program seemed to be a natural step to deepening his relationship with the church and God. He began his studies in 2011 and will be ordained in May.

Seymour, a mechanical engineer with Kimberly-Clark Corp., and his family moved to the Fox Valley in 1993 and joined St. Pius X Church. He already had a strong foundation in church service by this time. 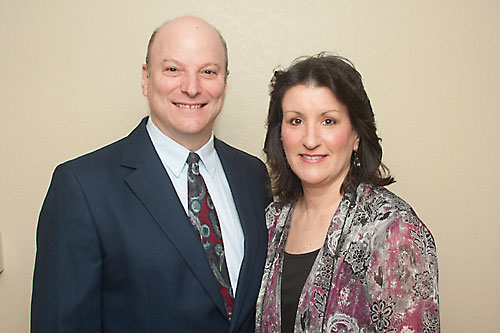 In college in California, he was active in the Newman Center. “Before that I was involved with the Campus Crusade for Christ (an interdenominational evangelical organization),” he said. “My mother said before you jump into that, learn more about your own religion. That’s when I went to the Newman Center.”

It was here that he met his wife, Dorothy. They married in 1985. Today they are the parents of Jennifer and Jonathan, and grandparents to 17-month-old John Paul. Jennifer is married to Shileng. Jonathan, an art major, just graduated from the University of Wisconsin-Stevens Point.

When the newly-married couple joined St. Paul the Apostle Church in Chino Hills, CA, Seymour began teaching faith formation and got involved in youth ministry. The Chino Hills area and its Catholic church were experiencing rapid growth. When the Seymours first joined in 1986, the church was meeting in the local junior high school. “Faith formation classes met in my house,” he said with a smile. He also got involved in other church activities, such as the picnic and fundraising for a church building. He helped start a baseball team.

“It was a fun area. Everyone was new,” he said.

In 1993, he transferred with his job to Wisconsin. At St. Pius X, he quickly got involved with the faith formation program and started going to the Bible study that was led by then-pastor Fr. Don Zuleger. He attended the Bible study for many years even after it moved along with Fr. Zuleger to St. Bernadette Parish.

“Then, someone started an adoration chapel (at St. Pius),” he said. He signed up for midnight to 1 a.m. on Saturday. That commitment continues today.

“It was one of those things I heard a priest talk about and I knew I had to do that. It really helped my prayer life.

“I’m a doer by nature,” he continued. “I like teaching, especially high school students. I love the questions they ask. I would pray to the Holy Spirit to guide me in how to respond to them.”

At the same time, he became involved with his children’s school activities, Boy Scouts, and coaching both soccer and basketball at different times.

As his daughter Jenny finished high school in 2007, his prayer at his adoration hour became, “What do you want me to do next?” The answer came from the Catholic Heart Work Camp. He made one of these trips with Jonathan and then continued to chaperone later trips as the need arose.

The work camp groups would travel to a different location around the country each year and do service projects during the day and stay at local high schools in the evening. “I talked to our youth minister (at St. Pius) and said we should get this going here,” he said.

Seymour also chaperoned students on the annual March for Life in Washington, D.C.

One of these trips in 2011 brought a conversion of sorts for him. He flew down to join the students and on the trip back sat next to Fr. Tom Farrell, now pastor at St. Pius X. “I told him I was thinking about the diaconate,” he said, and found encouragement from his pastor.

“I figured I would try it. If it wasn’t what I should be doing, God would tell me,” said Seymour.

“I have always done service – that is in my blood,” he added. “My comfort zone was not liturgy and prayer services. I like being behind the scenes and working with kids. I needed to expand my horizons.”

His first class was on leading prayer. At the end of it, he learned local clergy needed help at Brewster Village, a rehabilitation center and nursing home in Appleton.

“I had gone through diaconate classes with three other men from this area. I talked with them about it and we started rotating the prayer services,” Seymour explained. “My first one was on Jan. 1, 2012.” Today, he continues helping at Brewster Village and The Bridges of Appleton.

Seymour said there are three aspects of being a deacon: Ministry of the Word, charity and liturgy. He is comfortable as minister of the Word, he said.

“I’ve done a lot of teaching. Minister of charity — I have the Brewster Village service and have helped with meals for the Warming Shelter, the work camp and March for Life,” he explained.

“Minister of liturgy – I see why we need this. It ties the (church) community together. I’m looking forward to being part of the sacraments and liturgies.” He was able to do his mother’s funeral vigil service in California recently.

“What attracted me was the service piece,” he said. “I heard about deacons and what they did. I like connecting service to the church. Deacon Paul Grimm explained it well when he said the majority of your job is outside the church walls.

“Even when I retire, I’ll be out doing something,” said Seymour. “I’m one of those people who will retire with a hammer in his hand. I like problem-solving. I like helping people out.”