GREEN BAY — The diaconate was suggested to Bernie Terrien on a few occasions over the years, but it didn’t interest him. What changed his mind and heart? “Because he (God) asked,” said Terrien, who will serve as a deacon at St. Bernard Parish. 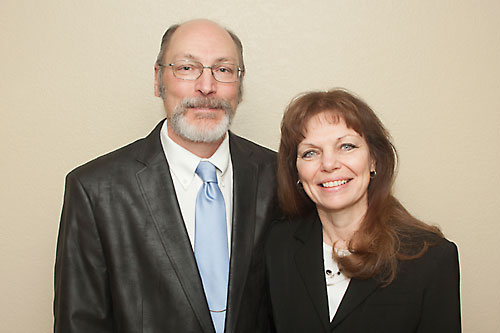 Terrien, who grew up the youngest of seven children in Green Bay, was a member of Nativity of Our Lord Parish in Ashwaubenon until 12 years ago when he married his wife, Lynn. Both are teachers at Green Bay Southwest High School.

“We joined St. Bernard because I moved to the east side,” said Bernie, a graduate of St. John’s University in Collegeville, Minn., and UW-Green Bay who has been teaching for 20-plus years.

His role as an educator expanded to include teaching adult education classes at St. Bernard. Other parish ministries include serving as a lector and extraordinary minister of holy Communion. Bernie and Lynn also lead a monthly Communion service at Age Well Center for Life Enrichment, an assisted living facility in Green Bay. They also serve at Nicolet Highlands, a senior apartment complex in De Pere where his mother, Patricia, resides.

“They needed someone to call bingo,” explained Bernie. “We call bingo over there twice a month and socialize with the people. We’ve been doing it for five years. It’s become a community-building activity that goes beyond calling bingo.”

Patricia and Eugene, his late father, provided an example of generosity. They cared for 52 foster children over several decades.

“I am the baby of the family, so I only remember the last two,” said Bernie. “That was before my time. I’m from a big family, but being the youngest, I was raised as if I were an only child. By the time I hit seventh grade, I was the only child in the house. It was quite an experience (being a foster family). My father never graduated from high school. He was a hard working common laborer. He worked at the mill to take care of his own family of seven (children) plus all these other children.”

His parents, who were involved in the church, also hosted several exchange students.

“I’m still my mom’s baby,” said Bernie. “She is looking forward to seeing me be ordained.”

Previous service experience is needed to become a deacon candidate. Bernie forgot to mention his personal ministry when inquiring about formation.

“He didn’t even bring up that we had gone to Nicaragua,” said Lynn. “We were working amongst the poor. I really think that work, being around people who are so poor and so happy, really gave us a whole new perspective.”

Bernie and Lynn will be traveling to Nicaragua for the seventh time this summer to do missionary work for Amigos for Christ. They work on water projects, including digging ditches with Nicaraguans. They stay at the Amigos for Christ complex in Chinandega and travel anywhere from 30 minutes to three hours to the work site. Members of St. Bernard and St. Agnes Parish of Green Bay will be part of this year’s mission trip.

In 2011, the couple started the Rosary Run, an annual motorcycle ride to raise funds for Amigos for Christ. The 2016 run on June 18 will begin at St. Bernard Church, include rosary prayer stops at holy sites and finish at the Shrine of Our Lady of Good Help in Champion. For more information, visit www.rosary run.org.

Bernie, who has been riding a motorcycle since 1983, said that in the past six years, the ride has raised enough money for more than a half a mile of pipe for Amigos for Christ. Lynn plans the route and food. Bernie is thankful for her support. She attended formation classes with him.

“She was very supportive from the very beginning,” he said. “We want to keep a healthy balance between ministry, family and work.”

Their family includes Lynn’s daughter, Alyson Filipa and her husband, Jon, who live in Cincinnati. They have three young daughters: Annie, Kate and Claire. Lynn also has a son, Tommy Hudock, who lives with his wife, Becky, in Minneapolis. All will be attending the ordination Mass.

Bernie, a member of the lay Dominicans for the past 10 years, will continue to put his trust in God in his ministry as a deacon.

“I have one goal and that is to walk alongside my fellow disciples and assist them in whatever way God chooses,” he said, “to draw closer to Jesus while allowing them to help me.”