GREEN BAY — Tom Mayhew spins the rear tire of a bicycle secured firmly on a repair rack. The rotations cause a grinding noise. Mayhew, tools in hand, examines the derailleur and makes a slight adjustment. The next tire spin is smooth and steady. The bicycle is ready for the road; ready to provide a means of travel and more independence to a homeless person in the city. 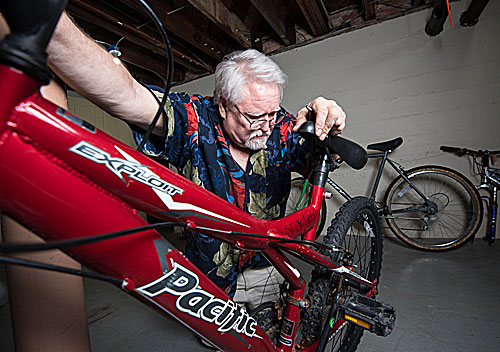 Tom Mayhew tests the brakes on a bicycle. Mayhew, a retired dentist, was homeless and turned to the shelter after his practice went bankrupt. Now back on his feet, he says repairing bikes is a way for him to give back to the shelter. (Sam Lucero | The Compass)

Spokes 4 Hope, a bicycle repair program in cooperation with St. John the Evangelist Homeless Shelter, is back in service. The program, which opened in the St. John the Evangelist Church rectory garage last September, was shut down during the winter months and has since reopened in a space in the rectory basement. Spokes 4 Hope grew out of a conversation between Tony Pichler and Paula Rieder, members of the ministry team at the homeless shelter.

“Many times, for people on the streets, bikes are their primary mode of transportation. A year and a half ago, we were talking about how many bikes were sitting in the racks here at St. John’s in disrepair,” said Pichler, co-director of the Norbertine Center for Spirituality in De Pere. “What would it take to get a bike repair program started? How can we get those bikes back in good repair and give people back the mobility that they need?”

The program got off to a good start, in part through a generous donation. 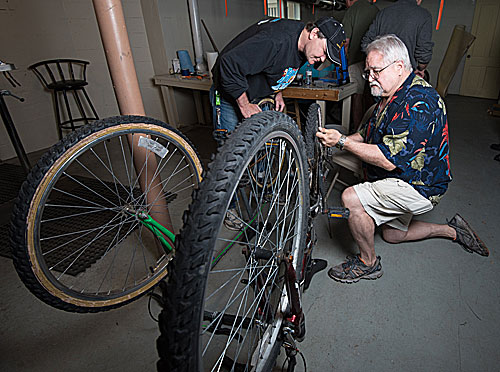 “I met a woman named Donna Marie. I don’t even know her last name,” explained Rieder, coordinator of pastoral ministry at St. Raphael the Archangel Parish in Oshkosh. “She said, ‘I have some bikes, can you use them?’ … She volunteered at EAA (AirVenture in Oshkosh). They told her that she could have the bikes, so she was storing them.”

Pichler met Mayhew at the shelter and found a lead bicycle mechanic. Mayhew grew up in Allouez fixing bikes in the family garage.

“I remember Tom telling me, ‘The bike I’m riding now is a combination of three bikes I put together,’” said Pichler. “We’ve had at least four or five guys who have been helped by the shelter who have been our mechanics.”

Mayhew, a second generation dentist, fell on hard times. He practiced in Green Bay before semi-retiring and moving to Door County. His practice took a number of Medicaid patients which contributed to the downfall of the business, he said. 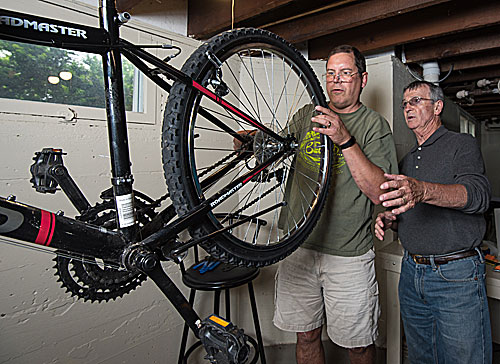 Tony Pichler and Mike Dockry, members of the homeless shelter’s ministry team, replace the rear tire on a bicycle. (Sam Lucero | The Compass)

“When the practice went under, the bankruptcy court took everything,” said Mayhew. “I was at the shelter for a while trying to regroup. That’s why I am such a big supporter of the shelter. It was a great place to live with a very supportive staff. Now I can go in and help counsel people during meals.”

Repairing bicycles is another way to give back.

“This gets me out of the house,” said Mayhew. “Now, I fix a lot of the bikes (models) I once owned. I ride between five and 10 miles a day. With the practice going under, I cannot afford a car.”

Brakes and tires are the most common repairs followed by derailleurs, seats and kickstands.

“We lube everything,” said Pichler. “It’s hard on a bike when it’s sits out in the rain or sits out all winter.”

The Norbertines provided a grant for the program, which was used to purchase equipment. Rebecca Cleveland and David Dekeyser, owners of The Bike Hub in De Pere have served as valuable resources, including ordering tools and the work stand.

When the program began, Spokes 4 Hope distributed the bicycles. Now, the case managers at the shelter work with guests who need bikes. Recipients are responsible for getting a bicycle license from the city.

Mike Dockry, a member of the shelter ministry team who is also on the board of trustees, assists the program. Bicycles improve the quality of life for many of the shelter guests, he said.

“It’s one thing to be homeless,” he said, “but then another issue when you find a job and have to figure out how to get there. What happens when the bus doesn’t run at that time? It gives them a lot more independence. Jobs are so important for self-worth and make them feel much better about themselves.”

“I was going to the New Community Shelter to drop something off. We had fixed this guy’s bike and I remembered his face,” said Pichler. “There he was riding near the corner of Walnut and Broadway and he had a nice grin. This guy was so happy to have regained his mobility. He had his bike to help him get around town. That’s what this is all about.”

Monetary donations, used for tubes and tires, and bicycle donations are accepted through St. John the Evangelist Homeless Shelter. Contact the shelter at (920) 436-9344 or visit www.stjohnhomelessshelter.org.

UPDate: Spokes 4 hope on the move

Tony Pichler, a member of the ministry team at St. John the Evangelist Homeless Shelter, said that to ensure that the Spokes 4 Hope bicycle repair program has a long-term home, in upcoming weeks, operations will transition to Broken Spoke Bike Studio, 115 Pine St., Suite 101, Green Bay. Broken Spoke owner George Kapitz has offered to house and serve the program as a means to give to the community.