DE PERE — The rumble and cracking of thunder outside the walls of St. Norbert Abbey Church offered stark contrast to the silence inside the darkly lit church, where nearly 100 people gathered for an evening “Candlelight Vigil for Healing and Peace.” 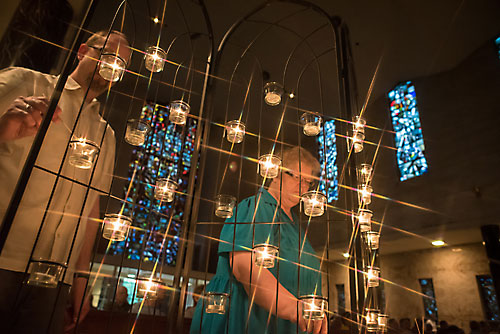 Jamie Whalen, left, director of lay ministry formation for the Diocese of Green Bay, and Susan Perrault pastoral associate for faith formation St. Norbert College Parish in De Pere, light candles during a candlelight vigil for healing and peace June 15 at St. Norbert Abbey Church in De Pere. The hour-long service, sponsored by St. Norbert Abbey and the Norbertine Center for Spirituality, was in remembrance of those killed in the mass shooting June 12 in Orlando, Fla., the worst such shooting in U.S. history. A lens filter was used to create the cross effects in the photo. (Sam Lucero | The Compass)

The solemn gathering, sponsored by the Norbertine Community of St. Norbert Abbey and the Norbertine Center for Spirituality, was held June 15 to mourn the lives of 50 people who were killed in the Orlando nightclub shooting rampage June 12.

The hour-long ecumenical service included prayer, a Scripture reading, a song performed by the abbey singers and musicians, a silent reflection, lighting of candles and a tolling of bells.

As Green Bay flutist Keith McGillivray performed a poignant arrangement he composed on a Native American flute, guests were invited to the church sanctuary steps, where three candle displays were stationed, and light a candle in remembrance of the Orlando shooting victims. A grandmother and her grandson light candles during a candlelight vigil for healing and peace June 15 at St. Norbert Abbey Church in De Pere. (Sam Lucero | The Compass)

Following the candle-lighting service, a bowl with burning incense was placed on the church’s altar, symbolizing the prayers of those in attendance rising to heaven. Bells in the abbey’s bell tower began tolling, once for each of the shooting victims.

Attendees said afterward that the service was uplifting.

“When the rain came, I felt like God was weeping,” said Jayne Stefanic. “A beautiful, contemplative time of sadness, solidarity, hope (and) silence,” added Norbertine Fr. Tim Shillcox. “Along with what was arranged, the rumble of thunder and falling rain were gracious.”