At 98, Hazel DeKeyser continues to support her parish by donating Belgian pies

Whichever pie it is, two things are certain: the fruity pastry is as authentically Belgian as the loving hands that baked it and — as long as those hands can form the yeast and flour pie crusts — it won’t be the last Belgian pie DeKeyser makes. 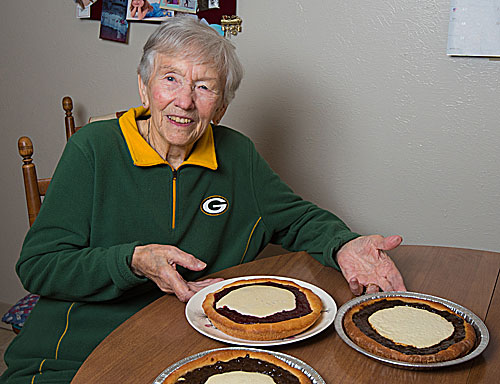 Born and raised in Kewaunee County, the seventh of nine children, DeKeyser said she and her four sisters grew up making pies. As a child, she attended grade school in Duvall and her parents, Eli and Mary Delaruelle, were active members of St. Francis de Paul Parish in Duvall. “We had to walk a mile and a half to get to church,” she said.

DeKeyser said she took a few rug-weaving classes at vocational schools, but most of her life has been spent housekeeping and, of course, baking pies. She moved to Green Bay when she was 23 to work as a housekeeper. “I lived with the people where I worked,” she said.

After moving to Green Bay in 1941, DeKeyser enrolled at SS. Peter and Paul Parish. While attending a kermis (a traditional Belgian festival of celebrating the harvest) in Dyckesville, the former Hazel Delaruelle met her future husband, Lawrence, who was a Green Bay fireman. They were married in 1943 at SS. Peter and Paul Church and later had two boys, Lawrence, Jr., and Darrel. She now has five grandchildren and seven great-grandchildren. Lawrence passed away in 1990.

In the mid-1980s, when Fr. Earl Schuh was pastor of SS. Peter and Paul, DeKeyser was asked to make Belgian pies for the parish picnic. Not just a few pies. One hundred pies. She would begin the baking process on Friday in order to have pies ready for the Sunday picnic.

Known to many at the parish as “the pie lady,” DeKeyser has also baked Belgian pies for other church festivals.

“A year or so ago, the Knights of Columbus from St. Matthew’s (in Allouez) ordered 50 pies a week before Easter,” she said. “On Easter Monday, they asked if they could order another 50 pies.”

When she isn’t baking pies, DeKeyser enjoys quilting and weaving rag rugs, a hobby she picked up in 1955. For many years, she donated rugs to the Annunciation Parish Mission Society.

DeKeyser said her faith has always been an important part of her life. “That’s my duty and that’s the way I’ve always felt about it,” she said.

Her belief in God and eternal life were comforting when her husband died of a heart attack about six months after they moved into her present home, said DeKeyser.

In addition to attending Mass each Saturday evening, DeKeyser spends one hour every Thursday at the parish’s perpetual adoration chapel praying before the Blessed Sacrament. It’s a practice she’s followed, with only a few interruptions, since shortly after adoration began there in 1999.

Why, at age 98, does DeKeyser continue to bake pies? “Because people like them and I don’t mind making them,” she said. “I enjoy doing all of that stuff. I can’t sit still.”

DeKeyser said she plans to continue donating pies to her parish festival, “for a couple of years anyway. I want to live to be 100. After that, I don’t care.”