NEW DENMARK — To this day, some Bohemians at Holy Trinity still greet fellow parishioners with the saying, “Jak se Maj!” (How are you?)

Time-honored traditions like that at Holy Trinity — affectionately known as that “Little Bohemian Church” — take center stage this year as the parish celebrates its 150th anniversary. 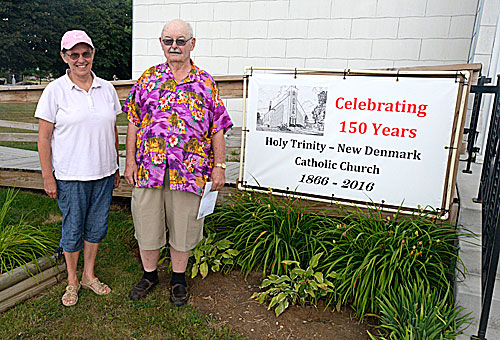 Cindy Thompson, left, and Rudy Kolarik, longtime members of Holy Trinity Parish in New Denmark, stand next to a sign outside of the church announcing the parish’s sesquicentennial. Bishop David Ricken will join the parish for their anniversary Mass on Sept. 11. (Benjamin Wideman | For The Compass)

“We’re not the biggest church, but we do have a lot of history here at Holy Trinity and we’re very proud of it,” said Cindy Thompson, whose family roots are among the oldest at the parish. “This church means a lot to so many of us.”

In honor of its 150th anniversary, Holy Trinity (a mission church of All Saints Church in Denmark and part of the Circle of Faith Catholic Community) is holding a special sesquicentennial Mass on Sunday, Sept. 11. Holy Trinity Church is located near the intersection of County Highway NN and Church Road in New Denmark, just west of Denmark.

The 10 a.m. Sept. 11 Mass will be celebrated by Bishop David Ricken, joined by Fr. Kevin Ori, pastor. After the Mass, a local band, CRS, will provide musical entertainment, and food and beverages will be available.

Many of the parish’s 68 families are expected to take part in the day’s events. Among them is Rudy Kolarik, who was baptized at the church several decades ago and now serves as the treasurer of the parish’s cemetery association.

“I’ll be here, sitting right over there, as usual,” said Kolarik, pointing to a side pew he has called home for as long as he can remember. “I’m one of the Bohemians who have been coming here for practically forever.”

Fr. Ori said that he expects people from all the parishes in the Circle of Faith to attend the Sept. 11 celebration.

“These communities like to party,” he said, with a chuckle. “They like to go and have a good time.”

The priest added that the New Denmark community “might be small, but they are vibrant.”

He said that “they come together as one, a very united group. There may be only two or three people (with a specific project), but they get it done.

The priest said that the parish’s vibrancy is visible in both its support of All Saints School in Denmakr and in its choir. That choice, which consists of members from both New Denmark and Stark/Glenmore, sing at the Saturday Masses at both churches regularly on alternating weekends.

“They have the best choir,” Fr. Ori said.

The land on which the church now stands was bought from Franz Kozlovsky in 1866 for $30. Charter family names include Kozlovsky, Nepomac, Wanek, Pociepicky, Hanek, Tuma, Pelishek, Shochpol and Kapinos.

The parish’s first church structure was built from hemlock logs and measured 24 feet by 36 feet, complete with pine shingles. The main altar, made of white pine, was crafted by a local carpenter, and each family either made its own pew or had them made. Fr. Gideon Mazanek, who encouraged the construction of the church, presided over the first Mass.

For various reasons, the church was neglected over the several decades and Masses were no longer celebrated there. That changed in 1897, when Fr. Max Oswald, pastor of St. Mary in nearby Glenmore, noticed the church’s condition. He promised to offer Mass twice monthly if congregation members rebuilt the church.

In 1898, the log building was taken down and rebuilt. Fr. Oswald had pews and altars installed, and the church was alive again.

In 1939, during Fr. John Gehl’s tenure, the church was remodeled and enlarged at a total cost of $8,996. A main altar, two sacristies and the side pew areas were added. The basement was excavated for use as a meeting hall and dining room, and new heating equipment was installed.

Stained glass windows were installed at $100 per window. They were paid for through honorariums from the parish for $50 per side — they still have the donating names on them.

The rebuilt church was dedicated on Nov. 14, 1939, with Bishop Paul Rhode presiding.

Not long thereafter, in May 1944, the parish welcomed Fr. Chester Dionne as pastor – a role he would maintain until his retirement in January 1971. During Fr. Dionne’s time, many improvements were made. The church interior was redecorated, a new altar was installed, carpeting was laid, and a new Conn organ was purchased. Also, perpetual care of cemetery graves and lots was initiated, and the cemetery grounds were expanded in 1955.

In 2000, with Msgr. Gulig’s retirement, Holy Trinity, All Saints Parish in Denmark and St. James Parish in Cooperstown entered a linked parish arrangement with Fr. Colombo as pastor. Today, the parish is linked with Denmark, Cooperstown, St. Joseph, Kellnersville, and St. Mary Parish in Glenmore/Stark in what is known as the Circle of Faith.

Today, Masses are celebrated at Holy Trinity on the second and fourth Saturdays of each month at 6 p.m.

Patricia Kasten contributed to this story.