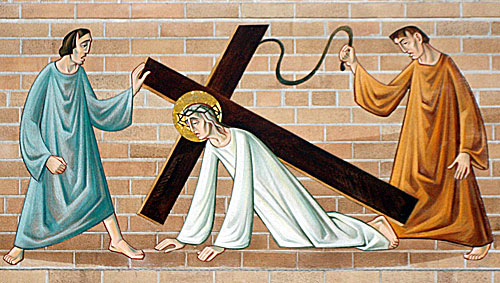 The seventh station at St. John the Evangelist Church in Antigo is titled: Jesus falls a second time. (Lisa Haefs | For The Compass)

Ground breaking for the present St. John the Evangelist Church was held in the fall of 1955, the cornerstone was laid on Sept. 30, 1956, and first services were held in this facility on May 26, 1957. The church was dedicated on Sept. 1, 1957, by Bishop Stanislaus V. Bona, seventh bishop of the Diocese of Green Bay.

Conrad Schmitt Studios Inc. received the contract for the windows, stations and some marble work. The stations are the original work of Peter Recker, an independent artist who worked with Conrad Schmitt Studios. Recker completed the entire project — from the drawing of the designs, preparing the plywood, painting and installation. The eighth station at St. John the Evangelist Church in Antigo is titled: Jesus meets the women at Jerusalem. (Lisa Haefs | For The Compass)

In a letter to Fr. Leo Binder, Recker assured him that “not one of the images is a copy of other work.” In another letter from Bernard Gruenke of Conrad Schmitt Studios to Fr. Binder, Gruenke states, “It is possible that these stations could become nationally known, if they could be published in a … Station Booklet.”

Our church can be toured via a self-guided tour booklet available in the church. It will provide an opportunity to see all the Stations of the Cross, plus other areas of interest in our church.

Lenten series: Stations of the Cross

Introduction: The Stations of the Cross: A thoroughly Catholic devotion

Part 1: Stations of the Cross: A look at seven parish stations

Part 3: Stations donated by father in honor of his 14 children

Part 5: Tapestries serve as Stations of the Cross at Holy Cross Church in Bay Settlement