Editor’s note: Part three of our seven-part Lenten series on the Stations of the Cross features the stations inside St. Francis Church in Hollandtown (one of two worship sites of St. Katharine Drexel Parish in Kaukauna). Carol Cappaert nominated the stations at St. Francis and provided the following information. 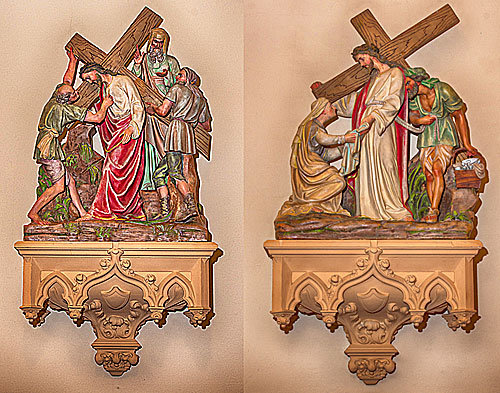 St. Francis Church in Hollandtown was built in 1848 by settlers from Holland who were brought to Wisconsin by Fr. Theodore Vanden Broek and Fr. Adriannus Godthardt. Five years later, they built a better church called St. Francis Seraph in honor of St. Francis of Assisi, head of the Order of St. Francis, to which Fr. Godthardt belonged. The parish grew and a larger church was built. In June 1899 the church was struck by lightning and burned down. In less than a year, construction on a new church was started under Fr. Cajetan De Louw.

The last survivor of these early pioneers was Nicholas Vanden Berg, my great-great-great grandfather, who lived to the ripe old age of 91. He was born at Cuyk, Netherlands, Feb. 8, 1835, and died Nov. 8, 1924. Several years before his death, he donated a set of stations, his last gift, that now adorns St. Francis Church, a lasting tribute to his memory. My 88-year-old mother, Dorothy Biese, said her mother told her that Nicholas had 14 children and donated all 14 stations for them.

The Stations of the Cross are three-dimensional, made of plaster and painted by an unknown artist.

Lenten series: Stations of the Cross

Introduction: The Stations of the Cross: A thoroughly Catholic devotion

Part 1: Stations of the Cross: A look at seven parish stations

Part 3: Stations donated by father in honor of his 14 children

Part 5: Tapestries serve as Stations of the Cross at Holy Cross Church in Bay Settlement