TWO RIVERS — Mydasia Zipperer enjoys drawing all kinds of things, especially flowers. But the 11-year-old holds a special place in her heart when it comes to religious art.

“Drawings like that are powerful in what they represent,” she said. “I like how important they are.” 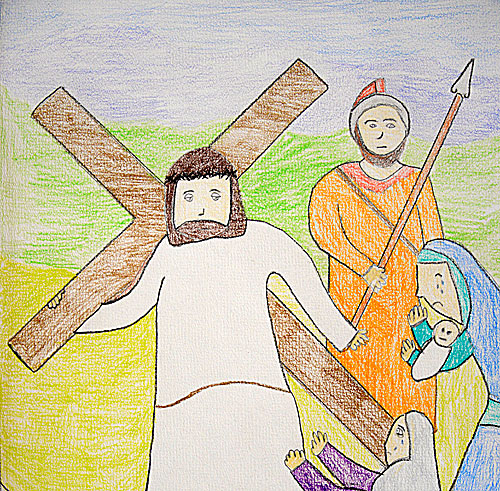 Fifteen children from St. Peter the Fisherman Parish in Two Rivers illustrated the 14 Stations of the Cross for Lent. Above, the eighth station, Jesus meets the women of Jerusalem, was drawn by Marissa Rick. The parish held an artists’ reception on March 5. The stations will be on display at the church until Good Friday. (Benjamin Wideman | For The Compass)

Mydasia is one of 15 young parishioners at St. Peter the Fisherman Parish who utilized their artistic talents for the Children’s Stations of the Cross exhibit. Each child (two brothers worked together on one station) drew a different station using pencils, markers, colored pencils, pastels or mixed media.

The creative drawings, each of which are framed with matting, went on display Ash Wednesday in the interior gathering space just outside the main church doors. An artists’ reception was held at the conclusion of the morning Mass on March 5, and the works will remain up through Good Friday.

Sheila Bialek, ministries coordinator at St. Peter the Fisherman, said students from the parish were offered the opportunity in January to create Stations of the Cross.

“As the work was handed in, I was able to see the love and effort they put in and hear their thoughts about their work depicting the last moments of Jesus’ life,” said Bialek, a former art teacher who serves as the event organizer. “The works are definitely from a child’s perspective. Upon seeing their enthusiasm, we saw the importance of sharing their perspective with our parish family.”

St. Peter the Fisherman hosted similar events the previous two years, but they spotlighted the work of parish adults. This year, children between the ages of 5 and 14 volunteered their talents. 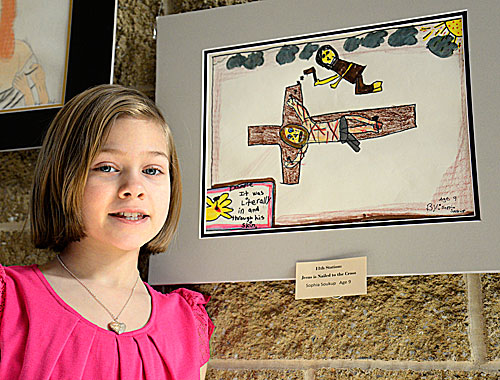 A young artist stands in front of the 11th station that she drew, showing Jesus nailed to the cross. Fifteen children teamed up to draw the 14 stations, which are now on exhibit at the Two Rivers church. (Benjamin Wideman | For The Compass)

Mydasia chose to portray the 14th station, “Jesus is Laid in the Tomb.” She spent about four hours over three days coming up with the work, in part from her own interpretation.

“I like that this station is a start to how he rose,” she said, noting she was a little nervous to have so many people looking at her creation. “It was challenging, but I think it turned out OK.”

She wasn’t the only young artist who was nervous about showcasing her work.

“I think it represents the church and shows the importance of my care for the church,” Lily said. “I like that station, because I think it was nice that Simon helped Jesus.”

“I think it turned out great,” Eli said. “I’ve gotten a lot of positive comments about it. People say, ‘Nice job’ or ‘Great drawing’ or ‘You’re an artist just like your mom.’ I love doing art.

“Part of the drawing is based on a picture I saw, and part of it is me expanding on that with my own ideas for the station. I just tried my best on it,” he added.

Sheila said she’s very impressed with all of the stations, noting, “The children have really stepped up and their efforts show it.”