Crucifixion and the death penalty

This weekend we observe Palm Sunday and Jesus’ triumphant entrance into Jerusalem. Of course, it was short-lived, as his betrayers would soon scheme against him and hand him over to Pontius Pilate. Condemned to death, Jesus is led to Calvary, where he is nailed to the cross. 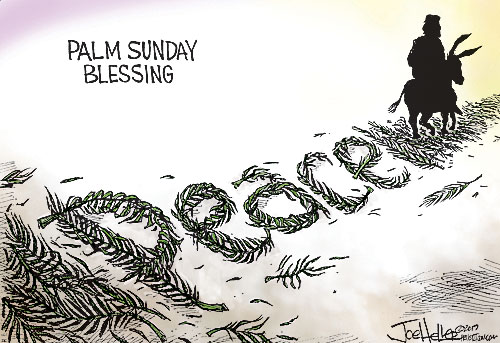 Jesus’ death sentence is a story of ironies. We believe that through his Passion, death and resurrection, Jesus forgave our sins and opened to us the kingdom of heaven and that same eternal life. Yet his life and public ministry on earth were marked by mercy, charity and love. Retribution, violence and vengeance were not part of his teachings.

Christ’s execution, his death on the cross, comes to mind as the state of Arkansas prepares to execute eight men on death row. The state plans to carry out two executions per day sometime between April 17 and April 27 — an unprecedented act, at least in modern times, of state-sponsored death. Arkansas hasn’t executed an inmate since 2005.

What makes this story even more astonishing is the rationale for these mass executions. According to news reports, the state’s supply of midazolam, one of the three drugs used in Arkansas’ lethal injection protocol, is set to expire at the end of April. Arkansas Gov. Asa Hutchinson specifically scheduled the eight executions to occur before the drug’s expiration date.

In a letter to Gov. Hutchinson dated March 1, Bishop Anthony Taylor of the Diocese of Little Rock, Ark.,  asked the governor to halt the executions and commute the eight men to life without parole.

Upholding the dignity of every human life is the obligation of all Christians. Not only do state-sponsored executions violate this precept, they remove any possibility of an inmate’s rehabilitation.

In his 2016 book, “Executing Grace: How the Death Penalty Killed Jesus and Why It’s Killing Us,” author and evangelical leader Shane Claiborne examines the parallels between Jesus’ crucifixion and today’s death penalty.

“Jesus said things like, ‘Blessed are the merciful for they will be shown mercy’ and ‘Inasmuch as you forgive, you will be forgiven,’” Claiborne told Religious News Service. “It becomes impossible to justify the death penalty with Jesus.”

Criminals, including murderers, are capable of remorse, said Claiborne, and the Bible proves it.

“The Bible is full of messed up people, even people who have committed terrible crimes like murder,” he said, citing St. Paul as an example. “If we believe murderers are beyond redemption, then we can rip out half the Bible. Jesus comes in the middle of this story to expose the violence and evil we are all capable of, and triumphing over it in love, forgiving even those who kill him.”

As we wave our palms at Mass this weekend and repeat the words Jesus heard, “Hosanna in the highest,” let’s also remember what’s in store for Jesus on Good Friday. His crucifixion was part of God’s plan, but modern-day executions are not.

Capital punishment, said Rev. Martin Luther King, Jr., “is society’s final assertion that we will not forgive.” May Holy Week be a time for all of us to reflect on this message and pray that restorative justice (which focuses on the rehabilitation of offenders through reconciliation), not retribution, be the hallmark of our correctional system.