‘What a great joy to hear about Blessed Solanus Casey,’ adds Bishop Ricken

APPLETON — Capuchin Fr. Solanus Casey’s sainthood cause took another step forward when Pope Francis announced that the Wisconsin native would be declared “blessed,” the last step before sainthood. No date was given for Blessed Casey’s beatification.

News of the beatification was greeted with joy at St. Joseph Parish, where the Capuchin priest celebrated his first Mass on July 31, 1904. 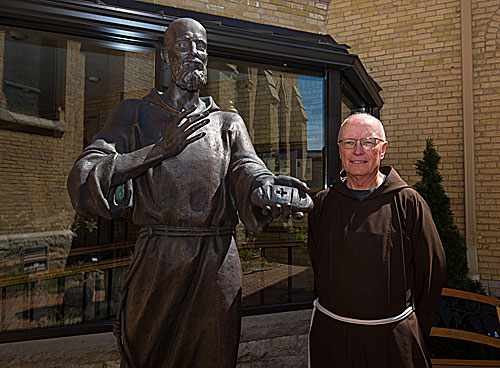 Capuchin Fr. Jim Leary, pastor of St. Joseph Parish in Appleton, stands next to a bronze sculpture of Solanus Casey, the Capuchin priest who was declared blessed by Pope Francis on May 4. The statue is the focal point of the Solanus Casey Prayer Garden located next to St. Joseph Church. (Sam Lucero | The Compass)

“We are celebrating our 150th anniversary this year,” said Capuchin Fr. Jim Leary, pastor. “If this (beatification) happens this year, what a great kind of climax to our jubilee year.”

Although he spent his last years in Detroit, Fr. Solanus has deep ties to Wisconsin.

He was ordained at St. Francis Church, Milwaukee, in the Archdiocese of Milwaukee, and celebrated his first Mass at St. Joseph Church in Appleton, Diocese of Green Bay.

Fr. Leary said Fr. Casey probably chose St. Joseph Church for his first Mass because the Appleton church was under direction of the Capuchin friars. “His family was from the Prescott area and this was probably the closest Capuchin residence for his family, so he had it here,” said Fr. Leary. “That’s our claim to fame.”

Bishop David Ricken, who celebrated Mass with the Capuchins on the parish’s 150th anniversary March 19, was also elated to hear about Solanus Casey, whose first assignment after ordination was to serve as porter, or doorkeeper, at Sacred Heart Monastery in Yonkers, N.Y.

“What a great joy to hear about Blessed Solanus Casey,” he said. “Some of the greatest work of the Gospel has been done by brother and sister porters in religious communities. Solanus was a man of great faith and service to Jesus. What a blessing he was from here and celebrated his first Mass at St. Joe’s in Appleton.”

Capuchin Fr. Mike Crosby, who is currently residing at St. Fidelis Friary in Appleton, served as “collaborator to the relator” for the canonization of Fr. Casey. “I wrote the material that constituted the main part of the positio (collection of documents used to declare a person venerable) that was accepted by Pope John Paul II” in 1995, he told The Compass.

The positio consisted of three volumes. “The first was collected testimony from people who knew him,” said Fr. Crosby. “I took that testimony and wrote his biography and the outline of how he practiced heroic virtue.” It took about two years for Fr. Crosby to complete the project.

Fr. Crosby said news about Fr. Casey’s upcoming beatification, which he said would take place in Detroit, was “like a verification of the belief that he was a very holy man.”

“Now that the pope has articulated this, it’s for the whole church to realize what kind of a model (Fr. Casey) can be for faith and mercy in the church,” added Fr. Crosby.

Fr. Casey’s love for the poor is well documented. When he was assigned to St. Bonaventure Monastery in Detroit in 1924, he helped start a soup kitchen at the monastery in 1929. His example of service to the needy was an inspiration to St. Joseph Parish, which has helped establish several community programs for the poor, including St. Joseph Food Pantry.

To honor the Capuchin priest, St. Joseph Parish created a Solanus Casey Prayer Garden in a space between the church and the parish offices. The garden’s focal point is a bronze statue of Fr. Casey created by Russian sculptor Sergei Metrofanov.

“About 10 years ago, the previous pastor, (Capuchin) Fr. Larry Abler, wanted to devote this space to Solanus in kind of memory of his first Mass being here,” said Fr. Leary. He said the statue of Fr. Casey is unusual.

“There’s not a lot of images of Solanus at this young age and, of course, it captures one of the great things that he did and that was feeding the poor,” added Fr. Leary.

According to a brochure at the parish, the statue depicts a young Fr. Casey at about the age he celebrated his first Mass.

“One hand is extended, offering a loaf of bread,” states the brochure. “The other hand is raised in blessing. The gesture has dual relevance. First, to Solanus Casey’s ministry of feeding the poor in the streets of Detroit. Second, to his gift for feeding people spiritually, offering Mass, and quietly listening to people and praying over them.”

The garden also includes a variety of flowers mentioned in the Bible, as well as memorial bricks that pave the walking path.