Hornacek said that his conversion continues

ALLOUEZ — Robert Hornacek regularly asks questions as a reporter for WLUK FOX 11 News, but it was a question asked of him that led to his faith journey and, eventually, the diaconate. Bob Hornacek was ordained a deacon by Bishop David Ricken on Saturday, May 13, at St. Francis Xavier Cathedral. He will serve his home parish, St. Matthew in Allouez. 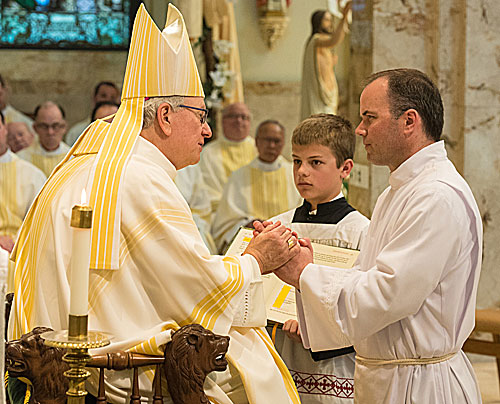 Bishop David Ricken clasps Robert Hornacek’s hands, as he questions the diaconal candidate about whether he promises to obey the bishop and his successors. Hornacek was one of five men ordained to the diaconate May 13. (Sam Lucero | The Compass)

Deacon Hornacek grew up in the Milwaukee area. He was baptized Lutheran, but his family did not regularly practice their faith.

“I remember for a short period of time our family went to church, an evangelical Christian church,” he said. “I remember listening to the Packer games on the radio on the way home. That’s it. Faith was just not a big part of our life. My grandma was in Oshkosh. She was Lutheran, so on Christmas and Easter the family would sometimes go to church. Family was important, but the faith component wasn’t really there.”

While attending UW-Milwaukee, Deacon Hornacek met his wife, Jennifer, a student at Marquette University and a Catholic.

“I remember thinking, ‘Oh, you’re Catholic, I really don’t know what that entails,’” he said. “Fast forward a couple years, we got married at her home church in Bloomer (Wis.). I was just out of college. I never considered myself atheist. I thought it was a little presumptive to say there was no God.”

In 1999, the couple moved to Green Bay, where they planned on staying for two years before moving to a bigger city. When Jennifer became pregnant with their first child, they reconsidered their plan to move. They felt that Green Bay was a nice place to raise a family, so they bought a home.

“We had an inspector come by (the house),” explained Deacon Hornacek. “He said that people really like this neighborhood because of the school. ‘What school?’ ‘The one at the church.’ It was two blocks away from (St. Matthew). God’s ways are not our ways.”

He still did not have much of a faith life, but wanted to raise his children Catholic because of Jennifer’s faith. When Hornacek visited the parish office to register to have his son baptized, he met Kay Schumacher, pastoral associate at the time. When she discovered that he was not Catholic, she asked if he would like to learn more about the faith.

“That one question changed the course of my life,” said Deacon Hornacek. “At the time, the answer was no, but she was so nice, I couldn’t tell her that.”

Invitations to join faith groups followed, but Deacon Hornacek made excuses. He finally agreed to join a group of men who met on their lunch hour.

“That was the first step,” he said. “That’s when I started to realize that the Catholic Church is not what a lot of people think it is. I started to see the history, the beauty, the depth, quite frankly how reasonable it is.

“When I started to learn more, I was drawn to it,” he added. “My big question was always the Bible. Who says that’s what it means? By what authority?”

Deacon Hornacek was confirmed on Pentecost in 2003, but said that his conversion continues.

Challenges in their marriage in 2005-2006 led the couple to become involved in the Retrouvaille program, which they remain active in today.

Deacon Hornacek dove into the faith by listening to CDs and reading books and articles to learn more about the Eucharist.

He also started spending time at the adoration chapel at SS. Peter and Paul Church in Green Bay and attending daily Mass at St. Francis Xavier Cathedral, around the time Jennifer was diagnosed with breast cancer in 2008.

“In that huge church with two dozen people, sometimes with no music, I started to fall in love with the Mass,” he said. “I really started to understand what the Eucharist was all about.”

In 2009, Deacon Hornacek realized “God, you’ve got me.” His faith was strong and Jennifer was healthy. He thought about the diaconate, but dismissed it.

“There was a litany of reasons this was not going to happen,” he said. “I pushed it off to the side. The harder I pushed it away, the more somebody would come up to me and say, ‘Did you ever think about becoming a deacon?’”

A talk by Bishop David Ricken at an Esto Vir men’s gathering, convinced him to pursue the diaconate.

“I remember him saying, and I swear he was looking right at me, ‘If God has put something on your heart and you’ve discerned it, do it. You owe it to him and you owe it to his people,’” explained Deacon Hornacek.

His goal is to do God’s will as a deacon.

“Once you realize it’s not about you, you become humble and allow God to work through you for other people,” he said. “It’s not so much what a deacon does; it’s what a deacon is.

“Jesus Christ is my model,” he added. “I want to model his approach; be aware, present and available, and questioning and challenging at the right time, at the right place and with the right people. That’s a good model for all of us.”

Regarding preaching opportunities, Deacon Hornacek, the father of four sons, ages 10 to 15, has mixed feelings. He has led adoration and Communion services, but is not at ease speaking in front of people.

“I really don’t like it,” he said. “You get nervous. At the same time, I love it because I feel that God can use me.”

Deacon Hornacek looks forward to serving both St. Matthew Parish and the Diocese of Green Bay.