HOLY HILL — The eyes of the golf world are focused on Wisconsin this week as the 117th U.S. Open Championship is scheduled for June 15-18 at Erin Hills in Washington County. Not only will the spotlight shine on the scenic, 11-year-old public course with its rolling terrain, but the Discalced Carmelite Fathers from nearby Holy Hill expect that their shrine will also catch the attention of some of the expected 35,000 spectators daily or millions more worldwide on television.

The majestic towers of the Basilica and National Shrine of Mary Help of Christians at Holy Hill are visible from 13 of the 18 holes at Erin Hills, and, in many of the images of the golf course, the familiar spires of the shrine perched on the highest peak in southeastern Wisconsin loom above. 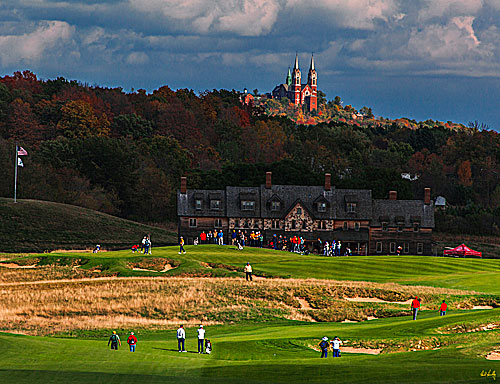 The twin spires of the Basilica and National Shrine of Mary Help of Christians at Holy Hill tower over Erin Hills in Washington County, home of the 117th U.S. Open Championship. (Paul Hundley | Special To The Compass)

“The U.S. Open is bringing many people to the area, exposing Holy Hill to people who might not know it’s there or might not have that opportunity to make that connection with Holy Hill,” Weston Banker, spokesperson for Holy Hill, told The Compass in a telephone interview. “People are going to be wondering what Holy Hill is, the big spires that are there. This tournament is attracting people to Holy Hill that may not have otherwise not been to it.”

From driveway to driveway, Holy Hill is three miles from Erin Hills, according to Carmelite Fr. Don Brick, recently elected the shrine’s prior.

In anticipation of more visitors to the shrine, the Carmelites have expanded the hours that the grounds are open June 12 to 18 from 6 a.m. to 8 p.m. and have added extra Mass times during the tournament.

“A lot of people are drawn to Holy Hill because of its physical beauty,” said Carmelite Fr. Michael Berry, who has served at Holy Hill since 2010, including three years as its prior. “It’s a unique place geographically and it can be seen for miles and miles. At the same time, it’s a place of welcome and hospitality for people who want to encounter God. Because of the beauty, they discover the one who created all of it and people should feel welcome to come and see and maybe satisfy their curiosity and then find hopefully a quiet place for them just to be still.”

The shrine, located on 435 acres of land in the heart of the Kettle Moraine, draws hundreds of thousands of people from throughout the world each year. A scenic tower, featuring a 178-step climb, offers breathtaking views of the rolling hills, including, for the past 11 years, Erin Hills, the public golf course built on land that formerly was a cattle farm.

In the weeks prior to the start of the golf championship, some of the visitors to the shrine included media, according to the friars. Local television channels, as well as the Golf Channel, sent crews to Holy Hill to film features on the shrine.

“We’ve been pleased with our interactions with the media,” said Fr. Berry, explaining that they took each media outlet on a tour of the facilities, including the main tower, the grounds and Outdoor Way of the Cross and inside the basilica, the massive Neo-Romanesque style church completed in 1931, featuring stained glass windows, mosaics, marble statues and a newly-installed pipe organ.

“There’s a fascination with what we do,” admitted Fr. Berry, adding, “at the same time, there is an openness on the part of the media, I find, to know more about us and to make our message known, especially a message of welcome and hospitality. The curiosity of others serves us very well.”

The Carmelite friars hope that people can gain a better understanding of the twofold role they play in helping others deepen their relationships with God.

“Our main role is to pray for people so we have an intercessory role, explained Fr. Brick. “But also as priests, we help facilitate their encounters with God through the Mass, through confession, so we’re here also to facilitate people in their relationships with God.”

A State of Wisconsin landmark which is listed on the National Register of Historic Places, the shrine traces its history to 1842 when the first Irish settlers arrived in the Holy Hill area. The first shrine was completed in 1863 and the term “Holy Hill” was used to describe it. In 1903, Pope Leo XIII declared it a shrine and in 1906, the Discalced Carmelites assumed stewardship of the shrine. It was declared a basilica by Pope Benedict XVI in 2006. 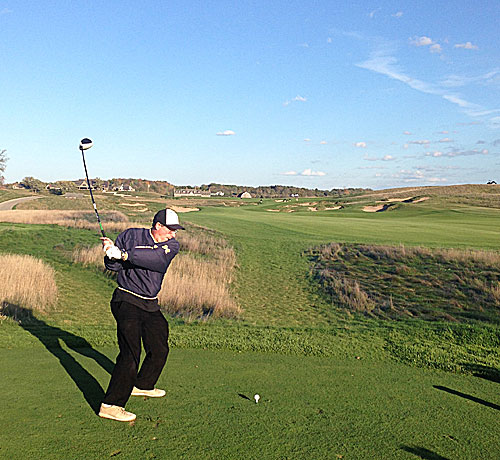 Fr. Brick has ministered at Holy Hill for 17 years, and as an avid golfer, he admitted he was thrilled when he heard that the former farmland near the shrine was going to be developed as a golf course.

“I had never thought of golf there, but I was happy it was being built,” said Fr. Brick who has played the game since he was 12 years old. “I knew when (Bob Lang) built it, he had a vision of having a U.S. Open there — especially when they hired Dana Fry as the architect, and Dana Fry is one of the architects for many U.S. Open courses, but it was never a for-sure thing.”

Fr. Brick also can boast first-hand experience of playing the course, in fact he says he golfs Erin Hills about once a year, and even had the opportunity to golf it before it opened to the public.

“I can say the course in comparison to others has a lot of natural beauty and a lot of scenic design to it. You’re in nature a lot so it’s very gorgeous in that sense,” he said, adding that he also appreciates the beauty of Holy Hill when he looks over and sees the shrine towering in the background of the course visible from most of the holes.

“It can be a really difficult course; if you’re in the bunkers, it can be pretty difficult, so you’ve got to stay straight and if you do that, you’re OK,” he said, noting that his best score at the par 72 Erin Hills was 89, while his worst was 105.

As a golfer, Fr. Brick said he sees a correlation between the game and spirituality. 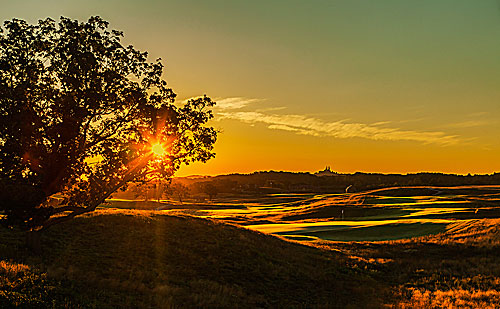 The sun rises over Erin Hills and Holy Hill, seen in the distance, in Washington County. (Paul Hundley | Special To The Compass)

“You’ll always have bad-hole days in golf, but you need to have perseverance to go out to the next hole and create anew. After you get your quadruple bogie or whatever, the next hole could be a birdie, you just never know,” he said, noting the same is true with spiritual life. “You’ll always have (bad) days. … We have those days, but in times of perseverance, there’s always newness in our spiritual life. We believe Jesus creates us anew as he says, ‘I come to make all things new.’ So there is that parallel that coexists very much between golf and a spiritual life. There is always perseverance on something new.”

Golf is fascinating to many, especially for those who play it, noted Fr. Berry, pointing to the solitary aspect of the game.

“Related to what Fr. Don said, (when on the links) you can discover you are your own worst enemy. These golfers will have tens of thousands of people watching them and sometimes in our lives, we can feel our life is on display, too. The challenge is to keep our focus and be able to let go of what is discouraging in the past and to keep our eyes on the Lord moving forward,” he said.

Enjoying the attention the golf championship is bringing to their community, Fr. Berry said they hope their presence adds to the experience for the visitors.

“We Carmelites see this as an opportunity to offer an awakening to people who are coming to enjoy golf. Maybe they didn’t expect something spiritual to occur, in the midst of enjoying the game, but just that by coming to see this place, it might awaken in them the beauty of our faith, or even further their curiosity so that it does not just remain with natural beauty, but they really want to better know the Lord.”